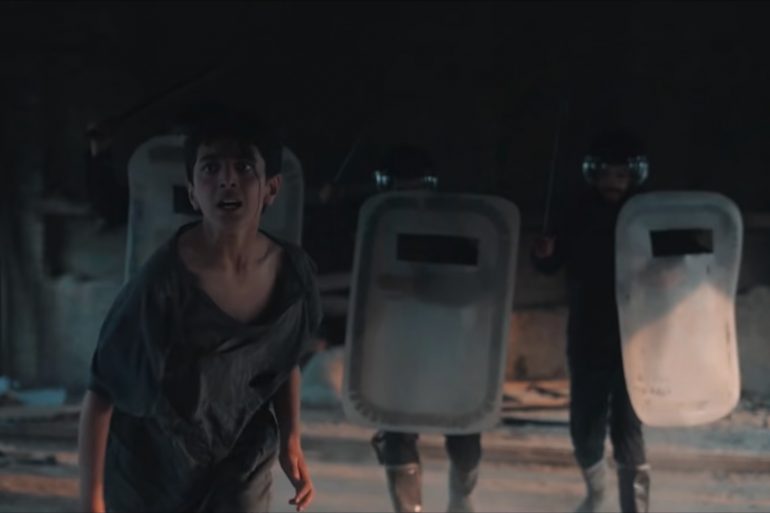 Agony – that’s the word that comes to mind when one sees the powerful
video that accompanies ‘Reham Karain’, the latest single by Srinagar based singer-songwriter Ali Saffudin.

“Written in collaboration with Zeeshan Jaipuri, the music video is a conceptual piece that seeks to express the pain and hurt felt by the losses we suffer in moments of conflict,” reads the video’s description on YouTube.

The music video’s writer and director Musa Tramboo depicts the narratives of different characters through the eyes of a young boy who is visibly torn apart by the destruction he sees around him.

The video begins with the boy fleeing from security personnel armed with shields and batons and rushing into different settings, each more harrowing than the last.

Scenes such as a toddler crying holding a telephone as a boot tramples on the
connecting wire and a man screaming in anger at seeing his pellet riddled face are heart-wrenching. Ransacked homes, blood splattered clothes and ash are powerful props.

As for the music, it starts out as a soft acoustic guitar piece which seems to be
waving a white flag, hoping for peace. However, the rage bursts out through power chords of an electric guitar as the song progresses. The lyrics swing from pleading to accusations, and have an overpowering sense of helplessness.

The song reaches feverish peaks when Saffudin hails higher powers in frustration to show the path out of this desolation. The drums and bass play thudding rhythms that sound like blows on the body, while the guitar screeches out hair-raising fillers.

‘Reham Karain’ was shot with a completely local crew in November 2020.