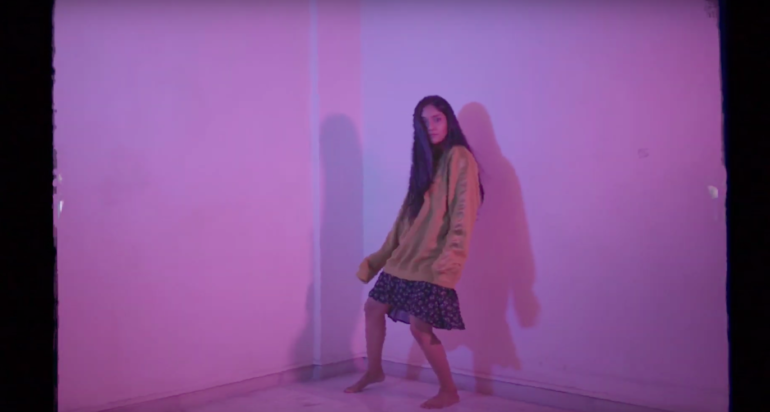 Edvard Munch’s 1893 painting, “The Scream” is frequently cited as one of the earliest examples of the expressionist movement. With jagged edges, exaggerated lighting and shadows and an almost unsettling warping and distortion of space and time, expressionist films and paintings focussed on evoking certain emotions, moods and textures that cannot be conveyed cohesively through language. Mumbai based producer, Noni-Mouse’s ‘Perry-Road’ fits squarely aesthetic, drawing from the abstract, haunting and angular electronic of albums like Kid A in her take on contemporary pop. The muddy percussions and incorporation of samples of guitars and vocals are awash with influences from hip-hop, ambient music and electronica. The haunting and warped vocals weave in and out of the instrumentation to create an entrancing spectacle against an industrial and grimy synth backdrop.

After studying music production in Vancouver over the past year, Mumbai based producer Radha Priya Gupta, aka Noni-Mouse is back to her homeland. Her prolific contribution to the Indian electronic scene includes performing with the choir Living Voices at NCPA and being part of New Delhi electronica group Tankbund. However, her recent batch of solo material has seen her honing her sound and perfecting her self professed identity as a “synth-and-sample fiend”. As one of the three tracks of hernoni pop EP released earlier this year, the song was named after Perry Cross Road in Bandra, Mumbai and is about day-dreaming and musing over your desires. The dreamy guitar work by Vancouver based guitarist Nathan Chan adds a hint of surrealism to the track.

The music video accompanying this track is just as indulgent, abstract and drenched in psychedelia. We are bombarded with spastically edited surreal images of people moving to the music and a desaturated colour palette. The video uses crashing computer programs against people with fake grins plastered on their faces. It’s glitchy, psychedelic, layered and opaque at the same time. noni-mouse has created an audio-visual experience that exists in a sphere that is dominated by abstract thoughts and emotions and isn’t weighed down by the limitations of language.