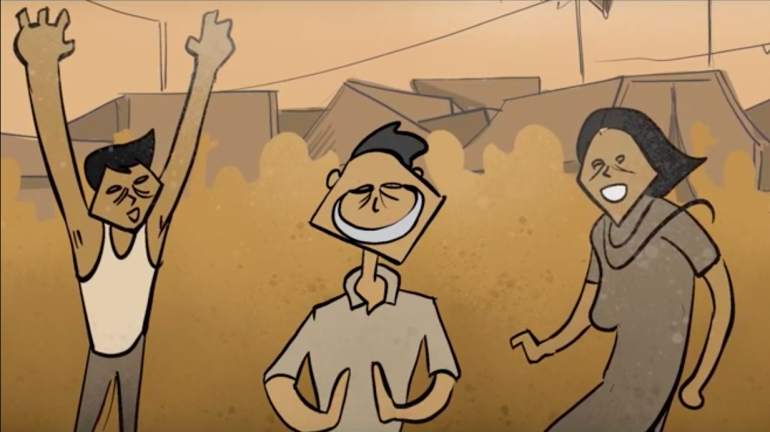 Do you think about the state of your country? The rusted, leeched upon insides of Indian society – superstitious, orthodox. And the white-cap wielding oppressors who stand on the stage, spewing poison in people’s minds.

It’s worse than that, believes Parashuraavan, a Rajkot-bred hip-hop artist who’s unafraid to say the truth – that we are consumed by the evil in power, that has spread across north India from his own state Gujarat.

His latest release, ‘Low IQ’ “questions injustices caused by governments who are in power”. It paints a horrifying image of capitalism consuming the masses, making them slaves.

The animated video by Birendra Singha is based on rough sketches of human life. It races through the events that has been overwhelming the land for the last decade, showing images of ‘patriotism is for sale’, the media licking the boots of white-cap wearing men, with tikas on their forehead.

The cover art shows masked people captive in a vessel that looks suspiciously like the Prime Minister’s flowing beard – it’s both a reference to the suffering caused by the pandemic and the stifling of freedom of speech.

The song delves deeper, talking about how he might be jailed for singing about such topics. It is dangerously political, depicting the real problems of hunger, poverty and rampant unemployment that is turning the country’s youth onto crime, just to survive.

The video was based on the concept of mob mentality – “The mob, infuriated by their own truths and beliefs based on false grounds, comes together to create a demon that eventually consumes everyone.”

His partner-in-crime is producer Owlist, a slick operator from Jaipur. He creates an alarming atmosphere, with ominous sirens and a red-hued soundscape, that is cut sharply by deep, distorted beats. The result is jarring – the song truly takes a lot from the listener.

Parshuraavan’s vocals are straight-laced, again with a strain of alarm. The song’s entire feel truly reflects the dark times we are living, where everything is distorted. It is as suffocated as the act of surviving in an oppressed atmosphere where the Supreme Leader’ shiny image is more precious than millions of burning bodies.