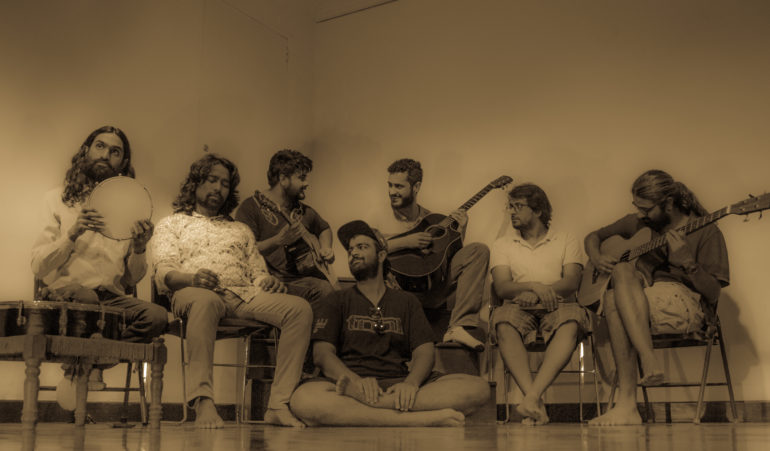 As the famous anecdote goes, someone once asked noted poet Faiz Ahmad Faiz – how is it that his poems are still relevant as if they were written in this very moment? To which the poet replied, “Aap log haalat hi nahi badalte, hum kya kare? (the reality has not changed, what can I do?)”

One of Faiz’s popular works has found visuals and sound, thirty-five years after his death, in the form of Dastaan LIVE’s latest multi-art experience ‘Mat Ro Bachche.’ Based on the poem ‘Philistini Bachche Ke Liye Lori’, the song is a result of a month-long arrangement that begun with vocalist Sudheer Rikhari humming the lines during a rehearsal on one fine day. The visual concept revolves around shadow puppetry as a medium, brilliantly depicting the victims, the perpetrators, the guilty and the innocent as shadows on the wall.

“With such powerful words, our arrangement needed to do justice to the poem, at least in the way we interpret it. Given that the words are as relevant today as the 1980’s – when they were written, it’s only natural that it would generate conversation, and that in essence, is the main aim behind Dastaan LIVE,” informs guitarist and co-founder Sumant Balkrishnan. Filmmakers Anant Raina and Shupriyo Maitra joined the process in June 2019. The narrative of ‘Mat Ro Bachche’ is of a child who has lost her loved ones to conflict. The story goes that Faiz penned this poem while he was visiting Beirut in 1980 and Israeli gunships were targeting civilians, including those living in Palestinian refugee camps.

Known for innovative use of everyday, inexpensive materials and projection mapping, Dastaan LIVE has created distinct formats to their shows so far (25 overall), from an intimate baithak to a full-blown audiovisual experience. The collective plans to launch a performance/workshop space soon in New Delhi that will cater to experimental art or art in a similar vein to the work of Dastaan LIVE.

With two more song releases in the pipeline for the year, Dastaan LIVE can be experienced in Delhi in September for a music festival called ‘YARI’ and with shows at the Serendipity Arts Festival 2019 in Goa, later this year.