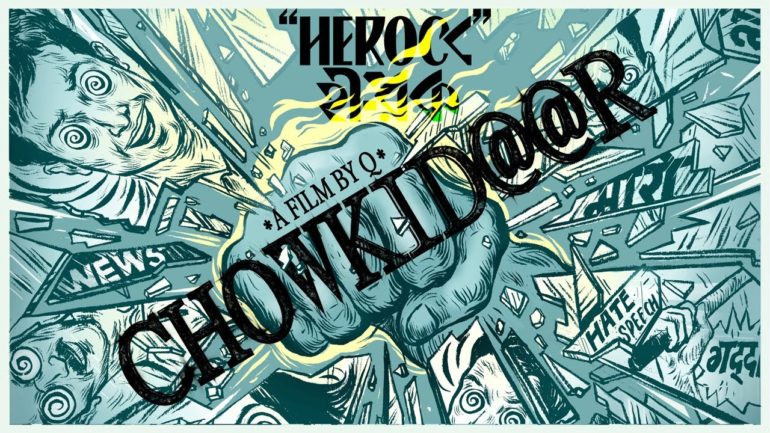 In the span of two minutes over a slick bass blip beat from Dub Sharma, rapper Sumit Roy fires his second salvo on ‘Chowkidaar’, his latest single from the upcoming album HEROCK.

While ‘Baari Hamaari’ was fed by the serpentine production of Dub Sharma to become an anthemic tune, ‘Chowkidaar’ is much more cut-throat and verse-driven in its intent. Roy lets fly all kinds of quick barbs about police brutality, the disappearance of JNU student Najeeb Ahmed, the cost of Rafale fighter jets and more in his low voice. His use of “one side” in the lyrics could be a nod to the catchphrase used by Mumbai rapper DIVINE, but the flow comes across as acerbic as possible.

The visual identity of all his work, which is another one of Sumit Roy’s strong suits, accompanies the song. Roy said in a statement, “The song is ironic and the visuals add to this uneasy feeling.” With HEROCK aiming to bring in several visual designers (Roy also works in visual art) and filmmakers, the video for ‘Chowkidaar’ is directed by Kolkata filmmaker Qaushiq Mukherjee aka Q.

The harrowing visuals show Roy along with actors Sharanya Narayanan and Shiwangi Singh seemingly cuffed together or at least walking hand in hand, perhaps symbolic of being unified but also facing the looming threat of police action of protesting. Through the claustrophobic lens of Q, the trio is also shown dressed as cops, which might point to a dichotomy. Q says in his statement, “We wanted to depict how we are constantly being played against ourselves by a system that is corrupt and bigoted. We, as citizens, may be harassed. But we are also the police, the bureaucracy and the cog in the machine.”

The video also features animated drawings that range from lyrics in Hindi to a brief glimpse of comedian Kunal Kamra, a friend of Roy. It’s perhaps a tip of the hat from the rapper, considering ‘Chowkidaar’ was created in 2019 as an intro and outro music clip for one of Kamra’s comedy skits that went up on YouTube.