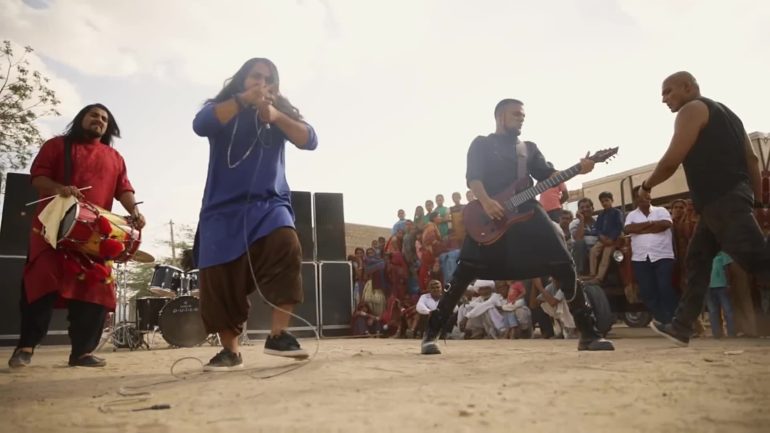 Watch: Bloodywood goes off the rails on Machi Bhasad

New Delhi-based metal outfit, Bloodywood has released its latest politically charged music video, ‘Machi Bhasad’, which is an explosive and high octane rampage from the get-go.

Bloodywood is no stranger to powerful metal riffs and disposable drum sets. Since its formation in 2012, the pioneers of the blend of Indian folk and nu metal have continuously shaken the metal-verse with every new release. In doing so, it also makes a point to enthral as well as invigorate with a socially conscious edge. Its vision was spawned from a well-received cover of Linkin Park’s ‘Heavy’ and from then on, frontman Karan Katiyar made it a point to “destroy pop songs”. Their singles feature a unique blend of nu metal and rap-metal aesthetics with homegrown folk tendencies.

In the music video, the band rocks it out on a sunny day under a clear sky in the middle of sprawling wheat fields and dusty village roads. A bhangra troop jumps in and out of the frame to boost the music video’s energy through the roof. The band’s newest member, rapper Raoul Kerr marches aggressively towards the camera, which seems to be hastily looking for cover, and urges to ‘break the camel’s back’. The camera movements are chaotic, energetic and uncompromising with temperamental and mercurial edits to give the video its nasty and aggressive edge. To cool things down after the five-minute rampage, the video takes a wholesome turn with a few behind the scenes footage of the band just chilling with the locals who feature in the music video.

The band is set to embark on their Raj Against the Machine tour in Germany starting on July 13.