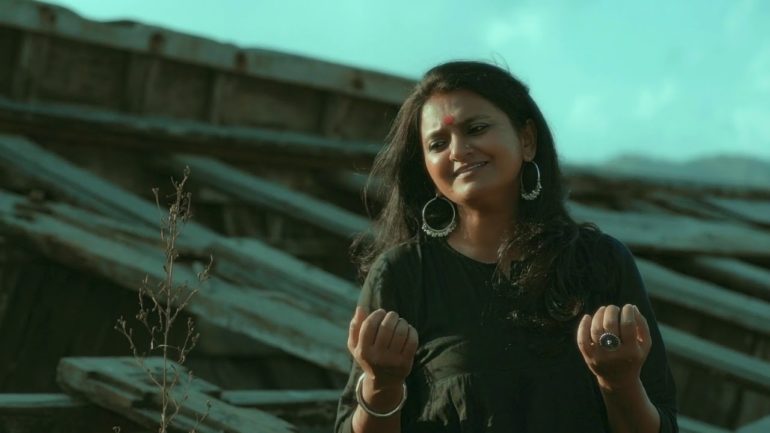 Composed and sung by Radhika in collaboration with Goonj, a non-governmental organisation, the song aims to raise funds for migrant labourers and daily wage earners during COVID-19. ‘AsāN’ is about communing with the divine from within the spaces of one’s home, finding one’s sustenance within communities and dancing the dance of the universe (‘jhurmut’).

Radhika composed ‘AsāN’ in 2017, when she started out on a collaboration with dastangoi Ankit Chadha for a musical narrative on Shah Hussain. However, Ankit’s untimely death in May 2018 tragically put this journey on hold. Seven months later, she set out on another collaboration called ‘Faqeer Nimaana’ with Kathak dancer Sanjukta Wagh, which explored Shah Hussain’s poetry. ‘AsāN’ became part of that piece. It was during this time that she met musicians, Hitesh Dhutia and Vinayak Netke, who arranged the music and also played the guitar and the rhythm in AsāN’s soundtrack. In January 2020, Alleyah Asghar, whom Radhika had known closely for many years, directed the track’s music video. It was all set for a 13th April launch to coincide with Baisakhi this year. However, the Covid-19 pandemic had engulfed the world by then.

Radhika was initiated into Hindustani Classical vocal music training in her early school days. After an MBA from XLRI Jamshedpur and corporate stints with Unilever and ANZ Grindlays, she decided to pursue music full time. She became a disciple of veteran Dr Sushila Rani Patel, and is currently under the tutelage of Shri Dayal Thakur. An Akashvani artiste, Radhika won the ‘Radio City Super Singer’ award in 2013.

Radhika stepped into the world of Sufi music through the Kabir Festival in 2015, where she performed a musical narrative on Sufi mystic Bulleh Shah’s life and poetry. Ever since, she has performed at the Malwa Kabir Yatra, Rajasthan Kabir Yatra, World Sacred Spirit Festival, The Old World Theatre Festival, NCPA’s Sufi Music Festival Sama’a and the Mystic Kalinga Festival.

The song will be out on other streaming platforms on May 8.