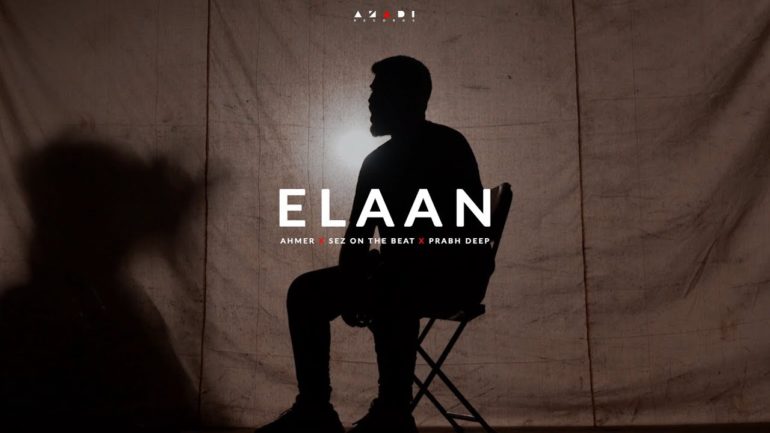 Watch: Ahmer and Prabh Deep call for a fiery resistance in Elaan

Srinagar-based rapper Ahmer has teamed up producer Sez On The Beat and New Delhi-based rapper Prabh Deep to release one of the sharpest anti-establishment track of the year. The trio trains their gun at all those who silence dissenters, label them as ‘anti-national’ at the drop of a hat and turn a blind eye to human rights violations.

The song begins with a shot of a noose around Ahmer’s neck as he traces his Kashmiri lineage and narrates his story. He calls his home ‘the most dangerous place on the planet’ as the visuals steadily get more chaotic to mirror Ahmer’s picture of the valley metaphorically. Ahmer doesn’t mince his words while highlighting the human rights violations and oppression in Kashmir through his razor-sharp songwriting, often switching between Hindi and Kashmiri.

Prabh Deep’s verse shifts the conversation to the culture of hate in the country, where voices are deliberately silenced. His verses call out the hypocrisy of the government, in the line, “Iss geet do baad / sarkar mere peeche lage honi / mai nu kar dena ghoshit deshdrohi” (After this song, the government will come after me. They’ll call me an anti-national). The lyrics are vivid and stern enough to make the listener’s think about the current socio-political scenario. The video employs visuals like men in prison uniforms standing with handcuffs on, and a flaming microphone and nooses, which may seem done to death in this genre of music, but the way each shot is lit and executed is a sight to behold.

The song is a testament to Azadi Records’ prowess to use music and art as harbingers of change and resistance and its willingness to make bold signings. It also showcases why Sez On The Beat, who has chiselled a truly unique sound for Ahmer in Little Kid Big Dreams, remains to be the go to producer for Azadi artists.