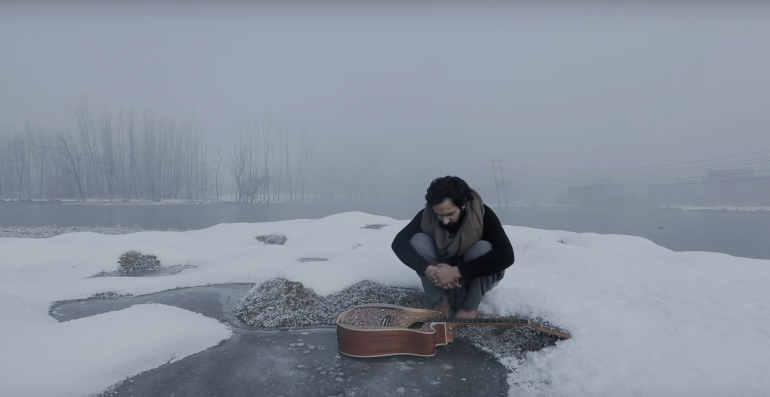 Zeeshaan Nabi, the frontman of Srinagar-based rock based Ramooz, is extending his experimental musical skills beyond the band’s compositions. In his latest single ‘Almeeshaan’, the singer-songwriter has touched upon something new and novel – music made from continuous ‘stream of consciousness’ as he puts it.

In simpler terms, it means that this song was not written earlier and finalized after several rounds of polishing. Rather, the artist started singing and playing organically, and the resultant composition is ‘Almeeshaan’. This is evident in the rawness of the song – in some parts, the words are subdued behind harmonies or the guitar parts blare louder than others.

There’s an inherent eeriness that is reflected in the haunting video as well. Shot in the exotic locales of wintry Kashmir, it shows the protagonist – a musician – in a dishevelled, frustrated state with a broken guitar. This is very symbolic, as the instrument is the vessel through which the musician creates his art, and that itself is broken. On a philosophical level, it points to a broken creative spirit.

This analogy is compounded when the protagonist throws his guitar away in frustration, and runs in despair through snow-covered meadows to reach an abandoned shack in the middle of nowhere. That is when the morbidity of isolation strikes home. The music also reflects this agony, especially in the synchronized vocal harmonies that lift off from the chaos of erratically played guitar lines.

Thematically, the song is produced “as the journey of a person who confronts different and opposing facets of his personhood. ‘Almeeshaan’ also reflects on the struggle that artists face in trying to break away from norms and traditions to exist as they are in a pure and unadulterated form.”

This is something that all artists have to grapple with, as conforming to norms presents a better chance for survival. The alternative can even lead to oblivion – as reflected beautifully in the last shot where a Venetian mask, symbolizing the artist’s identity, burns quietly.