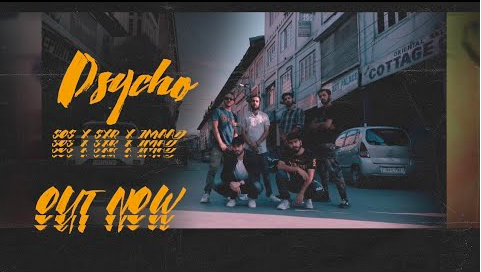 Ever since Ahmer released his debut album Little Kid, Big Dreams, the interest in ‘conscious rap’, that is rapping about serious social issues and protest music has risen manifold. Perhaps no other place in the country would have as much talent in that field as Kashmir does. ‘PSYCHO’, a hip-hop track by four rising stars from the region, tackles issues plaguing their homeland and ponders their own future.

Featuring hip-hop duo SOS along with rappers Sxr and Imaad, the song walks the listener through their hopeful childhoods and their dreams. The production is done by Prophecy, while the mixing and mastering were done by Ahmer himself.

The video combines some striking edits and uses a variety of filters, but features some unmistakeable shots of the singers with an empty Srinagar in their background. The edit was done by Syed Arsalan, one half of SOS, otherwise known by his stage name Aatankki. Along with Arsalan and his partner Tufail Nazir, the video also features MC Kash and Ahmer; Sxr and Imaad join in to rap their parts in the music video as well.

Explaining the title of the song, Sxr aka Mir Gazanfar explains the usage of the word “psycho”, clarifying that it is not used in an offensive or pejorative sense. “Psycho is a slang term used for a person who is mentally unstable/sick or a sufferer and as we belong to the place where there is no mental stability at all,” he writes on his Instagram.

“We make music, we are musicians. Those who don’t understand why we do it, call us psychopaths and whatnot,” he said.

“So this is us, we put our passion first, we come from a place where there is no mental stability at all you can call us psychopaths, we are better that way,” concludes the quartet, describing the track.
Koshurhiphop, as the genre is coined, might provide the next set of protest anthems. Although nascent, conscious rap is here to stay- and ‘PSYCHO’ proves to be a great start to it.