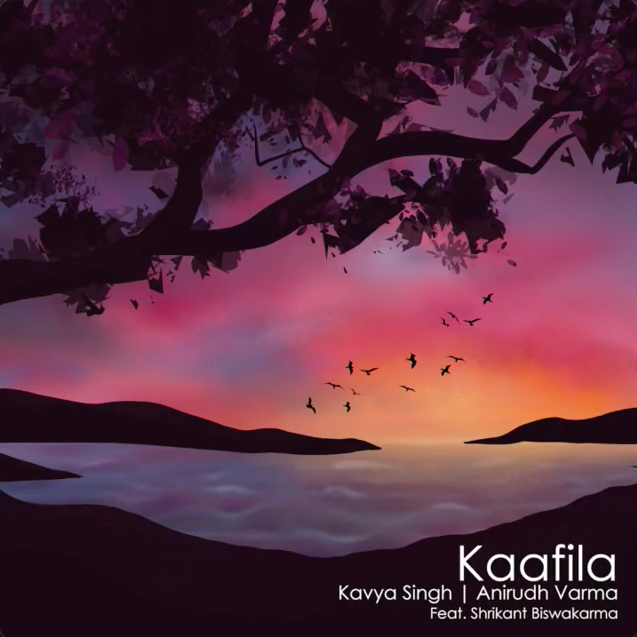 New Delhi-based duo of pianist-composer Anirudh Varma and singer-songwriter Kavya Singh have released their third single together, ‘Kaafila’, an ode to the human spirit. Like their previous releases, the song is both emotive and a timely release. It is undercut by the kind of gentle upliftment we could all use right now, anchored by a refrain we all need to hear every so often: “Hans ke guzaar le isse/Ye tham kabhi na paayega/Zindagi ka kaafila yuhin/Chalta hi chalta jayega”.

Penned by Amarjeet Syali, the single also features fretwork by Shrikant Biswakarma of Hindi rock outfit Antariksh. Once the songwriting was complete, Varma came up with the piano riff that serves as its central motif while Singh composed the melody. It was originally envisioned as a minimalistic piano track.

This can be gleaned from the initial half of the final version song, which slowly launches into an orchestral crescendo by the third verse that’s bridged by a colorful strings section and virtuosic guitar solo. The triumphant instrumentation and cascading melodies provide the perfect backdrop to carry Singh’s rich timbre.

The single provides a thematic resolution of sorts in the narrative arc that emerged across their earlier releases, ‘Pal’ and ‘Baat’. “The sequence of the three songs wasn’t intentional, but an underlying emotion of bittersweetness runs through all of them. ‘Pal’ was about celebrating the moments in life, ‘Baat’ about celebrating companionship and ‘Kaafila’ is the celebration of life itself,” explains Varma.

The two put special consideration into the instrumentalists they rope in, who contribute a new layer to their unique blend of sound. “We believe less is more. With every song, we try to make sure the composition can breathe,” he adds.

The duo’s fourth single is currently in its pre-production stages. Listeners can also be on the look-out for an acoustic piano version of ‘Kaafila’ in its upcoming music video, which will reflect its original arrangement. Talking to A Humming Heart, Varma also teased the impending release of his Collective’s second studio album. With Singh and Biswakarma as members, along with dozens of instrumentalists and vocalists across India, he revealed that the project is nearing the stages of completion. Apart from that, both artists have lots of exciting collaborations in the pipeline.