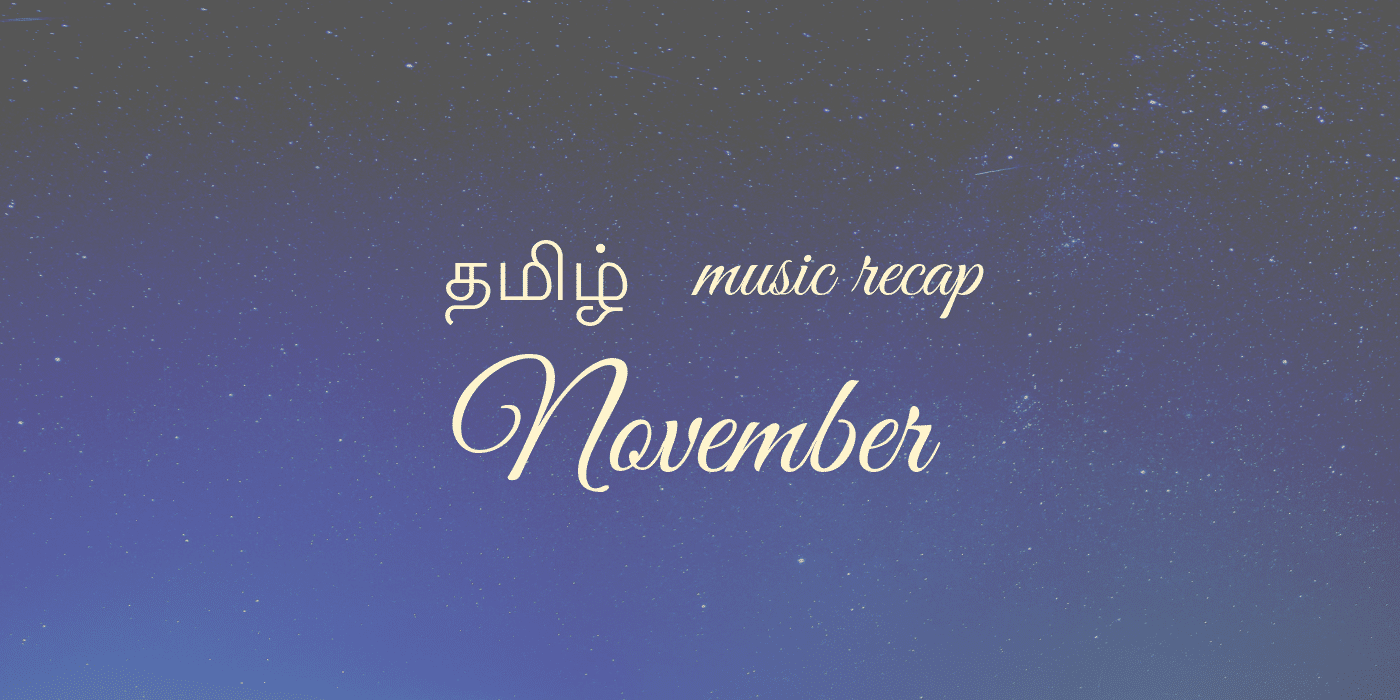 Only a handful of Tamil songs were out in November; in fact, no new albums appeared in the entire month. Think Music (keeping up with its consistency) released the original background score of Pariyerum Perumal (by Santhosh Narayanan) and Enthiran (by AR Rahman), admittedly just shy of a decade too late but warming up to the release of its sequel 2.0. So here is a short playlist:

The third and final song of the 2.0 soundtrack is easily the best. Perhaps, it also tops the compositions by AR Rahman this year, so far. The voices of Bamba Bakya, AR Ameen and Suzanne D’Mello all come together very well in this classic, early-day Rahman track. The words by the late lyricist Na Muthukumar are wonderful, and bring forth the crux of the movie.

The first single ‘Ayya’ from Seethakaathi featured in the last month’s playlist. Govind Vasantha goes above and beyond in the second, brilliant, single ‘Avan’. The song is beautifully arranged; the way the song builds up adding layers as it makes its way to the mid-segment is a delight. Harish Sivaramakrishnan (of Agam) breathes life into this song and has such an appealing quality. The song rivals Govind’s compositions in the year’s best soundtrack ’96.

AR Rahman and director Rajiv Menon come together decades after their blockbuster soundtracks Minsara Kanavu (1996) and Kandukondain Kandukondain (2000). The title track of the movie Sarvam Thaalamayam sung by Haricharan, and backed by Arjun Chandy, is all about ‘Thaalam‘. The song is a fusion of sorts, blending in beats of various forms, genres and instruments. The words, penned by Madhan Karky, have a nice ring to them. The album, with 5 more songs, is expected to be out over the next few weeks.

Yuvan Shankar Raja composes for the sequel to 2015 movie Maari (with a hit soundtrack by Anirudh Ravichander). Actor Dhanush and Dhee sing the first single ‘Rowdy Baby’. The song seems to be a rage, given the catchy folk/kuthu tune it is. Dhee has a wonderful presence in the song, and she sounds amusingly different from her past work. Though, lyricist Dhanush is not exactly shining in this instance.