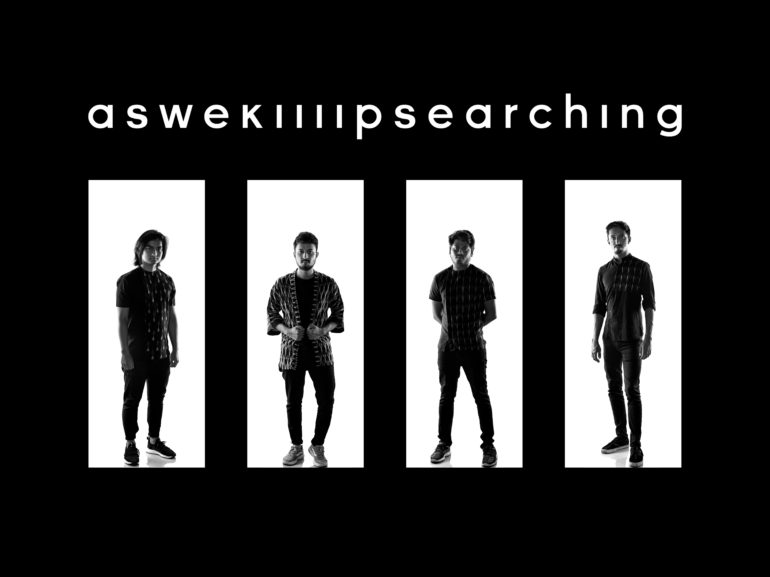 Get the first look at Aswekeepsearchings third LP Rooh

Over the phone from Vadodara, swekeepsearching’s frontman and founder member Uddipan Sarmah says, “I wasted a lot of my time comparing myself to the bands and artists who are doing great in India.”

He’s not trying to sneakily say he’s looking to bands overseas, but more about carving this own path with the Hindi post-rock band. On their forthcoming third album Rooh, which will release on September 27th and have first single out on August 9th, embraces minimalism. Sarmah, who is in the midst of a listening session tour similar to the one undertaken for 2017 album Zia, says, “We as humans, at this point of time like white walls, and like, maybe one piece of furniture in one room.”

For the eight-track album, the band commissioned New Delhi-based visual artist and designer Aaquib Wani to create a new logo and type design and Bengaluru-based illustrator Anoop Bhat for a striking yet minimal album artwork.

Wani, who started out working as an visual designer for bands in the capital (plus, graphic work for Rock Street Journal), has since climbed his way to art and fashion circles. But he says he did want to work with independent artists once again. “Bands don’t think this way usually. This was challenging but fun.” The four lines that replace the two ‘Es’ in the band’s logo also represents the four members, including drummer Sambit Chatterjee, who grew into the role after the recent exit of Gautam Deb. Sarmah says Deb’s exit was looming but remained amicable and formal, with a no-brainer to turn Chatterjee – who’s contributed to tabla and additional drums to Zia and their live shows – into a permanent member.

Bhat, for his part, was asked to create something that fits within the newly embraced aesthetic of minimalism but also “something iconic, something bold and something that had immense recall value”. He adds, “I put off all the other work for the day and listened to the entire album twice in one sitting. The final artwork you see on the cover is what I visualized in that time.” Bhat, who has illustrated art for the likes of Opeth, Anathema, MONO and Indian bands such as Parvaaz and Death By Fungi, is also working with visuals and light show designer Vishal Gore to incorporate album and track artworks onto the screen.

Sonically, Rooh is not exactly about minimalism. Sarmah points out that they do like to let guitars ring out, but adds that they are “about saying simple stuff”. He continues, “But yes, we add layers. So that’s why it makes it sound huge and open. At the end of the day, the basic structure of the song is very simple. Maybe a talented musician will laugh at us.”

As the record gets prepped, Sarmah has been setting up more listening shows across the country that’s drawing more people. This month, fans can hear Rooh in full at listening sessions in Chennai (August 10), Bengaluru (August 11), Kochi (August 24) and Hyderabad (August 25).