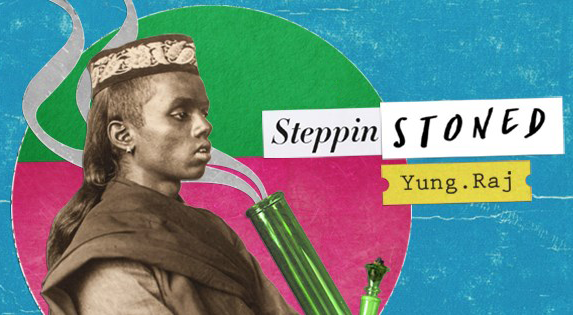 In his second release of 2019, Steppin’ Stoned, Hyderabad-based electronic producer Yung.Raj takes a sideways shift into the world of footwork.

An active proponent of the independent scene in India, Raj Verma has had many fingers in many pies over time. Well-versed in rhythm, he has shared stages with Karsh Kale, Niladri Kumar and Foreign Beggars, while being a formative part of acapella outfit Voctronica.

As the prolific Yung.Raj, Verma dove into and channeled L.A. beatmakers like Mndsgn and Knxwledge. These experimentations led to three tapes between 2018 and 2019 – Laced Loops, Waterpipe Dreams and Recovery Package. These relied heavily on hip-hop as a direction and lo-fi as an aesthetic, with smart sampling and dreamy textures.

Originating from “a few shows with DJ Paypal earlier this year, which were inspirational,” Steppin’ Stoned holds five tracks armed with plenty of danceability and frenetic energy. ‘Lights Out’ starts off on familiar ground while gently introducing us to the new direction that the artist is trying to explore. A smooth brass synth opens ‘Rose Tint’ and meets up with a wonderfully accented breakbeat; a sleeper dancefloor hit if there ever was one.

Verma credits the next track, ‘Lifted’ as his first foray into this area of beatmaking. The song is reminiscent of Govt. Plates-era Death Grips, featuring some glitchy pings and pongs within a packed backbeat. ‘Ruff Sounds’ ropes in reggae samples, while ‘SupaTroopa’ artfully appropriates Alaipayuthey’s ‘Yaro Yarodi’ into a great closer.

While his earlier works provided a more linear picture of his influences, Steppin’ Stoned is an effective indicator of a producer unburdened by limitations like genre and style. The ideas seem brimming with confidence and potential while still feeling casual and unserious, “because everybody needs to party sometimes!”