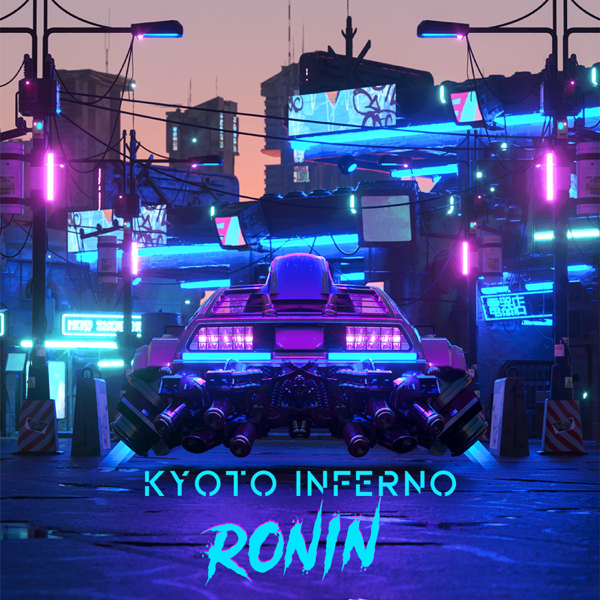 Perpetually attempting (and nailing) on-stage chaos with Mumbai metal band Providence, guitarist Shezan Shaikh pressed pause for a while as he figured out making a living as the owner and runner of his studio, also called Providence Recording Studio.

Along the way, he’s clearly been drawn back to writing and playing music that’s ready to make bodies move. Of course, this might be different kind of moves, considering his synthwave project Ronin’s debut EP Kyoto Inferno places itself squarely in the nostalgia-leaning yet surging electronic space. The four-track record was in the works for just under half a year, with Shaikh taking apart from the project’s sound and rebuilding it in the last five months. It became less about his love for the glimmering synths peppered in his favourite 80s glam bands like Def Leppard and more about a cinematic synthwave visibly marked with a metal stamp.

On the opening track ‘Ragequit’, Ronin makes an entrance formidably with a vocal sample that plays on the now culturally famous line “Rage against the dying of the light” (from the Dylan Thomas poem) except with a buoyant, pop melody. There’s wavy, somewhat understated string-pulling that is placed between commanding synth lines and beats. Like the best kind of synthwave, it comes across immediately as great music for a late night drive. But even if you’re indoors at home, the wistful ‘Illuminati Afterparty’ is anchored in guitar riffage and distorted synth basslines, which show up the sound of Ronin as something that can build up to something heavier, but it burrows into a dreamier realm instead.

While female vocal samples are woven into the track so far, Shaikh calls on two known voices for ‘Kyoto Inferno’ and the closing ‘Kyoto Inferno (Soul Remix)’. Dangling East Asian melodies as an ingress, there’s real grit and cinematic treatment on the two tracks which makes it sound like it’s straight out of a video game like Street Fighter or even a noir film. The glimmering synths make for the sonic hook, while vocalist Shagun Trisal (previously of rockers Kraken) breathes life in as he soars on the original mix, while former Providence frontman Sunneith Revankar (previously part of Bhayanak Maut and now with Undying Inc and The Silent Offensive) lays out an anguished growl over warbly guitar riffs on the Soul Remix.

With a formidable first step into the nostalgia-tinted, neon-painted world of synthwave, Ronin makes Kyoto Inferno a refreshing listening experience that leaves room for plenty of experiments.