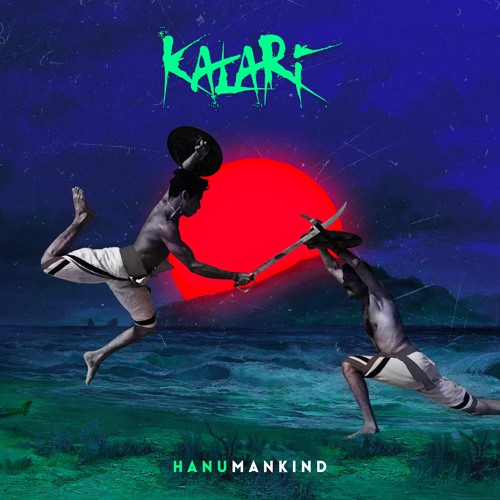 The winner of the 2017 edition of the Mic Drop Tournament, Suraj Cherukut aka Hanumankind has dropped his debut album titled Kalari late last month. This 4-track rap album is the result of eight months of writing from Hanumankind and production by Nikhil Kalimireddy aka Kalmi, Parimal Shais and 47k.

Kalari means battlefield and is an obvious nod to the oldest surviving martial art tradition in South India. Its artwork has two practising Kalaripayattu practitioners sparring in the backdrop of mountains and the ocean in neon-like hues of dark blue, black and green with a gleaming bright red sun as its focal point.

“Early morning riser, late-night sleeper, bags under the eyes and got these bags under the seats bruh!” asserts the Kerala-born rapper as he advocates everyday hustle, shunning the established codes of living and the debilitating downsides of standing still and waiting for the right moment in ‘Wildshit’ which acts as the curtain-raiser for the album.

‘Southside’ sees Hanumankind, who moved to Texas as a child and moved back to Bangalore in 2015, embrace his roots with a mellow but groovy, lilting Tabla based intro. As one unsuspectingly waits for what is to come next, a torrent of words are unleashed through the flow of the verses; akin to a hurricane hitting the tin roof of an abandoned shed and blowing it off the top of the structure. ‘Bottle of MH’, perhaps the most musically inclined song with sung vocal lines, harmonies and pop chord structures explores themes of a lost generation struggling to make their voice heard above aimless drifting and mental self-flagellation.

The lyricism is worth listening to as he says “Burdens on your spirit keep you down like torn Achilles, we’ve been taught to hide our feelings and never let it get too close, keep a distance, indifference and a lack of empathy. The most respected in these streets, forget what makes you weak, remember what you about baby, this your legacy”.

The album seems to be a taste of much more to come given that it is at just about 15 minutes and four songs long. Inspired by artists such as Houston, Suicide Boys, J Cole, Joyner Lucas, Lupe Fiasco, Kendrick Lamar and Smokey The Ghost, he’s keen to avoid falling into the trap of chasing punchlines and instead focus on delivering songs entailed with a message and a concept around them.