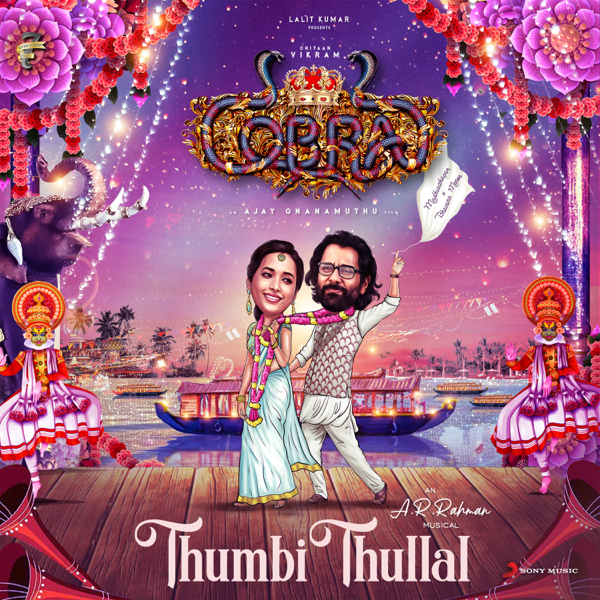 Sony Music sprang a surprise on us earlier this week, announcing a single from the upcoming Vikram-starrer, AR Rahman-musical, Tamil film Cobra that is still in the making. This was out of the blue, especially when there’s no word out on composer’s songs from movies releasing very soon like Dil Bechara.

The announcement of the song, ‘Thumbi Thullal’, was led by a very colourful cover art modelled after a wedding invite featuring the lead characters of the film. The art is a reflection of the wedding theme and the blissful celebratory mood the song takes no time to register. The opening Malayalam lyric is a festival song and is an instant throwback to the composer’s most famous wedding song from Dil Se set in the backwaters of Kerala.

The song has a very busy arrangement of classical instruments throughout (watch out for a fantastic interlude that transports you to the wedding scene), complex structuring and a tune that is not often easy to follow amidst several sounds fighting for attention. But when Shreya Ghoshal lands the opening ‘Thumbi Thumbi’ note following a meandering tune and onomatopoeic sounds, the song materializes and how.

‘Thumbi Thullal’ has not one but two lyricists (Jithin Raj and Vivek) falling acutely short of what the tune demands. AR Rahman is badly in need of a lyricist who can pick words for his meters and fresh thoughts for these text-book situations.