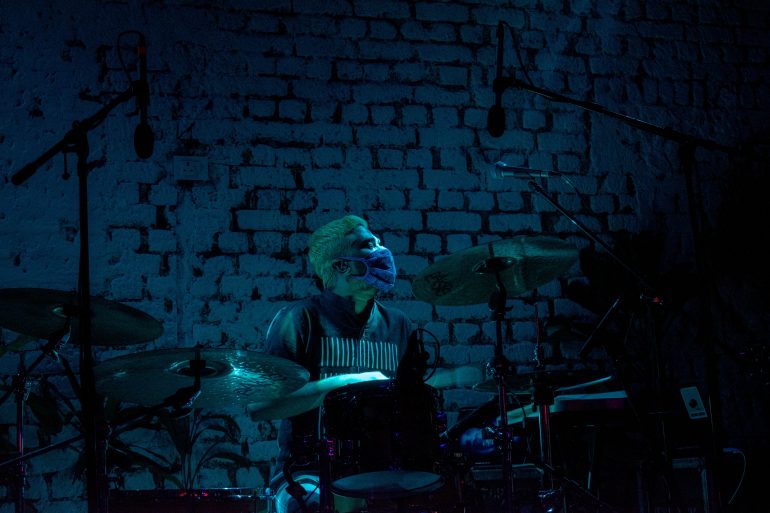 Whats it like to attend a physical gig during a raging pandemic?

When AHH last spoke to aswekeepsearching’s frontman Uddipan Sarmah in April about how Covid-19 had affected the Indian independent music industry, he remained doubtful of performing again this year.

“I’m not sure if we’ll even have any gigs for the rest of 2020. Our outlook has shifted to 2021,” he said then. Sarmah had enough reasons to be sceptical. With cases rising, hospital beds seemed to be at a premium. Citizens were not following norms, and restaurants and performance venues were the first to be shut, and seemingly last to be allowed to open.

So it was a welcome surprise for the post-rock unit to take the stage just seven months after raising their concerns, playing at Mumbai’s antiSocial in Lower Parel. Sarmah acknowledged the situation as much. “Coming on a stage after 8 months almost feels new. In 8 months, we hardly met. It’s been a very weird journey,” he said while addressing the crowd between the songs.

The Pune-based band played a set that lasted for over an hour, running through their hits. Each song seemed to have a different tinge compared to the studio recording, but was ultimately a fun experience for their listeners— it felt rewarding in its very sense.

This was also aswekeepsearching’s first performance since guitar and keyboard man Shubham Gurung left them to pursue a more spiritually fulfilling path. “His priorities have now changed and he has decided to focus his energies on his path to Spirituality and practising Christianity, and we wish the best for him on his new journey,” they said, adding that they will be looking for his inputs moving forward as well. Gurung’s absence was fairly noticeable, most notably in frontman Sarmah being constantly armed with his guitar. Bassist Robert Alex was allotted drummer duties on a couple of occasions as well.

Usually, percussionists are drowned out of any live performance; relegated to the background while their more mobile bandmates make their way around the stage. This did not hold true for Sambit Chatterjee, who was arguably the star of the show. Sporting a striking blond hairdo, Chatterjee was providing harmonies and playing the keyboard, apart from his usual drumming. At one point, he used the mic stand as a surface to bang his sticks against, fully immersed in his craft.

The band’s remade version of ‘Uns’ was the night’s most outstanding performance, elevating the song from Zia to a new level. I must say, I could get used to socially distanced gigs henceforth. After all, the allure of not rubbing your face into someone’s armpit while grooving to a guitar riff is almost too attractive to ignore. The gig had about 30 attendees, and theoretically, allowed for people to space themselves across antiSocial’s fairly spacious venue. However, as the gig went on, more people crowded around the middle— an inevitable consequence.

Perhaps the most worrying of all was the constant sight of people’s uncovered faces. While it is understandable that people at a gig would like to sip on their LIITs, the management at Social could have done a better job of reminding its patrons to ensure their noses are covered. Although their employees were masked up and wore gloves (the servers were even wearing face shields), people who came in groups were especially not worried about anyone but themselves. Some strict enforcement of Social’s own rules— hell, even a kind reminder through either an announcement or telling people personally— would serve better than nothing.

Moreover, the screening process remains poorly handled. The temperature guns are as useless as they have become ubiquitous. Social would do better to invest in a few oxygen saturation monitors, which would be a better indicator than the temperature gun that refuses to budge from 3.6 roentgen 35.4° C. Of course, this is not a problem restricted to the venue— it affects any establishment, from airports to offices.

So, should you attend the next gig of your favourite artist? Attending a gig didn’t seem that different from going to a restaurant, or taking a flight. At the heart of it, you’re choosing to be with a set of people who have their whims and idiosyncrasies. With or without you, physical gigs are back, and they are here to stay. If you, in all good conscience, can do that without worrying, then definitely go for it. Who knows, beyond the anxiety that comes with a pandemic, you might even have a bit of fun.