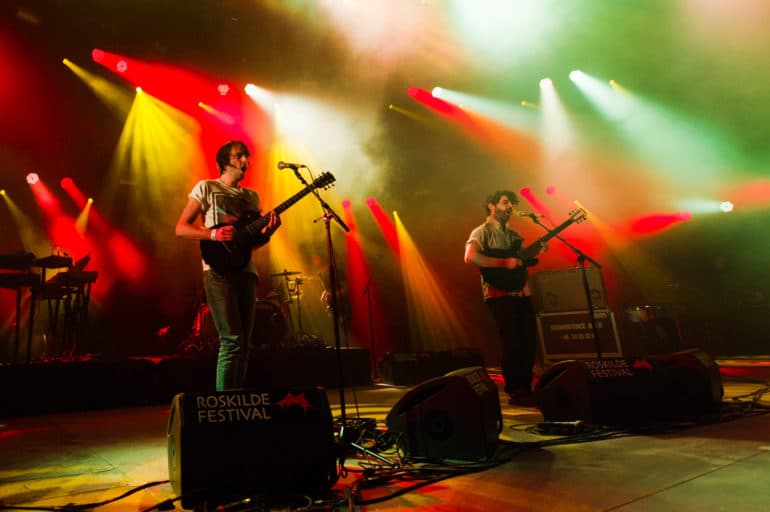 One of the behemoths in the indie rock scene, Oxford-based band Foals have it all in their repertoire. From anthems that could fill arenas all over Europe and the US, to their live shows, which have earned them acclaim wherever they have performed. They have done all, while expanding their sound and going from strength to strength, mixing in elements of atmospheric alt-rock, art-rock, and even minimal techno.

The band, consisting of lead vocalist and lead guitarist Yannis Philippakis, drummer Jack Bevan, rhythm guitarist Jimmy Smith, keyboardist Edwin Congreave and formerly of bassist Walter Gervers, started out at Oxford in 2005. They had a relatively rapid rise, signing onto Transgressive Records, releasing a bunch of singles and started working on their debut album with TV On The Radio’s David Sitek. They later decided to mix the album themselves, abandoning the earlier mix. The result is an album brimming with energy, excitement and tons of enjoyable hooks.

Antidotes opens with a slow crescendo of horns before powering into the opening track, ‘The French Open’. The song, coupled with shrieky and heavily accented French lyrics sets up a platform for something even more energetic. That comes in the next song itself, ‘Cassius’, with Philippakis’ and Smith’s jangly, angular and asynchronous guitars and Bevan’s excellent drumming. There is a certain Talking Head vibes in the rhythm patterns in the song while bringing an undeniable forcefulness energy.

Even then Foals had shown the ability to write arena rockers at that early stage. ‘Red Socks Pugie’, a 5-minute epic, with atmospheric synths and euphoric guitars running throughout the songs showcased the very same ability. It is the same case as in ‘Olympic Airways’, settling into a similar groove before exploding into a noisy and a cacophonic ending. These tracks ensured that Foals were in heavy rotation in alternative radio playlists throughout 2008.

Between the excitement, there are moments of melancholy in the records with tracks like techno-infused ‘Electric Bloom’, ‘Heavy Water’ and ‘Big Big Love (Fig. 2)’. The songs usually ended with weird yet enjoyable jams. The perfect representation of the album could very well be its lead single ‘Balloons’. Catchy hooks, catchy guitar riffs, catchy and fun horns and rhythms, it encapsulates the spirit of the record really well.

Perhaps the most eccentric moment on the record would be ‘Two Steps, Twice’, with its erratic pace in the beginning with guitars and drums in syncopation before transforming into a more anthemic piece, with its “Babada babada” filling the rest. Live, the song usually expands to more than eight minutes in length, giving Philippakis an opportunity to crowd surf. The album ends with the instrumental ‘Like Swimming’ and the glitchy and electronic ‘Tron’.

Antidotes paces itself excellently, and never lets the foot off the pedal throughout the album. There is a certain youthfulness and exhilaration in these tracks, while also being musically interesting with unusual time signatures, angular and catchy riffs, pulsating basslines, and rhythmic drumming. Although there were some elements of math-rock in it, the album itself was misclassified as being a math-rock record.

Although, Antidotes was not as ground breaking as it was made out be at that time, it proved to be an important transitional point in the UK indie rock scene. It provided a bridge of sorts, from Bloc Party and Franz Ferdinand to the artful and ambitious guitar-led music of Everything Everything, Alt-J and others.