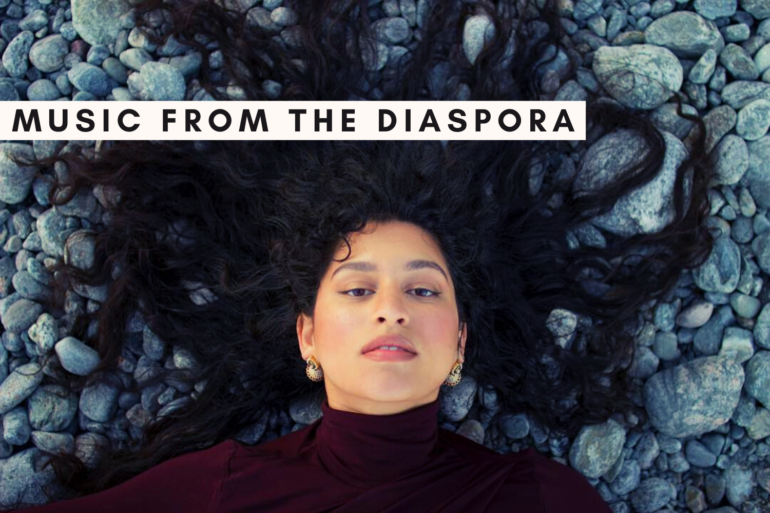 Music from the Diaspora will focus on South Asian expatriates – weaving their ethnographic identities into their music. For our very first issue, we spoke to Sweden-based left-of-field singer/songwriter/producer Nadia Nair on navigating myriad roles, choices and perceptions as an artist of colour.

Transcending labels and music award categories like ‘world music’, Stockholm-based Nadia Nair has built an eclectic oeuvre over the past decade, without the slightest hint of wanting to find a definitive sound. Her art is an extension of her being, and as a woman of Swedish, Malaysian and Indian descent, Nadia is acutely aware of how an artist of colour is typically viewed through the music industry’s white lens. In past interviews, she has notably called out the dichotomy between the industry’s quest for innovation, and resistance to open the floor up for brown women – calling it the panic-when-they-can’t-fit-you-into-a-box stereotype.

While many artists consciously move away from their roots, Nadia’s always worn hers on her sleeve. Her videos, for one, are replete with shape-defying statement pieces and ethnic sartorial choices ranging from brocade, bangles, mehndi, haath phool and jhumkas. Her music is sustained by spacious beats as well as tropical riffs; they glide from accessible to left-field in a matter of seconds, with sumptuous influences of pop, electronic, soul and R&B.

Her debut album Beautiful Poetry, released in 2016 to rave reviews, drew immediate comparisons with M.I.A, Lykke Li, Solange, Little Dragon, and FKA Twigs. Nadia cites them and others – Erykah Badu, Queen, and Jimi Hendrix – as having influenced her music.

“My voice is my genre”

As an homage to her independent spirit, Nadia founded Naboobia Records in 2016, naming it after her old artist persona to remind herself how she started out, who she was back then, what came with it. “I was stubborn and naive. It was beautiful. But you change and so do your goals.”

Becoming an artist came with a lot of unpacking and unlearning for Nadia. As a child, she recalls being frowned upon for being slow, but eventually, she came to respect that child’s pace. That, in fact, helped her reconnect to her true nature. She also reflects back to her youthful obsession with being remembered. Now, making music is about accepting a humbling, safe and sustainable space in a society that promotes growth.

“Some things take time and some things will be spoken when they want to be heard. That way, there is holiness and respect for what I create when I create,” she says. “I want to spend time on my family, my home, which I’ve neglected chasing short highs in the past. I used to think I had to deny myself basic human needs to get here, but now I ask myself ‘what is the price I want to pay’.”

Thematic overtures to the self

If not a musician, Nadia would be a poet. “Or a pot-stirrer, if there ever was a society that needed one. I’d cook and feed people,” she says. Food, like music, nurtures the body and soul but in a different way, according to her, which is why she regards artists as shamans, or messengers between worlds that are difficult to touch outside of artistry.

Speaking of the multifacetedness of her work, Nadia’s videos are an outworking of her artistic persona, and an integral aspect of her art. The idea for a video comes to her at the same time as the track itself. “Sometimes when I hit a snag, I play a music video, mute the sound and play my music on it. It helps me understand my own process too,” she confesses.

When asked if spaces we inhabit shape our art, she replies saying, “I think my inner world shapes my visuals more than anything. The world outside was never enough; I’ve always romanticized escapism growing up. But there is a harshness here [Sweden], a saltiness in the air – so maybe I am more influenced by the outside world than I know.”

Growing up in Gothenburg, a fishing district in suburban Sweden, may have something to do with the dream-like quality in her music and accompanying videos. Having travelled extensively also helped Nadia bring her inner journey to life. In fact, she began performing at a very young age for strangers – on flights to and from her mother’s homeland – an annual pilgrimage. It’s hard for her to be in one place for a long time, she muses, but she is slowly learning to root herself a little bit more.

There is a lot of heartbreak in Nadia’s songs, but also an antidote for it in valuing the self and its vulnerabilities. “The older I get, the more I find it easier to prioritize happiness,” she says, sharing why she loves performing ‘Nature’s Child’ from her debut album at concerts even today. “It’s about shedding old skin but still being recognizable. It feels relatable at all times,” she says.

Nadia, whose art was born on the stage, reflects how the community culture of bringing people around music, food and performance is fading. Some of her best experiences performing live were moments that allowed her to connect with strangers. “I was on a lot of underground scenes in Gothenburg when I started out, many of which shut down due to lack of funding. Later, I ventured west to the UK,” she says.

Getting from point A to point B

Nadia takes full responsibility for eschewing all labels. Unable to fit her work into any singular box, she says, “I think my voice has become my genre.” She isn’t very keen on setting limitations for herself either, believing that the world has enough of that censorship already. It is important for her to be unapologetic about her creative decisions, to speak and more freely when she creates. “That means stepping outside of people’s expectations of me and away from labels. What I create comes from a world of conscious decisions that I do not always control,” she adds. “Some things are just out of your control and others that are within the realm of free will. I think age teaches you the difference and to accept it.”

She met Victor Rådström (producer of 2013’s Bon Voyage EP) when they were both young artists dabbling in music. Learning to trust each other’s intuitions, they began to experiment and break rules. The release of one of Nadia’s earliest singles ‘Monika the Brave’ was followed by harsh criticism including comments that she was essentially making “Bollywood music with a white touch”.

“Today there’s a lot more help to get in starting your own label and doing your thing. So if I started out now, maybe I would have done things differently…and so I would have sounded different,” she says in retrospect. As painful as it was starting out under these circumstances, Nadia takes pride in all the songs she’s ever made, even if they no longer sound like her. The experience certainly paved the way for her decision to go it alone and set up Naboobia.

With Beautiful Poetry, which was two years in the making, she encountered a different set of problems. Nadia shares it was hard staying motivated; moreover, with her self-financing the project and managing things without the big label muscle, it was impossible to solely focus on the music itself. “When you do it on your own, it’s easy to feel like you’re on your own,” she says, especially with sceptics around to voice their doubts.

Songwriting does not have to be a lonely process

In the end, she came through – finding a steady collaborator in Johan Jonasson (guitarist and producer on Beautiful Poetry), taking up part-time jobs, overcoming her performance anxiety, always falling back on her biggest support system – her family.

That is why she wants to collaborate more on her own projects, even mulling over the idea to put together a collective with Jeff Bhasker, FKA Twigs and Kindness. “When I write for other artists, it’s different. I know how to respect their space and solitude because I know how important it is,” she says while acknowledging how easy it is to get consumed in your own loneliness when you write. Songwriting, for her, is a deeply vulnerable, personal process, and it depends on people in the room clicking. With rapper Mwuana, and Adam Bainbridge aka Kindness, it was just that.

It’s been 3 years since the release of Beautiful Poetry. “Today music is like any other commodity – you listen to a song and then you forget it and want to move on to the next one,” Nadia rues. All the projects she’s put out since 2016 have their own dense visual stories; they are their own bodies of work, each one a personal essay that grew over time.

Presently, she is travelling and collecting fragments for her future projects. Sharing a hint as to the direction of her new music, she expressed her ongoing fascination with dancehall and afro-beat music. If all goes according to plan, 2020 may see the release of a collection replete with dance and choreography like ‘Forever’. But you wouldn’t want to hold your breath because Nadia Nair’s an enigmatic forcefield and all about eluding expectations.

Her message for sceptics? “I love and I break as a woman, as a daughter, as a lover and as a coloured person. All I want is to write about it honestly.”