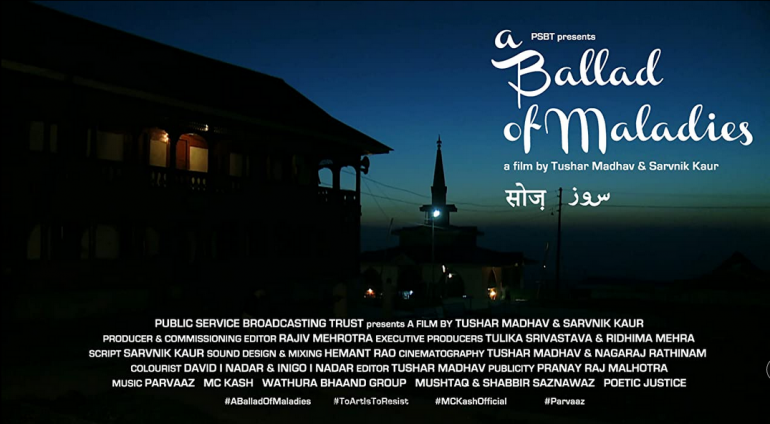 There’s a particularly powerful and chilling part in the 2016 documentary Soz: A Ballad of Maladies that stands out. It’s when Roushan Illahi aka MC Kash says, “The Jehlum is beautiful, it’s so beautiful I could write poems about it. But do you know how many body bags were fished out of the Jehlum?”

While Soz primarily explores the expression of dissent in Kashmir through art, music, writings, comics and more, in the process it also ends up being a history lesson. Tushar Madhav and Sarvnik Kaur’s National Award-winning documentary film leaves the viewer with a historical perspective and better understanding of a complex subject like Kashmir.

It is interesting to note that the journey of making the film started with Madhav wanting to highlight Dying Breed. The band didn’t feature in the film and have seemingly disbanded.

“Having never visited the region before in my life, my initial inquiry in Kashmir did start with music. It began with a Kashmiri blues band – whose music I had heard on Youtube and read about them in a New Delhi newspaper. I was quite simply inspired by the young band and their music that had fused Kashmiri poetry with blues. The inquiry was seedful, though, as it opened us up to an entire tradition of resistance through music and art in the region,” says Madhav

“The more time we spent with the people, in the region, the scope of the contemporary art practices kept widening from music to poetry to performance and visual arts. The aim truly was to discover a narrative, which was eventually found and put together on the edit table,” he adds.

MC Kash came into prominence in 2010 with the song ‘I Protest’. The track is about the demonstrations where thousands of Kashmiris took to the streets in what were supposed to be peaceful protests but ended up with more than 100 protestors including several teenagers killed in police and paramilitary action. The powerful song begins with news clips from the violence and ends with the artist listing the names of the people who had died. At the time, he released the song on Reverbnation. Soon enough, multiple fan-made videos that used raw protest footage were uploaded on the internet. One of them reportedly crossed 100,000 views before it was pulled down from YouTube. The studio where the song was recorded was raided by the police.

“It took almost five trips to meet him, only after we were vouched for by his network of friends. He has to be careful, I don’t blame him for being careful. Young boys get picked up all the time, and young boys with a voice and a great fan following would be target number one,” shares Sarvnik Kaur.

In the film, MC Kash talks about choosing hip-hop because he could relate with the art form over the aspect of slavery and oppression, why all his songs are about conflict, and more.

The filmmakers capture the fire in MC Kash’s words, his frustration, and his politics. In comparsion, Khalid Ahamed and Mir Kashif Iqbal, childhood friends from Srinagar and founders of Bengaluru-based Kashmiri rock band Parvaaz come across as almost impassive. At one point they concur that they’ve learned that everyone is entitled to their opinion.

According to Madhav, while the specifics of Parvaaz and MC Kash’s outlooks might vary, a certain sentiment runs across Kashmiris that is fairly common. He adds, “Parvaaz and MC Kash make two different kinds of music. In fact, MC Kash says he does not even consider himself a musician. For him, his poetry is more crucial than his melody. Parvaaz is melodic and poignant. MC Kash brings Kashmiri history into his music. Parvaaz brings Kashmiri poetry. Parvaaz is based in Bangalore. MC Kash is in Srinagar. I think these largely draw out the kind of energies and conversations they individually bring.”

For Kaur, keeping their reluctance to express their political opinion in the film was a conscious decision, with the intention that it should make us, as viewers, as Indians think.

She explains, “These two people (Kashif and Khalid) are keeping the Kashmiri language alive in the mainstream. They’re doing a huge thing. People don’t know what the lyrics mean, but they’re singing anyway. They’re learning a language phonetically, they’re being introduced to a new cultural fray. But the same people that would go in front of thousands and belt out song after song about Kashmir, about missing mothers, their own forms of memory, lullabies would be so reluctant to talk about it in front of the camera.”

According to her, in this action of not trying to convince others to sympathise where their experience and reluctance was coming from, she saw ‘fatigue’ as a filmmaker. They were happy to facilitate the filmmakers with their music, but didn’t “want to add any other voice to whatever case” was being made in the documentary.

“I suppose it was very evident that they wanted the craft to do all the talking. They didn’t want to indulge us and that was the biggest favour they can do. They were treating us as equals,” she opines.

It is easy to get overwhelmed with a complex subject like Kashmir. Fake news, misinformation and political propaganda are easily fed to people courtesy cheap smartphones and cheaper internet data packs. It is easy to be misled by “alternative facts”, claims and counterclaims. But even with the right information, facts don’t change our minds and according to psychologist Steven Pinkler, “People are embraced or condemned according to their beliefs, so one function of the mind may be to hold beliefs that bring the belief-holder the greatest number of allies, protectors, or disciples, rather than beliefs that are most likely to be true”.

It is not unusual to see people double down on their current position rather than publicly admitting to being wrong or of holding a new perspective, even when presented with strong arguments and solid facts. According to Neil deGrasse Tyson, “Persuasion isn’t always ‘here are the facts, you’re either an idiot or you’re not’. It’s ‘here are the facts and here is a sensitivity to your state of mind’. And it’s the facts plus the sensitivity (that) when convolved together creates impact.”

Soz doesn’t rely on facts alone to offer a historical perspective and a more nuanced understanding of the region. This is because of the medium the filmmakers have chosen – it’s the artists and the art, the poetry and the music.

“We didn’t want the film to be educational,” concludes Kaur. “The idea is to insidiously get behind the barriers and bring them down and music does that. Music lulls you into a space where you’re emotionally open to receiving an input.”