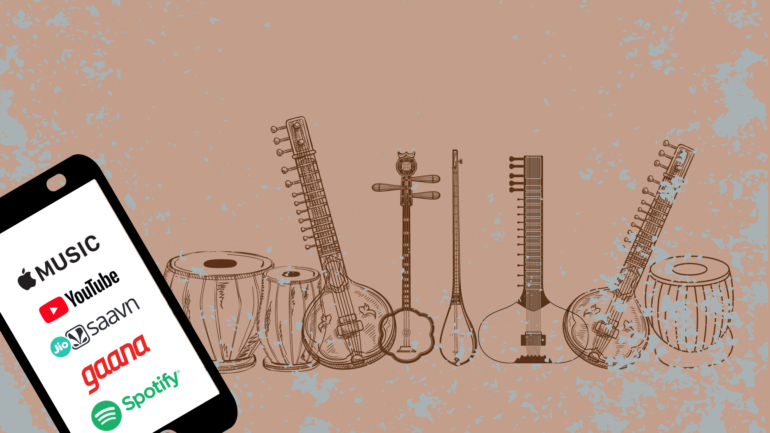 Discovering Indian Classical music in the age of streaming

Till a few years ago, online streaming remained an unfamiliar territory for many Indian classical musicians. The platforms too were yet to disrupt the major player in the market, YouTube, which offered free concerts, videos and studio-recorded material. Insync remained the favourite for those who liked to consume their classical music via television.

The growth of streaming platforms opened an opportunity to showcase their audio recordings via a new medium. Today, though an artist’s music would be available on the streaming platforms, it’s up to the listener to try and discover their repertoire.

Let’s take Hindustani classical vocalist Kaushiki Chakraborty, for instance. A well-known artist like her would rank very high on search engine results, even if a user enters a rudimentary search term like ‘Hindustani music’. In the case of lesser-known musicians, the listener should be aware of them or discover them by default, through playlists or recommendations.

What’s happening today is that the streaming platforms have plenty of Indian classical tracks, but it’s left to the listener to discover them. This is the case with both Hindustani and Carnatic forms, vocal or instrumental, and even fusion music. However, the platforms are taking steps to increase the number of listeners for this genre, whether it’s Apple Music, Gaana, Spotify, JioSaavn, Amazon, Hungama or Wynk.

A spokesperson for Spotify India says their focus has been to cater to listeners in the most engaging way. He says, “Our intent is to dive deeper into sub-genres. We are already curating for thumris, dadra and khayal. We’ll also go deeper into segregation for instrumental music across the bansuri, sitar, sarod, tabla, etc, and into vocals and Gharana styles. A similar approach is being planned for Carnatic music.” To attract new listeners, platforms also put out many fusion albums.

Classical music has been on JioSaavn’s curation radar too. Neetu Puri, the platform’s associate vice-president of programming, says, “This genre could be overwhelming for listeners who are not familiar with it. As a part of our deep curation, we try and make raag-based playlists which are easy to consume. For the monsoons, we have a playlist called Megh Malhar, and for evenings, we have Sunset Raga. These playlists definitely increase the interest in classical music among the users.”

The type and order of playlists usually attract the listener. Spotify, for instance, says its playlists are experiential, and not just a list of tracks. “Like all our other features, playlists are designed keeping the listener at the centre of our curation process, while also enabling artist discovery, engagement and love,” says the spokesperson. The playlists could thus be created by the staff, based on algorithms or prepared by users, either individually or collaboratively.

Most platforms are aware that classical music has a smaller audience in comparison to Bollywood or popular independent music. Yet, the listeners are a dedicated lot, and always welcome rare recordings.

Chandra Sekhar T.V., who streams both Hindustani and Carnatic music regularly, says, “Streaming gives one the flexibility of exploring similar content across different artists. For instance, I have been hooked to the Carnatic instrument nadhaswaram of late and a raag, such as Sahana, that is best suited for the instrument. Streaming gives me the advantage of looking for yesteryears artists and their explorations of the raag.”

Sarod exponent Abhishek Borkar points out that though streaming platforms give one a good choice, a lot of content is already available free on YouTube. He adds, “I guess streaming platforms help one expand one’s fan base. Most classical audiences are used to live concerts. More youngsters are into streaming and one can reach out to them. However, most artists tend to promote their music through Facebook, Instagram or WhatsApp, instead of actively using streaming platforms.” He further asks, “YouTube is available by default on my system. Why should I subscribe to a streaming platform?”

Similarly, listener T. Narasimhnan says he found similar content for Carnatic vocalist Abhishek Raghuram on both Spotify and Apple Music. “All of them should aim to give different options for the listener,” he feels. Chandra Sekhar says that whenever he discovers a musician or sub-genre for the first time, he searches them on YouTube to find their live performances. “It happened with Hindustani vocalists M. Venkatesh Kumar and Kedar Bodas, and with the Marathi spiritual form of abhangs.,” he says.

Another question commonly raised is whether classical pieces should be shortened on streaming platforms. At a recent Global Community of Indian Musicians webinar on ‘Opportunities for Classical Musicians in the Digital Space’, violinist Ratish Tagde pointed out that many classical compositions are lengthy. In the subsequent discussion, the panellists said that while shorter pieces may attract new listeners, the more traditional audiences would prefer compositions in their entirety.

Puri of JioSaavn says that following the lockdown, one has noticed a change in streaming habits. “There is a tendency to listen to music that lends nostalgia, and that includes Hindustani and Carnatic music. Audio streaming is also non-invasive. You could be listening to a playlist or track, and don’t need to be actively involved with the app,” she says.

During the lockdown, however, many listeners are also spending time watching online concerts on Zoom, Facebook Live and Instagram. Borkar, who organised the Artists United series of home concerts, says his shows attracted a dedicated set of listeners. “Though I don’t have figures to prove it, I am sure they wouldn’t be streaming any music on, say, Gaana or Spotify while watching such shows,” he says.

The challenge thus is to help listeners discover newer acts and lesser-known artists. In the current scenario, many are finding out about new artists on their own or through recommendations. A good starting point would be for platforms to include such artists in their playlists, or to include more recommendations on their home pages. Right now, everyone seems to have a large library, with little guidance on how to browse.