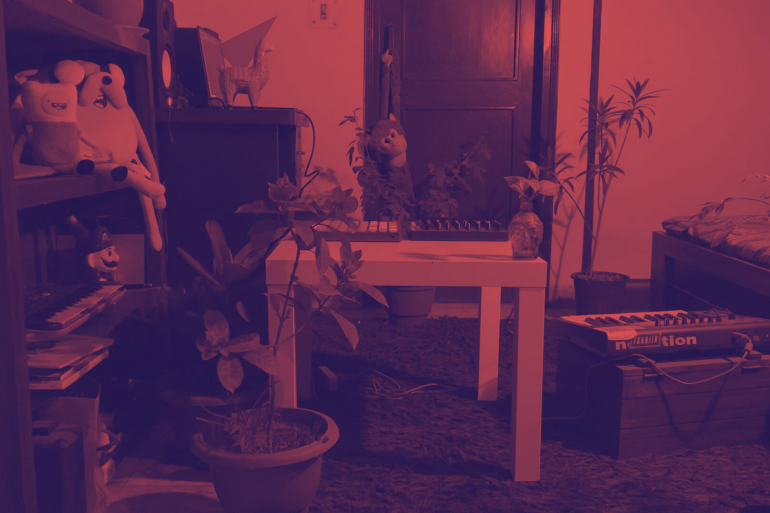 Last summer, VICE’s Tir Dhondy made a cool video about her cyber nightlife experiences attending VR raves, Zoom parties and video game ragers in the first few months of the COVID-19 pandemic. “I don’t like crowds so this works for me,” one attendee tells her from a breakout room at a COVID ROOM party. Another complains of Zoom fatigue. I hear you both.

To say 2020 has been a historically bad year for live events will be an understatement. With live music venues, galleries and theatres in India shut throughout the majority of last year, filmmakers turned to streaming platforms, writers traded ideas on Substack, dancers conducted workshops on Zoom, and musicians made their bedrooms Gram-ready. How else do you create the buzz for a new record and monetise fandom in the middle of a raging pandemic?

While artists were ditching traditional modes of showcasing art and adapting to new ones, the entire ecosystem of consumers, curators, the media and the tech industry were playing a role in this recalibration.

Since April, the independent music scene has been constantly pushing their luck and the boundaries of performance with virtual concerts, perhaps to some success for the first time. Over the gloom-ridden months that followed, the scene’s instigators offered up a series of ticketed live streams, radio broadcasts and virtual raves, a few of which we’ve re-reviewed below!

For its first online live event, Pagal Haina paired up with audio-only streaming portal Gramrphone to bring intimate performances by Shashwat Bulusu, Rounak Maiti, Begum, and Hashbass. The stream got about a hundred attendees and most of those who turned up did so out of curiosity and in support for their friends. The chat forum made up for the lack of a visual element, and enabled listeners to communicate. Overall, it was a very mellow, make-the-best-of-it midsummer atmosphere. The energy was nothing like the last Rounak Maiti set I had physically attended (in Delhi, late-2019). Instead, it felt quite close to our own Discord server “The Scene.” Hashbass on Air went on to become a monthly broadcast on Gramrphone, now fully catalogued on Mixcloud.

In essence, the Gramrphone gig was very similar to Boxout.fm’s day-long broadcast, Indie As Fuck, on Independence Day, featuring a stellar line-up of Disco Puppet, Lifafa, Komorebi, Pardafash, Rounak Maiti, Kumail, Sandunes, Kavya Trehan and others. In fact, the online radio station, despite having to downsize due to the pandemic, has played a critical role in making up for the lack of live concerts, with their frequent sets and shows by guest artists and DJs from across the world.

Off the top of my head, there was the ‘Chalo’ showcase to mark its launch in November, which saw many artists from the South Asian collective play from remote locations on DJ MoCity’s evening show. I still remember Pakistani producer Talal Qureshi pulling up a fire track by Faris Shafi towards the end of his set. My friend who often listens to music with me over FaceTime didn’t recognize it either at the time. So I texted a music producer friend if he knew what song it was, and for a moment, it felt like leaning over to a friend during a live set in a club, insisting they send me the song’s link later!

The race to simulate immersive experiences

Speaking of clubs, let’s talk about Club Matryoshka. Finding Oceantied on the lineup for Infinite Summer festival, I went down a rabbit hole only to find myself at a virtual beachside club modelled after Minecraft. Ketan Bahirat later told Vice that it didn’t feel close to the real thing and took months to get used to, but it was “great because it pushes the boundaries.”

Like Club Matryoshka which predates COVID-19, video games like Fortnite and  Second Life, and platforms like Twitch and Discord have been an Algorave staple for the longest time. But last year, they became popular mediums to simulate immersive live music experiences and found use in innovative ways.

In July, events like UNRATED and Nucleya’s retroFUTURE brought the fantasies of digital virtual reality raves to mainstream electronic music. Streaming on Twitch and YouTube, Transhuman Collective’s UNRATED spanned over two days with a lineup featuring Zokhuma, Ash Roy, Nate08 and OX7GEN among others. I had just shifted into a new apartment and had a few folks over that weekend. I like replaying that evening in my head—walking in and out of rooms and shifting furniture, with the concert blasting on my house speaker system. The energy definitely helped!

While tech was one way to go about it, the folks over at Madness Jams focused on other aspects of a live gig—hospitality and merchandise. “We decided, since you can’t come to us, what if we bring the all round experience to you,” they announced on social media, snail-mailing food and beverages if you purchased a ticket for aswekeepsearching, When Chai met Toast or Bawari Basanti’s show. Bacardi NH7 Weekender did something similar in December, but despite announcing a star-studded lineup, the pre-recorded “jam sessions” fell flat for many viewers. That said, the marked-down passes were a steal, considering you got a stripped-down Lifafa “set” from Goa.

Rounding off the year in live music for me was a 28-hour TidalCycles’ Solstice Marathon in December, organised by Algorave founder Alex McLean. 84 artists from across the world performed everything from glitch and techno to algo-pop and algo-swing. There were laptop bands too and even a computer generating code by itself! I had come for Abhinay Khoparzi’s set and stayed for the fascinating visuals, hemispheric diversity and lively chat on the Eulerroom server, making a mental note: These people take partying seriously.

Where do we go from here: Political partying or rave dystopias?

With live music slowly rearing its head again, we are going to be confronting a new set of realities this year. At least until mass-inoculation is achieved and clubs are back to hosting at full occupancy. Some promoters are sticking only to open air concerts and carefully mapped arenas, while dance venues around the world are toying with the idea of large bubbles, space suits, pods and Micrashells for the safety of club-goers!

As we await such decisively dystopian futures, I’d like to shout out to London-based DJ-tastemaker Jyoty Singh for keeping it real on her Twitch channel. Not only has her content, style and aesthetic kept me grounded and entertained these past couple months, Club Jyotiana recently also raised funds and awareness around the farmers’ protests happening in Delhi right now. AWKS’ Uddipan Samrah, journalist Dhruva Balram and rapper Jitwam Singh are among some other instigators who have led similar campaigns around climate issues, mental health, COVID relief, Dalit and minority rights during the pandemic, many of which culminated in virtual shows, fundraisers and pledges. On many occasions, it has translated to social action on the ground.

Dubbed as the year of great cultural depression of our generation, 2020 has nonetheless transferred the social functions of live music to online spaces. There are clear signs that concert-goers are willing to engage with new formats of live music, at least in the short-run. Only time will tell if some of these trends would survive past the carry over to the post-pandemic era.