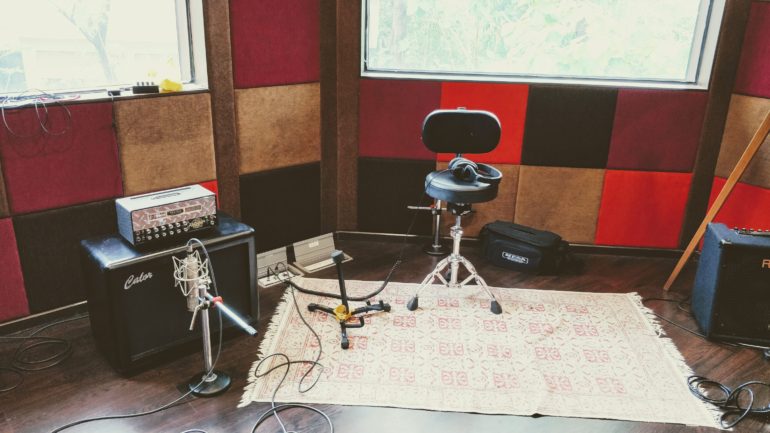 At Compass Box Studio, money was never a barrier to entry for talent

ahummingheart·
Long Reads
·July 24, 2020
Recording music has always been an expensive business. Many Indian independent artists still hold a day job, citing the unreliability of income and the huge costs associated with recording a new song, EP, or an album. The entry-point to this business is still reliant on having expendable money without which, seeing the inside of a recording studio would be impossible.
That is, until now. Enter Compass Box Studio.
The Ahmedabad-based recording space has an aim to make music recording an accessible feature to everyone in all walks of life. Offering one free recording to budding musicians, the studio’s objective is for people to take up music and collapse the barrier of entry that would otherwise have deterred them.
But when its founder Raag Sethi opened this studio two years ago, he had no idea how to mix or record music and had no formal background in audio engineering. In fact, he hadn’t done so much as to have visited a recording studio before embarking on building his own.
“Initially, the idea was to create a space where some friends and I can come together, and be passively entertained,” Sethi told AHH over a phone conversation. “I only knew how to set up the mic properly,” he said, talking about his prior experience as an engineer from when he was at Chapman University.

We’re all musicians first, and everything else comes after that.

Creating the studio from scratch was a formidable task, but it didn’t deter the 29-year old. He learnt the basics through research, both online and contacting people he knew in the industry. “Things like cabling the electricity wires, the control room, live room- all of those were new things,” Sethi said.
Sethi’s fully-equipped studio offers a variety of depending on whether the artist wants to record a single, an EP or an album.  “We’re very passionate about doing something right, and not worrying about if it’s going overtime or overboard,” he said.
Sethi often works with the artists on their budgets; recording with artists that may not have the financial capability of going to studios in Bombay, Delhi, or any other metro. “We’re all musicians first, and everything else comes after that,” he muses.
Most studios moonlight as recording spaces for dubbing, voiceovers, radio spots, and other commercial audio work. In fact, Sethi said that studios never rely on recording music for their income. “These are the things that pay the bills, because there’s not enough demand for large-scale artists recording throughout the year, keeping the space busy,” he said.
Bucking the trend, Sethi wants to make Compass Box Studio centred around producing independent music exclusively. “I’m not interested in movies, I’m not interested in voiceover work; the only thing this space is to be used for is to make albums,” Sethi affirms.
But devoting his studio to only produce albums has resulted in some realisations for Sethi. The studio is located in Ahmedabad. Sethi quickly realised that since the city isn’t a burgeoning indie hotspot, he had a lot of downtime on his hands.
“In Bombay or Delhi, you could probably get by and have a lot of work coming from singer-songwriters and bands who want to record their debut EP or album or single,” said Sethi.

This gave him the idea to start live recordings from the studio, and release them on Youtube. All songs are recorded in a single take, and no backing tracks or overdubs are allowed. Started a year ago, Sethi cites NPR’s Tinydesk concerts and Audiotree’s live recordings as inspirations behind the initiative. “I wanted to, sort of, emulate that but only for original innovative music,” he said.
Having previously worked with Aditi Ramesh and Hanita Bhambri, the studio has also opened its doors for artists that had not previously been to one- much like Sethi himself. To celebrate the first anniversary of the live sessions, they released a compilation album, making it the first compilation of live independent music in India.
Currently, Sethi’s main objective is to get the word out about his live sessions. In doing so, he also hopes to get a sponsor, since all expenses are met out of his own pocket. Without having to worry too much about finances, Sethi can fully devote his time to discovering artists, and fulfilling their dream of recording in a proper studio.
“We want more people to apply. We want to hear more people, we want to hear different languages. And we want to make good music. At the end of the day, it’s as simple as that for us,” he said.
However, an artist can’t just walk into the studio, expecting their one free recording. Compass Box has a Google form that prospective applicants have to fill, accompanied by a sample recording of their work. Although the language is not a barrier, there haven’t been any songs in regional languages so far, entries were limited to only Hindi and English. Recording that one track opens many avenues for the artists- least, not those that lead to performance venues.
Currently, Compass Box Studio runs pretty much like a record label of yesterday, producing music, and helping artists release their work at a one-stop-shop. “We produce it, we record it, we help them release it, and help them market it,” said Sethi.
However, by his own admission, Sethi has not yet grasped how the latter works just yet. “The one thing that I don’t understand about the music-making part is when I actually have to release it- which editors do I have to send it to, how do I get it on playlists,” he admits. This led to a conversation with OK Listen’s founder Vijay Basrur, who is now the studio’s distribution partner. This relationship escalated to a quest to find a singer-songwriter that both could call their own, and ultimately culminated in a contest. The winner gets to record a session at the studio, and get their music distributed by OK Listen on all major streaming platforms.
Along with Sethi and Basrur, Nikhil D’Souza and Maalvika Manoj will also be judging the entries for the competition. Again no language barriers exist, although the only rule is that it has to be a bare-bones recording, without any additional processing or production.
“We want to get a sense of the songwriting capability and the body composition,” he said, with the final mastering and polishing left up to the studio. Two winners will get their free studio time and some home recording goodies, while the rest of the top ten applicants will get discount coupons.
The deadline for applications is July 31, and Sethi hoped for the winners to make it to his studio by the end of August. However, with COVID-19 statistics perpetually trending upwards, he remains flexible on the final recording date.
The pandemic has also shaken the Indian independent music scene. With no live performances, artists are delaying releases and failing to keep up with their recording dates. But Sethi has been seeing more work now than before. In the past two weeks, two people have reached out to him to produce their singles. “They’re all coming from the same space- they are working from home, so they have some more free time, and so, they make music,” Sethi said.
Sethi’s work has already started paying dividends. A single he produced for Meera Desai named ‘Homes’ was nominated for the best pop production music track by the Production Music Awards in London, which was part of only the second EP Sethi ever produced.
Sethi wants to continue challenging himself, by producing music in various other genres. Coming up next is a hip-hop track, some pop tunes, and a jazz album. But his focus also remains on spreading the word about Compass Box’s live studio sessions and building on the excellent feedback that he always receives upon every release on the Youtube channel. Sethi also credits a team of 5 to 7 people who help the studio to function smoothly. Among them are violnist Protyay Chaktraborty and vocalist Meera Desai, who help with mixing and artist coordination respecitvely.
From the man that had not set a foot inside a studio to producing tracks that garner international acclaim, both Sethi and his studio have come a long way. However, he dare not call himself a stalwart of the industry just yet. “I’ve only been in the music circuit for the last, maybe two or three years; I wouldn’t be one of those people that you call a veteran,” clarifies Sethi. If this is how a novice produces music, fans of the Indian independent scene should be thrilled to watch him blossom his experience and repertoire; all while giving artists their time and space to exhibit their raw talent, without having to worry about the finances.