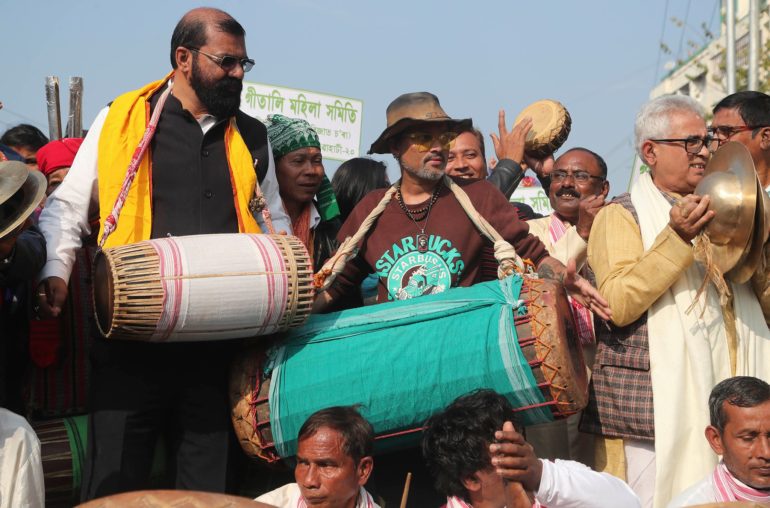 When Dr Bhupen Hazarika sang the song ‘Biswa Bijoyee Na-Jowan’ (youngsters who won the world) in the 1939 film Indramalati, he probably would not have thought that the youth of Assam would resonate with the same song as they lead the protest against the Citizen Amendment Act, some 80 years later.

It is important to go back to the days of Assam Agitation (1979-85) to see the importance of music as a form of protest is the state, to see how Hazarika’s work has managed to strike a chord amongst the Assamese nationalists.

Hazarika’s songs united a frustrated Assamese diaspora and reflected the helplessness faced by the state since 1947. Assam’s troubled relationship with New Delhi found a rich and resounding depiction in his lyrics and songs.

The 1983 Assam elections were brutal. At the peak of the agitation, Dr Hazarika wrote a ballad which described a “little brother” who was killed. The song, ‘Juye Pura Tirasir’ was dedicated to a young martyr, and its lyrics translated to: “My little brother disappeared that year. Do you have any news about him? He wanted to build his country and to secure a happy future for those who live in Assam. He did not want to become a stranger in his own land.”

Today, the fight remains the same. The Assamese do not want to become strangers in their own land. So, when 17-year-old Sam Stafford and 20-year-old Dipanjal Das lost their lives due to the brutal open firing by police during the anti-CAA protests in Guwahati; what Dr Bhupen Hazarika wrote about came rushing back.

Protest songs have a very deep-rooted hold within the Assamese society. Even before the current anti-CAA protest intensified, there was a trend which showed the mobilisation of the Assamese youth towards fighting the age-old issue of illegal immigration and the negligence from the Central Government through music. The anti-CAA protests established music as one of the foremost weapons for this generation to show dissent. New-age and independent artists populate the domain of protest music in Assam currently.

Hip-hop has become the voice of the youth and is actively used today as a means to express opinions. In 2018, Guwahati-based rapper Minimi released his composition titled ‘Bangladeshi’. The song talks about the Assamese fighting for their rights and how they feel betrayed by the government and its system. The song has the feel of a war cry asking the youth to join this fight and save the land from the infiltration of the illegal immigrants.

The track, however, has garnered criticism for being overtly xenophobic. The lyrics can be considered inflammatory and be interpreted as a catalyst for inciting violence. A part of the song translates to: “Foreigners maybe brought and filled up in Assam. If we pick up our hengdang (sword), the Bangladeshi will run lifting their legs, leaving their lungi.” Another part translates to, “The guest is godlike for us. But beat-up the foreigner repeatedly. We will cut them into half if the question arises of the existence of motherland. Every house has a sword. It is sharp. Whoever dares to die, come out, you brave Asomiyas, Let us make the Luit red.”

The shift in tone and themes between the songs Hazarika composed, and what is being rendered today indicates the mindset which has set in within the Assamese society. The current wave of protest in Assam saw the use of the slogan, “Aah Aah Ulai Aah”. It calls everyone to come out and join the movement. This slogan also originates from a Bhupen Hazarika song with the same name.

While Bhupen Hazarika’s songs are a call to sacrifice, Minimi’s track is a call to arms. Also, notably, Hazarika’s song had the phrase, “Xogaj Jonota” which translates to “well-informed public”. At a time, when the nation is battling misinformation, an age-old song showcases its timelessness yet again.

Another young singer from the state, Shankuraj Knowar collaborated with a few upcoming musicians to compose a song called ‘Odhikaar’. The song was released on December 10, 2019, at the peak of the anti-CAA protests in Assam with a statement which read:

“The Assamese speaking population feels they will be outnumbered within their own state by the Citizenship Amendment Bill, 2019, (CAB), due to the threat and pattern of illegal Bangladeshi immigrants…At the macro level, the whole of India will not suffer what Assam will suffer in micro-levels…All protests should be in the spirit of the constitution of India by peaceful means and by respecting everyone else’s views. Violence and atrocities of any kind should be avoided. However, we stand here to stand against the implementation of the CAB in its current way. The state has to be protected like you would protect your homes and then welcome guests.”

‘Odhikaar’ is a beautiful composition which criticizes the state government for sacrificing the interest of their land for those of the central government. The song reminds everyone of the sacrifices made by the martyrs and asks everyone to come out and oppose what is wrong. The themes here are similar to the ones composed by Hazarika. The tone is calm, yet it evokes the spirit of Assamese nationalism. It doesn’t call for aggression but requests people to fight for what is right by being well informed.

Rahul Rajkhowa has written an English rap highlighting the atrocities of the government and the impact of the decisions made by those in power. In one of his earlier compositions, Rajkhowa has also sung about the vulnerability of ‘immigrants’ being perceived as the ones responsible for a spectrum of Assam’s problems that range from economy to ecology. That song garnered some criticism for it giving impetus to discrimination and marginalisation.

Along with them, there are other upcoming, independent artists composing music who are contributing to the movement. Their composition, delivery and lyrics are indicative of the influence of the underground culture as well as Indian hip-hop scene that has become even more popular since the release of Gully Boy (2019). A perfect example is rapper AS Wonderland. He uploaded a song called ‘Jai Shri Ram’ (which was originally composed by Gangtok-based rapper UNB). Similar to AS Wonderland, Rapper I’m D composed an Assamese song which again invokes sentiments similar to Minmi, “We are Assamese, we are ready to die and kill for our motherland.”

In Assam, celebrities from the field of art and entertainment are leading the protests against the Citizen Amendment Bill (CAB) and now the Citizen Amendment Act (CAA), although very few commercial singers have sung or composed anti-establishment music. One of the most famous figures leading the anti-CAA protest is Zubeen Garg, who incidentally sang the campaign song of the ruling Bharatiya Janta Party (BJP) in the 2016 elections. He, however, has apologised, just like Simanta Shekar who sang it in the previous elections. But neither of the two has so far composed or sang anything for the movement.

It is only Manas Robin, popular commercial Assamese singer, who has composed a protest song, ‘Bodone Aanile Maan Oi’. The undertone is anti-Bengali and openly asks people to fight the issue of illegal Bangladeshis, be it Hindu or Muslim.

The culture of protest music is vibrant and deep-rooted in Assamese society. The current protest is led by musicians and artists and is based on the songs written by legendary Dr Bhupen Hazarika. One can estimate how big a visionary the singer, writer and composer was, given his songs still hold relevance to the utmost optimum level. Ironically, Hazarika fought the 2004 Lok Sabha elections on a BJP ticket. Today, as the state fights against the BJP majority government, it is his songs which lead the masses.

Assamese protest music witnesses a transition, but overall still embodies the values set by the notable names in the past. There has been a paradigm shift, especially in the aggressive approach, and protest music is an essential indicator of it. However, the Assamese community is known to be a peace-loving one, and Dr Bhupen Hazarika’s songs reflected the same ethos that the society holds. The fact that even today, the majority is still using his songs to lead protests and agitations, is proof of those values.