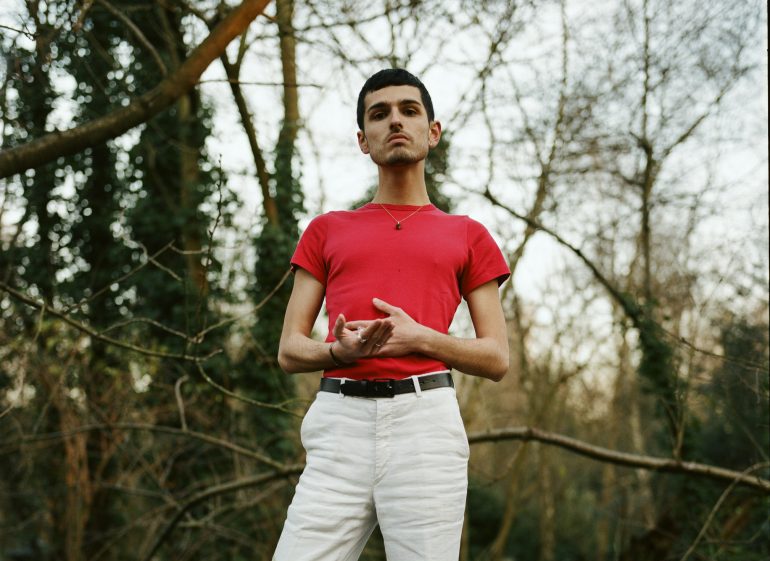 With a whole lotta soul, Indian-Irish crooner Shivum Sharma is on a mission to un-define pop

In many ways, Shivum is your R&B-loving homeboy. He loves Kali Uchis, has had Kumail on daily rotation of late, and dreams of being in the studio with Blood Orange. When he spills about “flipping through music channels on his new satellite box for hours,” as an urban millennial raised on VH1, you can relate. Growing up around South Asian music, the half-Irish Londoner harbours a soft spot for Pakistani disco queen Nazia Hassan.

When the 25-year-old singer-songwriter, producer and DJ dropped his debut EP in 2014, little did he know that ‘Flicker‘, a song he wrote on the fly, would garner a million hits overnight, or that he would be hailed as “London’s new soul hero” (by Dazed and Confused).

Between the piano-inflected soulful Flicker tuned to the beating of a broken heart, and the far-less-vulnerable EP Diamond which released this fall, Shivum Sharma has crystallized a distinct sound denoting unmistakable growth – one that makes him more ingenuous, reflective and intentional in his work. With a COLORS Studios feature now under his belt and having worked with the hottest producers in London, Shivum still finds himself tapping back to the creative rhythms of adolescence.

“There is something brilliant and organic about the way the younger mind works,” he tells A Humming Heart over email. “Knowing that your music will be consumed by multitudes and viewed as a reflection of yourself hugely changes the creative process. Sometimes it even taints it,” he says.

For an artist who cares deeply about doing justice to his music, cultivating creative communities of practice revealed itself to Shivum, as a means to escape the hegemony of big management.

He recalls being set up with many songwriting sessions with experts when he’d just started out. “It’s common practice that works for many, but I wasn’t making any real creative connections or music that felt genuine and cohesive,” Shivum adds. With this in rearview, it dawned on him – the best team is a stone’s throw away.  “That obviously comes from a place of privilege,” he says, “and I constantly remind myself not to take for granted that I am based in London, a place brimming with creativity and brilliant music!”

“Now is a fantastic time to be an independent musician,” says the artist who released Flicker through boutique label National Anthem (HAIM, CHVRCHES) but chose AWAL Recordings, home to indie acts Jungle, Lil Simz, Steve Lacy and Lauv, for Diamond. “They have fantastic open-source resources on navigating the world of self-marketing, royalties, playlisting, managing finances,” which every indie artist would do well to explore, Shivum insists.

After working with Kwes (producer for Damon Albarn, The XX) on Flicker, Shivum co-produced Diamond, his first music in two years, alongside Alex Burey. “Alex and I understand each other creatively in a way I could never imagine having with anyone else,” he says of the south London producer who also shares co-writing credits on the title track.

British left-of-field artist Adam Bainbridge (Kindness) helped put the word out with a dazzling remix of ‘Diamond’. “It was the day before the single dropped that we got chatting [at an online meetup for creatives]. Later I sent them the track and asked on a whim if they’d like to remix it. I was blown away by the piece they sent back,” Shivum recounts.

Turning the focus inward, Shivum admits, “I have periods of not being able to create at all, but I’m trying to be kind to myself and enrich myself with great music, films and art. There’s so much incredible contemporary music coming from South Asia and the diaspora right now and it’s been exciting keeping up.”

Growing up, Shivum listened to a lot of soul, jazz and reggae from his dad’s record collection. “I remember buying my first CD, Survivor by Destiny’s Child when I was six. Along with Rooty by Basement Jaxx and OutKast’s Speakerboxxx, these three albums were extremely formative and their influence still feeds into my music,” he says, revealing how much of the past he carries around with him.

“I’ve grown up around Indian music from films, at concerts, during Diwali at Dadi’s house, and soon recognised how closely music was tied to religion and everyday life in South Asian cultures,” Shivum says, explaining away his affinity and pride for Indian music, particularly the Hindustani classical system. “It is essentially a language, but what strikes me is how improvisatory it is,” he adds.

This perspective probably factors into Shivum’s dogged refusal to define his own music. “It’s always changing, so labelling it is limiting and misleading, especially for the listener. While a tag like ‘piano-pop’ might be relevant for a song like ‘Flicker’, my sound has hugely evolved since then,” Shivum says dismissing an epithet many critics have tried to bestow on him. Channelling trailblazers like SZA, Tame Impala and Jorja Smith, he proclaims, “I am on a mission in my music to re-define it and create a version of pop on my own terms.”

That has its flip side as well, challenging Shivum to tie all his compositions together in a way that flows. “With my influences all over the shop, some songs can sound like they are from two completely different projects. But it’s really something when the subtlest change, like adding a synth line, transports the whole track to a totally different world,” he explains.

With a dreamy falsetto and impeccable vocal control floating over warm guitar chords and elegant instrumentation, minimalism and sensuality scaffold the best of Shivum’s arrangements. It is therefore not surprising that he dreams of collaborating with Dev Hynes (Blood Orange). “His production and musical touch floor me. It makes me want to dance and cry,” he admits. Coupled with the fact that you’d find Shivum spinning plates in fishnet vests at queer collective Chateau’s London studio until it shuttered recently, this collab should happen sooner than later.

Elated to be talking about this other identity, Shivum declares, “DJing and putting mixes together has been one of my favourite things to do in the past two years. It has felt amazing to be able to express myself musically outside of my own work because a lot of what I listen to is much heavier than the music I make.”

“I’ve been getting my life playing at my favourite queer spaces around London!”