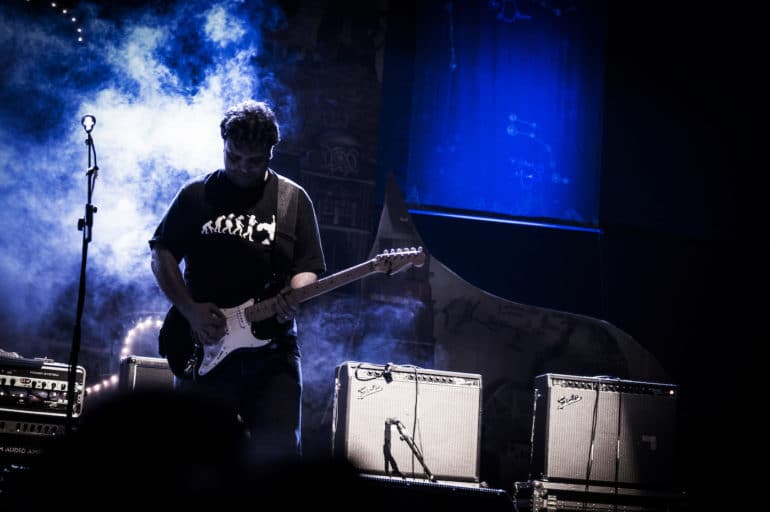 Warren Mendonsa on The Last Analog Generation, indie music and the year ahead

Blackstratblues, the Mumbai based guitar extraordinaire Warren Mendonsa’s project, came out with The Last Analog Generation last year and the band’s fourth full-length release delivered precisely what was expected from a Blackstratblues effort. Gaining love and accolades everywhere, it also managed to top our list of the best Indie albums of 2017.

Nephew of Indian musician and celebrated Bollywood composer Loy Mendonsa of Shankar-Ehsaan-Loy fame, Warren Mendonsa started his career as the guitar player for the Indian rock group Zero before moving to Auckland. Upon his return, he started his solo project Blackstratblues.

Mendonsa’s project is one of the most celebrated indie acts in the country. Apart from that, he’s also of the most sought-after session guitarist in Bollywood. Remember Vishal-Shekhar’s Bang Bang? The title track wouldn’t have sounded half as good without Mendonsa’s electric guitar. Grooved to Jab Harry Met Sejal’s ‘Beech Beech Mein’? It wouldn’t have been the same without his inimitable sound.

“I realised our kid would have a vastly different childhood to the one I had, and this difference would be much more than between our parents’ generation and ours”

The concept for The Analog Generation came about when Mendonsa and his wife found out that they were going to be parents. “I realised our kid would have a vastly different childhood to the one I had, and this difference would be much more than between our parents’ generation and ours,” he said.

The album flows smoothly from ‘North Star’ to ‘Aurora Borealis’ which gives the impression that the songs are created keeping the order in mind. However, Mendonsa says that final order usually comes together toward the end of the recording process, when he has a clearer idea of what the sounds will sound like in their final form. “It also gives me the chance to work on any segues that are needed, like the tails of one song overlapping with the subsequent one. There are a couple of them on this album like between ‘Love Song To The Truth’ and ‘Reconnaissance Mission’, and between ‘Aurora Borealis’ and ‘The Last Analog Generation’,” he explains.

He also states that there’s no fixed method of creating a Blackstratblues tune. “At the time of recording, I could have a full-fledged demo that just needs the placeholder drum, bass and keyboard tracks replaced (like ‘Aurora Borealis’ for example) or a very basic idea that we will jam on in the studio (like ‘Reconnaissance Mission’).”

Some tracks like ‘Lead Chain Swing’ and ‘North Star’ were played live a few times before they were recorded, so the band pretty clear idea of what they were going to do.

An industry veteran among a sea of indie newcomers

“Apart from feeling old, it’s pretty cool to be still relevant when you consider the transitory nature of the music scene”

Blackstratblues has been a staple in the Indian indie rock scene as well as music festivals across for many years. Mendonsa comes from a generation of independent musicians who did not have platforms like YouTube and streaming services at their disposal to share their music. “Apart from feeling old, it’s pretty cool to be still relevant when you consider the transitory nature of the music scene,” he says.

“On one hand, there are so many different media for new artists to showcase their skill, YouTube being the biggest one. On the other hand, I kind of feel it’s a bit harder to cut through the noise and stand out because the audience has so much choice,” he adds.

When asked about his top 3 indie picks of 2017, he says, “I had the pleasure of mixing two of my favourite albums: Tejas’s Make It Happen and The Kush Upadhyay Group’s Impulsive Decisions. I also love Akash Vincent’s EP Polaris.”

He is reasonably optimistic about the rise of independent music in India and feels that the industry is heading towards a time where indie musicians can make a living strictly playing their own music.

However, he remarks, “At this point personally, I still have to balance commercial work with my own music.”

Looking forward to a productive 2018

“I’m doing my first background score for a full-length feature film, so really looking forward to having that out by mid-2018”

Mendonsa hopes to release a new Blackstratblues album before the end of the year. On his Bollywood projects, he states, “I never know in advance which on films I end up playing the guitar. I’m doing my first background score for a full-length feature film, so really looking forward to having that out by mid-2018.”

At the moment, Mendonsa is touring as a sessions guitarist with AR Rahman, Vishal-Shekhar, Amit Trivedi and Karsh Kale. The next Blackstratblues gig is at The Mahindra Blues Festival on Feb 10th.

Listen to The Last Analog Generation