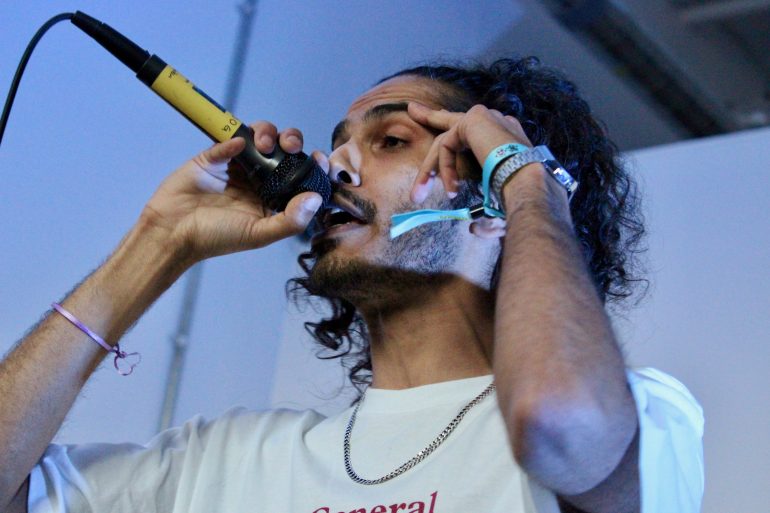 The less I think of boundaries, the broader it gets: UJJY keys into his optimistic approach to existential hip-hop

Stepping into a method actor’s shoes, rapper/producer Ujjval Suri aka UJJY decodes his creative process. “I think of each record as a house,” he tells A Humming Heart. “I ask myself: Does it have windows? Who lives in it? What year is it? How’s the political climate outside?”

For the Vancouver-based artist, this approach was critical to his conceptual debut record, 2018’s Thank God 4 Death allegorising a dark phase in his early 20s. According to UJJY, “The house kept changing until I realised the windows were my eyes and I could hear my parents outside but they couldn’t hear me. From that metaphor, we arrive at a coma, at which point the story of TG4D unfolds.”

Fresh off a new single titled ‘My Plate’ and a feature on the stunning chalo compilation, UJJY feels ready to talk about his teen-flung hip-hop career rapping, writing, producing and engineering with Canada’s Holy Sock Gang. Unsurprisingly, our conversation slips into one on immigration, mental health and the genealogy of local crews, intersected by shouting-out to newfound brown rappers. “I recently heard Curtis Waters and Harm Franklin and they are so f**king dope!” UJJY exclaims, adding to a list of artists he wants to work with or already has.

As a testament to the fertile ground he operates out of, UJJY announces that this year will see some of his unreleased material with legendary Seattle MC Khingz, grassroots label High Voltage-signee 30$gems, and indigenous musician Jeremy Parkin come to light. Over the years, UJJY has co-written extensively with Holy Sock’s Billy Bishop and Dem Rosé Boys, besides collaborating with local artists Amal, Empwer and Rajzilla to name a few. It was Bishop who mixed and mastered ‘My Plate’, UJJY’s first single off an upcoming record and also, introduced him to the artists who would go on to form Holy Sock.

Thriving on humble origins and universality, the collective brought several old crews together, Suri explains, adding, “We have all been friends, making music for years,” as he takes us through a “long and convoluted” local history. Recalling his induction, he says, “I met Billy as an eager 19-year-old. He heard my beats and invited me to hang out. When I got to his place, his basement was lined with turntables, samplers, types of vinyl, a nice a** speaker system. I was like, this is it – I have found the Amp Fiddler to my Dilla!”

“I always knew I’d have to learn to produce if I wanted to get closer to the sounds inside my head. I wanted to follow in Dilla’s footsteps and realized that control over my artistic process was how I would find a sound unique to me. So it was natural, I began to make beats, write/record and mix”, Suri tells AHH. Constantly exploring new ways to communicate his ideas around nostalgia, death, religion and the internet, UJJY now finds himself turning his attention more and more to provenance.

In the first few years of writing raps, he didn’t have a name, going by Wax Monk for a bit because it combined the image of a crate digger with “monks copying scrolls to preserve the truth”. ‘UJJY’ was always a nickname but in recent years, it has become emblematic of the final discovery in his quest for identity, of “pursuing the truth to my truth.” “It is more about accepting myself and the unknown, like a culmination of my lifelong search for belonging,” Suri claims.

As a brown teenager growing up in Delhi and moving to Canada at the turn of the century, Suri has always felt in-between states. “The reverse culture-shock made me feel like I wasn’t Indian enough in India and not Canadian enough for Canada.” He doesn’t begrudge his parents (pictured below) for relocating when they did (it was brave of them, he says), but having dealt with racism all his adult life and at work, these experiences go on to inform the subconscious themes in his music.

“My outlook on life is an existentialist one but it’s more optimistic now,” UJJY proudly confesses, sharing the memory of his first existential attack in elementary school after learning of the solar system, followed by his up-hill battle with mental health issues, leading up to ‘My Plate’s “I believe in me” hook for which he credits his partner Alyssa.

“A lot of it is subconscious and I only make the connections when revisiting it,” he quickly corrects, but sometimes it’s well-thought-out, like MDNGHT PRTNDRS which samples his parents trying to wake him up from a coma. “It was hard convincing them but Indians love high-drama!” Ujjval chuckles, adding that he has come to find a great support system at home over time.

The song also features in chalo’s maiden compilation of South Asian artists, besides having a finsta to its credit, which serves as a memory bank of Suri’s childhood in Delhi. “On the surface, MDNGHT talks about youth, young love, being a good son… but the underlying feeling is this state of questioning,” he says, relating the story behind the breakout hit. “It was also the first song which signalled to me the power of UJJY over Wax Monk. I would have never made a song like that intentionally… it was only when I let go that a song like that fell into my lap.”

A perfectionist, ‘overthinker’ being the descriptive he prefers, UJJY believes his process has undergone a sea-change. “I used to be very cerebral with my music while creating, trying to plot every little detail, but now I try to let the musical direction reveal itself.” As opposed to the debut album that spent 3 years in the mixer before release, everything from the music to the visual art for ‘My Plate’ was completed in a week. The song’s DIY no-budget ingenuity allows its emotional core to shine through, Suri thinks, while his nimble self-assured flow shows promise of growing more complex and rewarding with each project.

Grateful for a loving, healthy and supportive environment that has enabled “this new, more vulnerable layer of music expression to blossom,” Suri admits that self-care and self-doubt conflict in his life as it does in his verses. But he also believes that processing it was possible only when he was “no longer in the thick of it,” rejecting the flawed notion that great pain is a wellspring for great art. “Music has always been a place to explore my identity, a vehicle for self-actualisation,” the Lupe Fiasco and JPEGMAFIA fan adds.

UJJY’s next record God Bless The Robots, due for release next year, similarly deals with the afterlife but via digital life extension or “uploading your mind to the Cloud!”. It’s what’s keeping him busy these days when he is not recording beats and demos. With a new single likely to drop in spring, UJJY tinkers with past sentiments and surreal futures in a lab of his own making, to realise the vision he has for brown hip-hop.

“It’s a funny thing,” he writes in an email. “I enjoy experimenting and defying expectations in the conventional sense but it’s not as fun as defying the expectations I have of myself; to challenge myself and push my creative boundaries. Accepting that I don’t know where I’m going has allowed me to entertain all sorts of sonic possibilities.”

“The less I think about particular sounds or parameters, the closer I get to what I want; the less I focus on the boundaries, the broader my music becomes.”