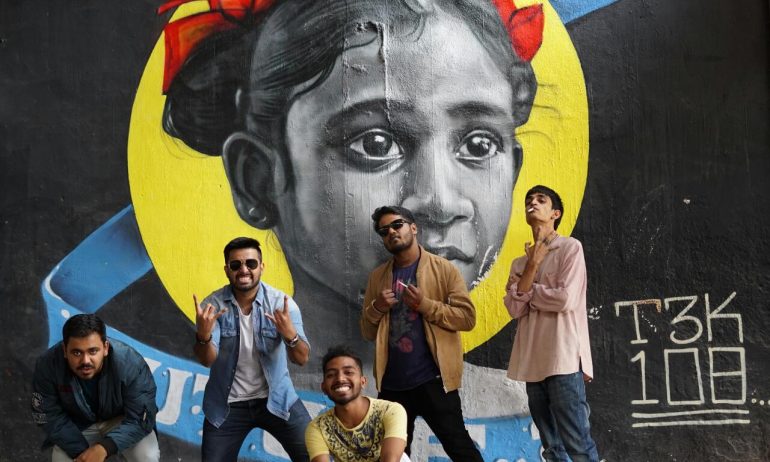 “We are here to politely demand our fucking rights back.”

Social activist Moose Jattana’s calm voice delivers those words with composed aggression on the track ‘Ye Hai Pitrsatta.’ And that’s exactly what Ye Hai Baghawat aims to demand as an album. Bengaluru-based rappers Agaahi Raahi, Nex and Akx have united a crew of creators, producers and perspectives on this fiery political rap project that questions your understanding of the India we live in.

When asked on what makes hip-hop music a perfect foil for expressing dissent, Nex makes it clear, “Hip-hop is protest music. It took birth among the oppressed and is their voice.” Since its underground origins in New York city of the 70s to chart-topping mainstream popularity today, the realms of rap have always provided alternative perspectives with a chance to express. And in India’s diverse identity, this expressive art-form has found even more to speak about on a project like Ye Hai Baghawat.

The album features 7 tracks, each one of them addressing a social evil that plagues our nation. The rap rebels raise their voices on issues like corruption, divisive politics, genocide, patriarchy, racism, casteism and even, our inactivity to react against them. Speaking on what sparked this thought of creating an album of protest rap tracks, Agaahi says, “We made the track ‘Ye Hai Siyasat’ almost a year ago and back then, we were in a dilemma whether to release it as a single. But that led to this idea of a socio-political album inspired by whatever is happening around us.”

The album begins with the titular track ‘Ye Hai Baghawat’, with the trio of Agaahi Raahi, Akx and Nex on rap duties while Faizan supports with vocals. The song marks the beginning of the rap revolution, with an evocative street play format built over minimal drum beats.

The clock is turned back to Doordarshan’s iconic intro tune on ‘Ye Hai Inquilab’, sampled to deliver the message of modern revolution in India. Nex presents a fiery broadcast of the country’s lesser-talked about news stories, even going on to question “Banwaya kyun Aadhar, deni hi nahi thi jab nagarikta?”

‘Ye Hai Siyasat’, the first track to be penned for the album, starts with a sample of Kanhaiya Kumar’s now-famous “Azaadi” speech. While Kanhaiya’s words found big-screen fame on Gully Boy, on ‘Ye Hai Siyasat’, Nex and Agaahi Raahi venture into the country’s darker lanes and issues.

A short interlude to the album, ‘Ye Hai Genocide’ finds Akx delivering incisive verses with spoken word poetry from Manpreet Singh aka MSK. While ‘Ye Hai Jaatiwaad’ sheds light on the oppression of Dalits and other marginalized communities. Indie filmmaker Karim Poocha joins on visual duties for the track with a grimy music video.

Is Ye Hai Baghawat the first out-and-out political and protest rap album to emerge from the Indian hip-hop scene? “Artists, like Ahmer, have released works that are political in nature. But there hasn’t been a political album this direct yet in India” attests Akx.

Other than spreading knowledge and raising their voices in the revolution through hip-hop, rappers like Agaahi Raahi, Akx and Nex are also busy shaping a larger project. Together they are building a community where Bengaluru’s hip-hop minds can feel free to create. Named Wanandaf (one-and-half), the project is now setting the meter rolling for hip-hop culture in the city.

Shedding light on the project, Akx explains “It has become a catalyst for growth for me and a lot of rappers across the city.” A hip-hop brotherhood from Bengaluru, Wanandaf today creates, supports, produces, distributes and inspires over 150 rappers, beatboxers, filmmakers, producers, b-boys and creators of hip-hop culture across the city.

Artists like Nex, Agaahi Raahi, Akx and a project like Wanandaf are a clear testimony to the potential of hip-hop in shaping alternative culture and consciousness in our country. So, keep your ears perked up for these off-the-centre perspectives and the sound of a bold new India, booming ‘Straight Outta Bengaluru!’