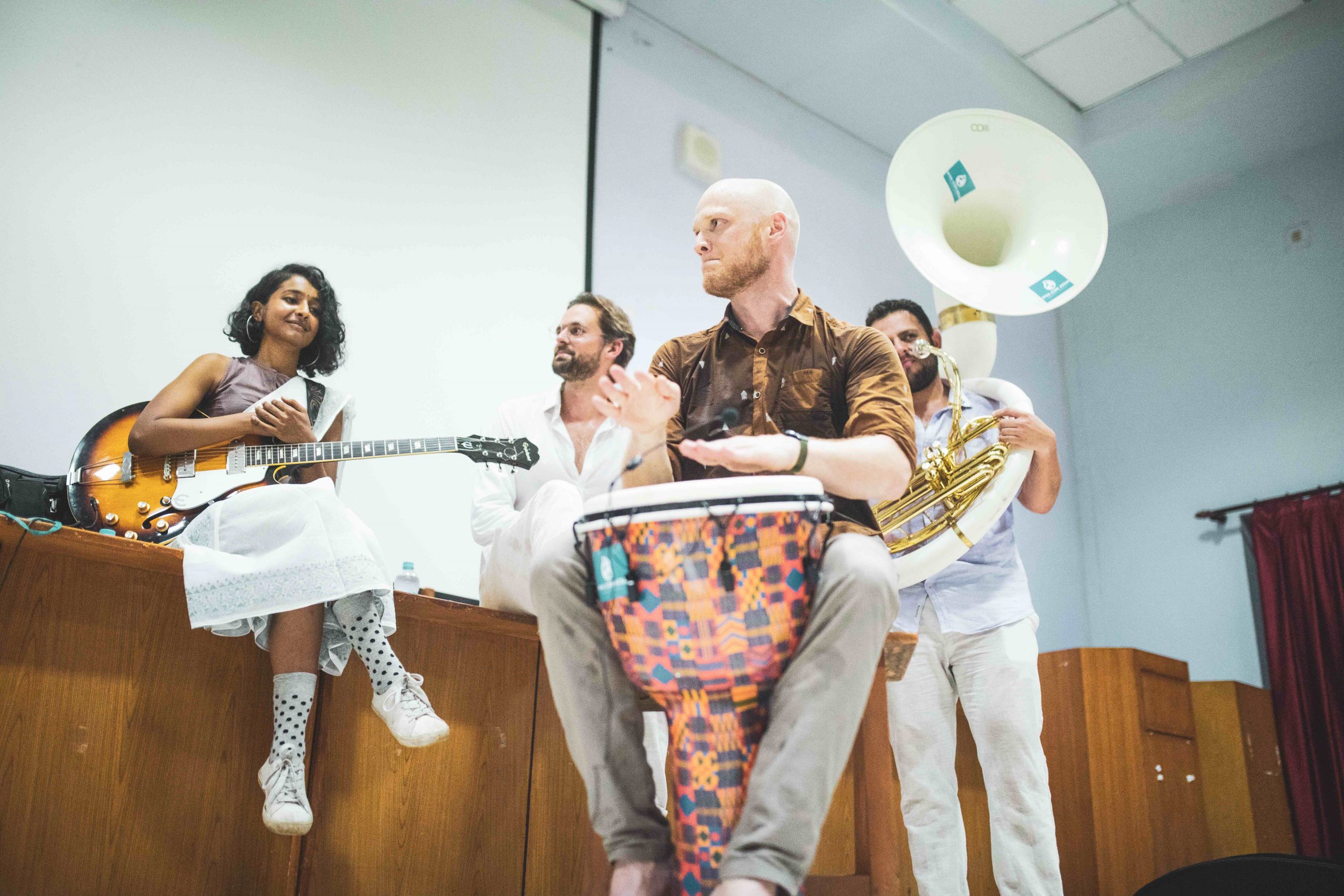 Slated for release next week, Rain is Coming features stories of north India’s water activists and grassroots initiatives, in a bid to both acknowledge the grim reality and celebrate efforts to course-correct. The part-fictional, part-documentary record essays what community action sounds like and how it has spurred local women into leading the charge to make their villages water-secure. It features 13 multi-genre offerings of spoken word, rap verses, electronic beats and ambient sounds, interspersed with Ditty’s balmy reassurances and textured reflections.

Born out of shared concerns and artistic preoccupations, it began to take shape after the trio met in 2019, spending nearly two years thereafter on research and composition. Recounting the inception of Faraway Friends, Ditty tells A Humming Heart, “I met Keno and David at Varanasi, and travelled with them for about a month.”

David had already recorded samples of trains, church bells, nature, indigenous instruments, protest chants, all of which configure the rich tapestry of localised, ambient sound on Rain is Coming. “David and Keno were travelling for a year across the drought-stricken belts in Rajasthan, Uttar Pradesh, and Madhya Pradesh, essentially wherever Viva Con Agua (a Hamburg-based charity) has interwoven programmes with grassroots initiatives,” she reveals over a call from Germany, where she is promoting the record.

“They had begun working on the project but were looking for an Indian artist who worked along the same lines, so they brought me over,” she explains. The trio recorded parts of the album remotely. Ditty recalls long and frequent video calls before she flew to Vienna this January to complete the record.

Not far from where Ditty met David and Keno, water riots were already erupting in Bundelkhand, until the rural women stepped up took control over water distribution and supply. The effervescent presence of these water warriors, or Jal Sahelis, strengthen and drive the record’s folkloric narrative, like in ‘The Legend of Drops,’ where Ditty and Keno chronicle the journey of water into packaged bottles, the sort of commodification that transformed these women into self-appointed “guardians of folklore”.

The elemental and the feminine power of water, as captured in Indian mythology, also finds a fine retelling in the spoken word prologue ‘Intro’. The Bundelkhandi women’s story is captured in ‘Jal Saheli’, a song that holds the musical centre of the record. The women’s voices, recorded at a Jhansi convention, assertively intone, “Pani ki jung mein, hum sab sang mein (In the fight for water, we are together),” easily making for one of the record’s most compelling moments.

“Right from the start, we knew samples and voices would form the backbone and water would run through its spine,” David writes on SoundCloud. “We learned that many of the folk songs passed on indigenous knowledge to the younger generations through stories. This inspired our approach to write this record”, the trio adds as a margin note to the lyrics of ‘Why Bother’, a song about plastic waste featuring strains of a poem by a village elder.

The spirited title track is conspicuously layered with chants from a Jal Yatra that the trio witnessed from their hotel rooftop. Abetted by Ditty and Keno’s verses on creating a greener world through direct action, it transports listeners immediately to the scene. Sharply contrasting this energy, ‘Lullaby of A Tree’ eulogises a felled tree outside the Ditty’s Goa home, its spiritual vacuum recreated and accentuated by David’s tranquil production.

‘Ganga Hotel’ logs the origin of Faraway Friends by playfully juxtaposing voice notes that paint and patch their diverse cultural backgrounds. Ditty’s chorus, “I wanna hear stories from you, so I can see the other side,” emanates warmth fused with separation anxiety, ending in a powerful recognition that digital communication and cross-cultural knowledge exchanges are key to progress.

Twin tracks ‘Ditty’s Window’ and ‘Keno’s Window’ (featuring prolific German tabla player Bernhard Schimpelsberger) drive a final back and forth across continents. Placing the artists in foreign lands, each track outlines their experience with new spaces—Ditty reflecting on streets and super marts in Vienna, while Keno summarises his train rides across North India, penning with remarkable irony that “4G network better than at home, but there is no water supply”.

Bringing the album to a full circle is Om Prakash Tiwari’s hymn for three rivers, with David re-harmonising over the Khajuraho native’s original recording. With creative abandon, David’s experiments with instruments such as chimta and sousaphone and DIY production techniques create layers of sound that work together without sounding monolithic.

Besides helping with proceeds from the record, Ditty hopes to help raise critical awareness and highlight the work of tireless water activists like Tarun Bharat Sangha’s Maulik Sisodia and Welthungerhilfe India’s Pooja Chowdhary. Their interludes feature some of the most direct work on the record, for example, where Pooja notes that the clock on groundwater reserves is ticking. “I feel there is still a lack of space to talk about these things in the music industry,” says Ditty.

And yet, against such a grim backdrop, Rain is Coming chooses hope, celebration and cautious optimism, over the existential pessimism often shrouding climate action. Ditty is confident that Faraway Friends, a growing mixed media arts collective of 25 creatives and changemakers, will continue to create socially relevant art. “When winter dies, we spring to life,” Ditty sings on ‘Spring’, as she watches the water move.

Coming at a time when the music industry is also reckoning with its carbon footprint, Rain is Coming is a radically honest and powerful record, effectively using arts-based advocacy for a critical cause. The project is an outworking of Viva Con Agua’s water conservation projects across Asia and Africa and is being released by their newly-minted recording label Viva Con Agua Music on March 22.