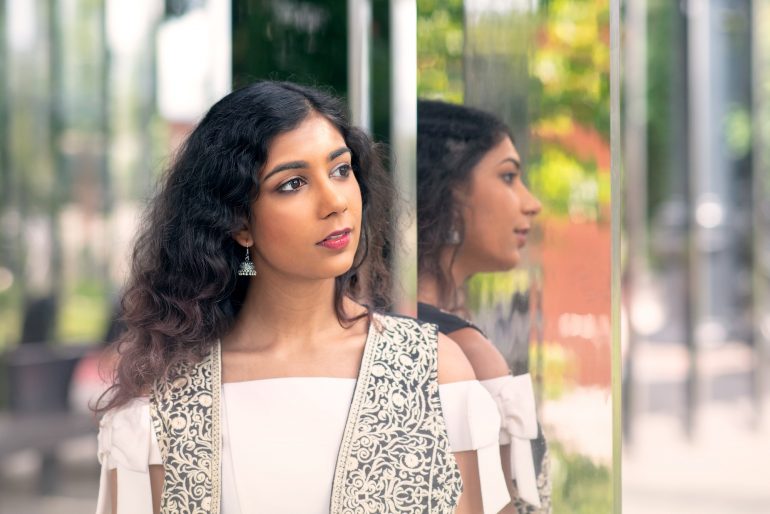 Sweetness and light: Saachi Sen is performing her identities out, one pop song at a time

Mumbai-born Londoner Saachi Sen recently featured on BBC Introducing, for the indie/jazz quartet she fronts and founded in grad school. But Saachi is better known as a singer/songwriter embellishing the Brit-pop landscape with stirring anthems of identity.

For a brown woman in her twenties, Saachi has taken to London’s predominantly white music scene like a duck to water. With a stunning vocal range to match her lively stage persona, her foray into music began with winning the coveted Lynsey de Paul award for songwriting in 2015, followed by a residency at the famed Camden Roundhouse in 2018. However, it was her stint at Pride’s Got Talent last year that introduced her to a wider audience.

“It was wonderful to be representing my gender and my heritage at Pride”, she quips in her conversation with A Humming Heart, sounding palpably excited about her upcoming project. “A song I wrote earlier this year, ‘Pasteis de Nata’ got shortlisted for Abbey Road Studio’s ‘Topline’ songwriting competition during the lockdown,” she shares. This, as well as her new single and music video, has been keeping her busy during the pandemic.

The making of stirring alt-pop anthems

Saachi’s affiliation to legendary studios is not new. “I feel incredibly lucky to have recorded at the places that I have,” she says, referring to her time at Abbey Road as well as Spotify’s Secret Genius Studio, where she met Ramera Abraham back in 2018. The South Asian sound engineer and drummer would go on to co-produce two of Saachi’s most popular tracks, ‘Dark’ and ‘Flaunt’, and even play in some of her recent gigs.

‘Dark’, a song about colourism, was born from Saachi’s own experiences as a dark-skinned girl trying to make it in music. Depicting a broader theme that people recognised – about loving who you are, standing up to racism and colourism, and not changing yourself for anyone – the song was also cathartic for Saachi who detests getting labelled.

‘Flaunt‘ is almost exactly the opposite, a tongue-in-cheek pop song about a trophy boyfriend. But the driving force, as Saachi explains, lies in wanting to make your partner feel great about themselves, “…when their self-esteem is low and they can’t see themselves in the same light as you do. So, despite the focus on appearances, this song is underlined by genuine affection,” Saachi says.

The variety of always exploring new themes and different moods offers Saachi’s music its tour de force. “I feel like I learn more from every new ambience I attempt to create,” Saachi says, recollecting one of the first songs she wrote as a 14-year-old. It was a gentle, jazz-influenced song called ‘Fifty Thousand White Butterflies’. “I bring it back out at a gig sometimes, because it takes me back to a time when there was a lot of blissful innocence and poetic imagery in my writing, which is a hallmark of my lyrics to this day,” she tells AHH.

Sounding comfortable and confident with each composition, songwriting for her is mostly a solitary process. That way, artists can be personal and genuine with their message, she stresses, adding, “The challenge then lies in not becoming so personal that people can’t relate.” That said, she profusely thanks her luck for the creatives she has met and collaborated with in the past year, and looks forward to working with the likes of legendary British-Asian producer Rishi Rich. “The scene has traditionally had a more RnB vibe to it…I’d love them to start opening up to alt-pop!” she notes.

According to Saachi, a great partnership can make collaborations fun and multi-dimensional, “especially if they are as invested as you are.” For example, her pandemic project, a quintessential pop song called “Don’t Say It,” was made with longtime-friend and producer Sam Ellwood. The song hinges on feminine wisdom of not having to undervalue oneself in a relationship and to trust one’s instinct in the absence of red flags.

A tale of two styles

This brings us to the big question – jazz or pop? The answer lies in the contrarieties that colour Saachi’s cross-continental musical journey.

Trained in vocals, guitar and piano, her music is decidedly more influenced by western classical vocals than Hindustani music. Citing Tchaikovsky and Fauré for their “cinematic, sweeping, and deeply emotional scores,” she traces their influence in the works of contemporary artists like Gabrielle Aplin and Dry The River that has, in turn, inspired her.

Having made an early acquaintance with both cultures, Saachi feels emboldened to pull elements from Indian classical music as a way of keeping both traditions close. “The two are as different as water and earth,” she reflects, “One favours an extremely pure, clear timbre in the higher registers, whereas the other is grander yet more grounded.” At the same time, she doesn’t want to feel compelled to write fusion music purely because of her heritage. “I was always keen,” she says, “on evolving the commercial pop side of me that connects back to my folk and singer-songwriter roots.”

“If someone were to visualise me, having only heard my music, they’d probably fail to draw the right picture. But people need to accept the idea that I exist, I have the background that I have, and I make the music that I do.” Proudly flaunting her trademark jhumkas, she asks, “Our artist personas should reflect who we are as people; otherwise, how can we be authentic with our music?”

After moving abroad, Saachi started going over to Camden after school, where she got familiar with modern jazz through the Roundhouse Jazz Collective. Soon she was booking venues at Soho and the Canary Wharf Jazz Festival, eventually forming her own band at university.

“I’ve always loved performing and it’s been great looking back to where I was the year before and being proud of what I’ve achieved,” she muses. In 2019, she not only performed at Trafalgar Square twice, but also opened for Soumik Datta’s latest EP Jangal, and was longlisted for Glastonbury’s emerging talent competition. “Being part of Pride’s Got Talent was an unbelievable milestone for me. It culminated in my biggest gig ever at Trafalgar Square before a crowd of 10,000 people! It meant a lot, to be doing this in the heart of London, my city, on a day that is so incredibly important.”

Presently removed from her natural habitat due to COVID, Saachi is awaiting 2021, when she is scheduled to perform at the Elderflower Fields Festival. Right now, she is working on an unusual concept album in place of the compilation she had initially planned. Reflecting on the wealth of South Asian artists springing up in the UK and further afield, Saachi exclaims, “What I love about the up and coming diaspora artists in my circuit is how everyone’s music is full of their own personality and style!”

And how does Saachi qualify her own personality and style? “I am an Indian girl who grew up with English songs; I’m a geek, a creative and a dreamer. I want to be true to all of that with what I offer to the world.”, confesses the singer.