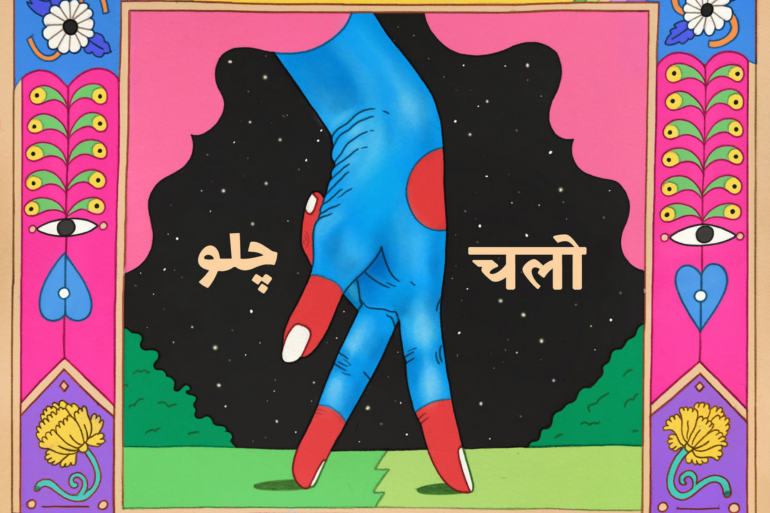 “A love letter to the brown diaspora,” as Jitwam describes it, the multi-disciplinary project aims to unite more than cultures, at a time when art exchanges between India and Pakistan are waning due to cross-border tension and censorship. The onus to recreate this sort of synergy then falls on curators who can distance themselves from the iron grip. “This is exactly why we created chalo,” London-based Balram tells A Humming Heart, “and why I believe we could make this work. I’d like to think we are the missing link, existing outside of borders and putting up a front against overwhelming authoritarianism,” he adds.

In an effort to visualise the region’s songs and skirmishes, chalo releases today through Jitwam’s label, Manipur-based TheJazzDiaries, with an eclectic 28-track compilation featuring brown artists from India, Kashmir and Pakistan. Proceeds from the digital and limited LP sales will go to Human Rights Law Network and Zindagi Trust, championing Dalit rights and education in conflict zones.

“Here was a population of nearly two billion people across eight countries, yet we were pigeonholed in Bollywood and bhangra, Punjabi MC and M.I.A!,” notes a bemused Balram, whose association with the Indian music scene spans close to a decade. In a conversation with AHH, he and Jitwam take us through their plan to remedy this, kicking off with this unique ‘charity’ LP and hinting at more things to come.

Kinetically charged like its title, chalo exists to highlight the dynamic sounds and disparate styles from the region, and celebrate the depth and breadth of talent stemming from the scene. “The artists on this record have each forged their sound, carved their own style; none of them sounds similar,” Jitwam proudly beams adding, “By showcasing this diversity, we are thus muddying the waters of what being ‘brown’ sounds like.” The cross-section of artists on the record breaks down all kinds of borders – geographic, generational, and generic.

Fresh on the heels of his summer compilation aaj kal, Balram via Korwar got in touch with Jitwam, who had been toying with the chalo blueprint for a while. The relative stagnation during COVID-19 coupled with a growing sense of cultural responsibility took over and they spread the word among creatives in their network. “A lot of the artists [on the comp] are friends… or friends of friends, and it was in this spirit that the compilation came to fruition,” Jitwam tells AHH.

The final compilation, both of them agree, came together when a few factors aligned, chiefly affordability, tastes and artists carrying their interest to term, especially with a pandemic hanging overhead. “We also needed to remember that everyone involved in this project has worked on this for free. It’s been a labour of love which saw the light of day ultimately because we believe in the same things,” Balram adds. Take Pakistani artist Natasha Noorani, who not only agreed to feature on the comp, but also aided the curation by introducing Dhruva and Jitwam to Jaubi, a collective of Indian classical musicians from Lahore. Their sarangi-tabla rendition of J Dilla’s ‘Time: The Donut of the Heart‘ occupies a proud spot on the tracklist, three years after its viral splash on YouTube.

Often, the individual struggles of independent artists based in South Asia – and the larger struggles they represent – get redacted from the larger context, or as Noorani puts it, disappears into a void because the TV, radio or digital media don’t really pick it up.

For the actor-model-songwriter who goes by KAVYA, it was both exciting and humbling “to be a part of a community that was bringing light to the Asian diaspora, sharing its raw versatility and also giving back to the community.” Contributing her recent hit single ‘UNDERSCORE’ to the comp, Kavya tells AHH, “We’ve got to grow a belly that’s never satiated without kindness and care at its core. No matter where we travel, where we’re nurtured or where we want to go, it’s our roots that will always be home. This is the first of many more compilations in honour of the act of giving back” she hopes, “because music is the kind of voice no one can ignore.”

Music for music’s sake isn’t chalo’s driving force; a shared perception of music as an agent of change is.

Earlier this year, when Jitwam released music in support of the Black Lives Matter movement, Balram was curating aaj kal to fundraise for COVID-19 relief efforts. “I think it’s just important to be in servitude to something other than your own ‘self’,” the producer tells AHH. “There’s a lot that is wrong with the world today and it’s hard to know what to do and how to do it without drowning in self-doubt.”

“We really just trynna elevate! And find the things that bond us together, rather than focus on the things that tear us apart,” says Jitwam. Expanding on the point, Balram says, “We went into chalo starry-eyed, with an ambition to cover many creative fields,” sharing the roadmap for a documentary, podcast and prints projects to accompany the compilation. With creative director Amanda Liu – who coined the term chalo – at the helm of production, the doc will hold up a mirror to the structural and internal challenges ailing South Asian artists. It is set to feature a number of the artists on the compilation discussing what unites musicians across borders, as a means to answer the question – why are we so underrepresented? – while spotlighting the struggles BIPOC practitioners face in navigating a predominantly white industry.

“We wanted one discipline of chalo to be politically-charged,” Dhruva says, “where we can give space to people to discuss, at length, the issues that are dividing the region. Some episodes also deal with our own missteps with chalo, while championing artists at home who are living with the realities artists in the diaspora only experience on our visits back. With the podcast, produced by executive producer of the project Nigel Mphisa, we want to ensure that we’re not just another voice in the echo chamber.”

“I really wanted to get some music from my parts of India,” Jitwam remarked, in response to whether the record’s urban sound was incidental, “[and] some older music and songs from Bangladesh/Nepal as well… but all in good time.” Admitting that privilege and class status did play a large role in putting this compilation together, Balram added that a number of artists from non-tiered cities were approached but couldn’t afford to give their music out for free. “It’s something we want to address moving forward,” he promises.

Sustained by a united front of brown creatives in a divisive world, chalo, therefore, holds a unique power not only to amplify the artists or the communities they represent but also allow cross-cultural collaborations across the world which will, in turn, bring revenues impacting the entire community. In creating this sense of collective ownership, cultural responsibility and a space for dialogue, chalo has fired an opening salvo to address the defining crisis of our time: How can we find a sense of belonging that embraces the whole community?