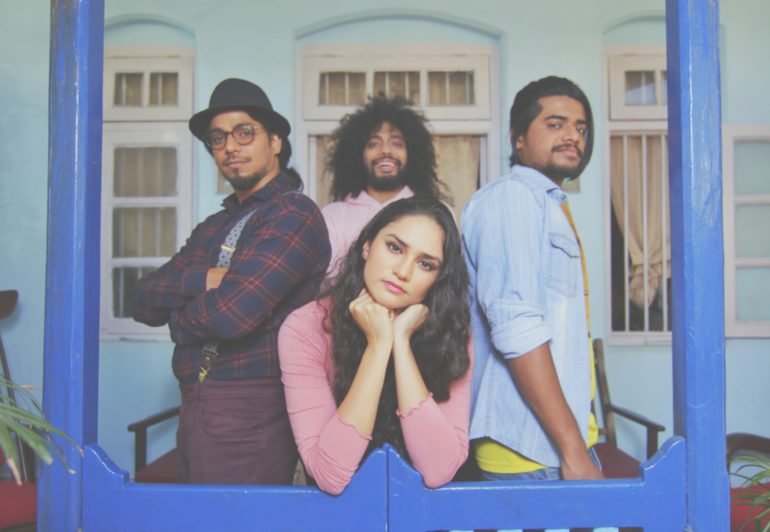 In Shubhangi Joshi’s world, no matter how poetic, there are no coincidences. The Mumbai singer-songwriter and bandleader of alternative pop act Shubhangi Joshi Collective is a self-admitted science fiction fan, so when it comes to mining life lessons from experience, she shuns platitudes on the dreamy ‘Last Ticket Journey’: “They say all that happens is what is meant to be/But I don’t buy that, there’s more to this than I can see.”

The opening track of the collective’s debut full-length album Babelfish layers guitars over swirls of synth and strings (courtesy keyboardist Nishant Nair and violinist Ajay Jayanthi), smooth vocal harmonies and a solidly paced rhythm (from drummer Aamir Ismail and bassist Titus Pinto). It’s a strong message of “cutting off any deadweight and going forward in life” according to Joshi.

The singer-songwriter released her debut EP Talking Away the Night in 2014, presenting laidback rock with a tinge of jazz. Five years on, Joshi and her band pushed the jazz elements forward, blending it with folk, soul and pop on Babelfish. Named after a character/instant translator from sci-fi author Douglas Adams’ cult series The Hitchhiker’s Guide to the Galaxy, Joshi says she admired Adams’ ability to introduce humor in sci-fi. Like the babelfish, music is her medium of expressing and translating life as she knows it.

With the album two weeks away, here’s why we named our album ‘Babelfish’ – a story in pictures 🙂 #Babelfish #ShubhangiJoshiCollective #9thAugust

A post shared by Shubhangi Joshi Collective (@shubhangijoshicollective) on Jul 27, 2019 at 7:14am PDT

Like Adams’ fiction, she also infuses a playfulness and sense of sarcasm in her lyrics and vocal melodies. The theatrical pop of ‘Cynic On the List’ is where this peaks, when Joshi employs a mocking tone about materialism and lofty dreamers. She says, “I try and make my singing more approachable, I want them to get drawn in to how I’m singing and then I want them to know what I’m singing about.” There’s reverse psychology on the seemingly trip-hop leaning ‘Why Stay Away’ and on the laidback, John Mayer-esque ‘Curious Cat’, there’s an ode to a friend who remains a free spirit, expressing a detached sort of appreciation.

Perhaps Joshi’s honied croon is best enjoyed when she’s picking a bone with toxic exes, but having fun with it on the groovy ‘Surfing With The Times’, which was released last month along with a comedic video to match. But there’s also the Latin jazz-inflected ‘Help Me Remember’, in which nature vs nurture is weighed out. In true singer-songwriter style, there’s openhearted lyrics and delicate melodies, but Joshi stays grounded. The deeply personal songs like ‘Foolish’ and ‘Ode to the Moon’ are especially poignant vehicles of catharsis. Joshi says she found relief from inner turmoil as soon as she finished writing these songs and then it took about two years of working with producer and violinist Ajay Jayanthi to see them to completion. “When we decided to start recording the album, we took that as an opportunity to open up and dissect our songs and see what we can do differently. We’ve been playing half of these songs live for nearly three years in a fixed manner,” she says.

In addition to learning and growing as musicians, the band worked with Jayanthi (previously part of alternative rock/fusion band Anand Bhaskar Collective and still part of prog/fusion act Paradigm Shift), who contributed to mould songs like ‘Foolish’ into a sleek, cinematic pop song. Joshi adds, “We had originally written ‘Ode to the Moon’ on guitar, but Ajay was insistent that since it was a personal song, he thought to approach it in a solitary manner.”

At the end of it, Babelfish rightly helps you understand people, whether it’s friends, partners current or former, the headstrong, the cynics and the dreamers. The bandleader finds release every now and then when they perform these songs, but also says she’s addressed her concerns and found peace now that the songs are out. Mastered by Kochi-based Vivek Thomas, the collective are now plotting a run of shows across the country to promote the record, with performances slated in Guwahati, Kolkata, New Delhi, Gurugram, Bengaluru and of course, a homecoming show in Mumbai by the end of September.