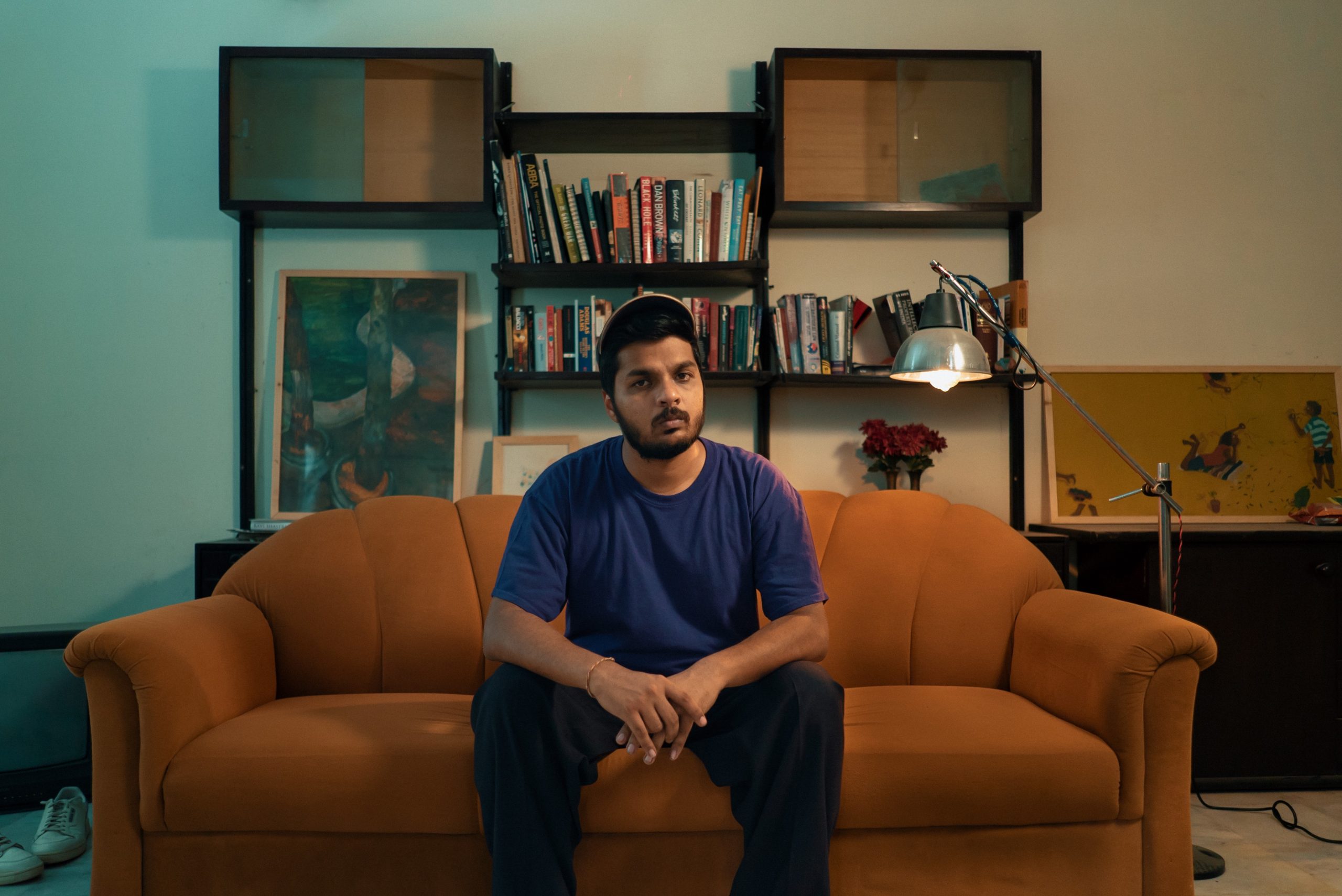 Singer-songwriter, music producer and visual artist from Baroda, Shashwat Bulusu is not a musician you can ignore or put in a box. His versatile, experimental music is hard to confine in a genre, but his storytelling prowess makes for memorable music. However, if an attempt is made to classify the umbrella of sounds into a genre, he would call it narrative songwriting because it’s all a set of fictional stories.

Managed by Pagal Haina, Shaswat has been dabbling in songwriting since 2011. He is also a lawyer, a stand-up comic, and has been trained in tabla.

Currently, on the Aabad tour to give his audience a sense of his upcoming album, the multi-faceted artist gives us an intimate insight into his songwriting for tracks such as ‘Aabad’, ‘Playground’, ‘Winter Winter’ and ‘Charkha’.

You’ve described your Hindi releases as a call and response to each other. ‘Aabad’ reflects unfettered hope for better days to come. ‘Charkha’ responds to this hope and argues for unfettered perseverance to get to the better days. Could you elaborate on your songwriting process for these songs?

Shashwat: ‘Aabad’ is a song, like, when you have a thought that keeps coming back every now and then just when you’re falling asleep? So the melody for ‘Aabad’ just took shape as a song at some point. I put in the process of making it tangible by adding an arrangement around it. The song became about this toxic idea of optimism, where it’s waiting for hope to take you from point A to point B, and let hope be your shell.

‘Charkha’ was like a morning routine, you know, like when you’re brushing your teeth or having a bath, you have this one recurring thought. The melody for ‘Charkha’ emerged like that and the first line, “Anjaam hai kayi, charkha chalta rahe,“ was a motif that kept going on in my head for a while. ‘Charkha’ became this response to ‘Aabad’ in that sense where it talks about this whole hustle culture and grinding really hard, almost to the extent of letting hard work be the boat that drives you. ‘Aabad’ and ‘Charkha’ are like a conversation but they’re extreme ends of that conversation, both devoid of what is happening in reality.

Your Hindi tracks feel a lot more personal than your English tracks which you’ve called fictionalised stories. Does your songwriting process change as you dabble in different languages?

Shashwat: My songwriting in English is mostly based on narratives and inspired by the books I’ve read. It allows me to build layers of absurdity. I found it really difficult to convey stories in Hindi because it was never a literary language for me. It was a language that I used on a general level with everybody. We don’t use Hindi idioms in our day-to-day language. The whole idea of using language as a poetic device in Hindi is not as much but with English, being an urban language, everything’s coded. Hindi became more confessional in the writing.

But now I’ve been spending a lot more time working on the craft of writing in Hindi although the song still doesn’t act as the home for the story, I still have to narrate the story before the songs. But like, it’s now going into the territory of storytelling in Hindi as well.

Eventually, the dream is to be able to write songs in Telugu, but my exposure is through movies and conversations with my grandmother. So, based on that, that’s not enough vocabulary to be able to write a song. So it will take some time. I’ll just have to spend some time with the language and understand what it’s about, and then write the song using that language as a tool.

Could you elaborate a little bit more about this narrative songwriting aspect of your songs?

Shashwat: It’s just something that I picked up when I was trying stand-up comedy in Gujarat in 2012. That was when I learned the craft of telling stories and the idea of the premise and the punch line. It’s always fun to have this whole premise and set just building with your stories. And then let the song, the punch line over there, take you through the world that you’ve built in the storytelling.

I’ve always connected with songs that have had a story around them, like ‘Wake Me Up When September Ends’ by Green Day. When I’m on tour, my audience hears the stories I’ve crafted around the songs. When the songs actually come out, it also builds a community and an environment around the song because of the stories. People take back the stories more than the songs. Storytelling is a tool to drive what I want to do with my audience.

So you talked about your songwriting being a ritualistic thing you do on a daily basis, right?

Shashwat: I try to write something every day, like a phrase or a new song. If there’s something that I’m already working on, I try to add something to it every single day.

Listeners only get to listen to the best version from our side. Though every single writer on this earth has terrible writing that they have to comb through to get to the good phrases. So I try to write every day. Then one day, you slowly sort of finesse your craft, and then you’re able to sort of getting to the good phrases. As a writer I need to be active every day, otherwise, I’ll be out of a catalogue of songs.

Your upcoming album Pinocchio is an album about liars. How did that idea come about?

Shashwat: It’s more about just deconstructing what happens when you lie, from the point of view of the liar. I had a habit of lying compulsively, and it took me quite a while to get out of that habit. It almost becomes like an addiction, where you start lying where, where it’s a matter of wanting to get out of an uncomfortable situation. It starts from a self-preservation thing, but then you can use this in a lot of ways, a notion I have now unlearned.

I can look back at it as patterns that were there. And somehow I think once I started noticing all of these patterns, they just took shape in my songs. I was writing songs around those habits. And then these five years of writing was me trying to flesh out that thought about exploring what all happens when you lie.

What are your music influences and any artists you’d like to collaborate with?

Shashwat: In terms of influences, anything that I like becomes an influence because every artist has something in their toolkit to engage listeners. From Muhammad Rafi to Bon Iver, all have something to offer. I try to see what it is that I really liked about them, and it’s that aspect of their music that comes into play in my own music.

A dream collaboration, albeit impossible, would be to work with Premchand and Manto. They both belong to two different spectrums of political ideologies, Premchand a conservative, and Manto a progressive writer. But both of them were at the top of their craft, and I want to understand how they use writing as a tool.

Shashwat has shows coming up in Delhi, Jaipur and Mohali.