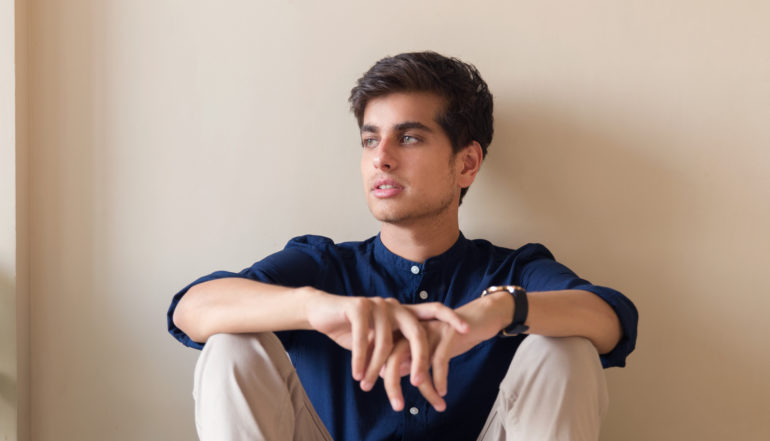 Singer-songwriter Raghav Meattle is a busy man these days. While many are starting to run out of ideas to keep their audience engaged during the lockdown, Raghav has managed to keep himself busy building a community and exploring new ventures. The musician, who went on to be a finalist on the singing competition show The Stage and later released a commendable debut effort with the help of a successful crowd-funding campaign, now works for a commercial music label during the day. At night, he dons an ice-cream cone filter to go live on Instagram to have a chat with upcoming indie musicians. Plus, he continues to write new music too.

Last month, Meattle released a musical commentary on the borderline apathetic, fast-paced lives of city-dwellers, titled ‘City Life’. The music video, directed by Rajdip Ray and shot by Abhimanyu Sengupta, showcases the contrasting life in Mumbai through the eyes of the artist. The visuals portray the juxtaposition of the hustle-bustle of the day with the calmness of the night,  taking shape outside the confines of a city. Although the song was shot a long while ago, Meattle thought the lockdown was a perfect time to release it leaving the audience with certain nostalgia of what life was like before the lockdown.

Raghav chose quite an interesting approach to promote the song through social media. Memes were a huge part of it. Unfurling his motives, he says, “When the song came out, I was doing a lot of celebrity memes; where I was pretending how a typical Bollywood or Hollywood celebrity would market their song. I think that was the fun element behind it because it is a very serious song.”

Raghav’s social media is littered with memes and tweets covering various topics. He makes sure to keep the audience engaged by posting relatable content. With the enforcement of work from home all along this lockdown, he has been using the extra time to focus on building engagement online and figuring out what narrative he wants to shape.

The flexibility to interact with his audience till late at night steered him to start his community outreach activity, which he cheekily calls the ‘Late Night Cone-versations’. This is the part where his ice-cream cone filter avatar comes in. Through this, he aims to build a platform to offer budding artists some kind of traction and inspire people to put out new music during this uncertain time.

Meanwhile, Raghav has also recently joined Big Bang Music as a marketing lead, keeping his day job in tune with his passion for music. “When Big Bang Music happened, I met Gaurav Wadhwa, who is the CEO, and we had a great conversation. We had an aligned view of where there is a void in the music industry,” he says. Raghav expresses how being associated with a commercial label like Big Bang Music (which is Sony Music’s investment in non-film music in India) has given him a broader view of the more commercial music industry and pop culture. Envisioning all that he can do at the label and also personally, he adds, “With a full-time job comes a lot of prioritizing and a lack of sleep, which I am ready to do as long as I can keep doing my music as a solo career,” he says.

Balancing his job and music, Raghav Meattle promises a lot of content in store for his listeners for the future. He is currently working on a live version of one of his songs and aims to release it early next month. He has also finished writing two songs which are ready to be taken into the studio. Apart from his solo music, he is also working on the promo feature of his song ‘Cold, Cold Night’ for a documentary; a collaborative track with Hyderabad-based musician SHOR and a punk-rock track which is to be featured in an indie film, starring Abhay Deol and Monica Dogra.