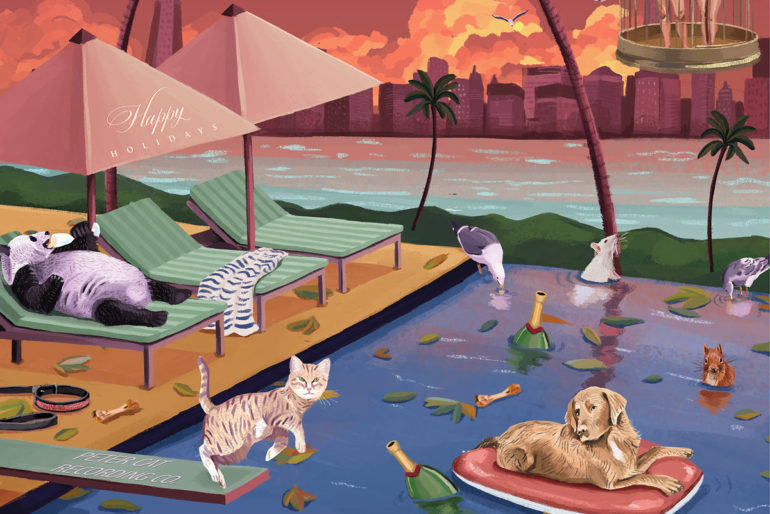 Dropping unannounced releases can be a risky endeavour. Not very often do we come across creators releasing their work spontaneously. Also, if that happens, it is highly unusual for them to do so with a set of rejected or unreleased demos.

However, that’s exactly what Peter Cat Recording Co. did last week. They chose to surprise many of their fans’ inboxes with links to Bandcamp and Instamojo for Happy Holidays, even before making a public announcement the following day.

The quintet requires no introduction to listeners of Indian indie. It is further outlined by the fact that dozens of fans all over the world paid at least USD 7 for a digital copy of the collection of eight coarse and unrefined rejects. “One man’s trash is another’s treasure, this is my own stash of gold,” an emphatic Sanjay Jadhav remarks on their Bandcamp page.

The band said that, like Jadhav, they have received various pleasant reviews for the release. “It’s been nice, considering the complete lack of promotion or marketing,” says Suryakant Sawhney, lead vocalist and guitarist of PCRC.

The band described their next full-length studio release as “something more monumental and important, and a welcome to the new world”. The global pandemic has got everyone rethinking their priorities, and PCRC are no different. “It’s been a tense calm,” says Sawhney. “But I think we’ve decided to focus more on what is required for us to move forward into the future,” he adds.

But the question that still remains is why did they choose to release Happy Holidays amid such strange and anxious times? One could wonder if it was a gesture of goodwill towards their loyal fanbase, or perhaps a welcome discovery by one of the members from an overdue spring cleaning.

But there remains an artistic reason behind their choice as well. “After such a heavy album like Bismillah, something more raw and stripped down felt correct,” the singer explains.

Some of the recordings were made as far back as the band’s very inception. ‘Glass or 2’ was recorded on a tape machine in 2009, but never made it to a studio. Sawhney commented, expressing  that these tracks never fit into either of PCRC’s critically acclaimed albums and thus remained left out till now. “Sometimes, they felt too derivative or simply not honest to our then state of minds,” he clarifies.

However, their decision to not feature their latest release on conventional streaming platforms such as Apple Music or Spotify has confounded many of their listeners. To that end, the Delhi-based band wanted to send out a singular message to their fans. They believe music production to be a full-time job, and pandemic or no pandemic; bills sure do mount up!

“It’s a bit ridiculous; people are willing to buy a pastry for 300 bucks but won’t buy an album which keeps on giving for 500,” says Sawhney.

“We need our fans and people, in general, to realise that in order for the music they love to survive, the economics of the music industry of the last 20 years need to be demolished,” he rues.

Sawhney goes on, saying, “It will need them to re-understand music as something they are not entitled to, but something they need to support responsibly, as well. Streaming almost seems to free the audience from that responsibility.”

The title Happy Holidays is meant to be sarcastic, designed as  an “exorcism in the form of a greeting card.” The album art, made by illustrator Namrata Kumar, is the first time that the band has outsourced the task. The irony is not lost on them, as they try to contrast the current gloomy period against a period always associated with festivity and warmth. “The image and album title together is meant to be a classic greeting card, almost Christmasy,” says Sawhney.

When asked, the band chose to remain mum on providing any additional details about their next endeavour. “Radical” is the only response they would give. But Peter Cat fans should rest easy knowing that they won’t be starving if the next album isn’t here soon. The band says that they have a treasure trove of discarded demos and melodies that never saw the light of the day. “We will throw some out occasionally,” says Sawhney, providing a glimmer of hope in these otherwise uncertain times.