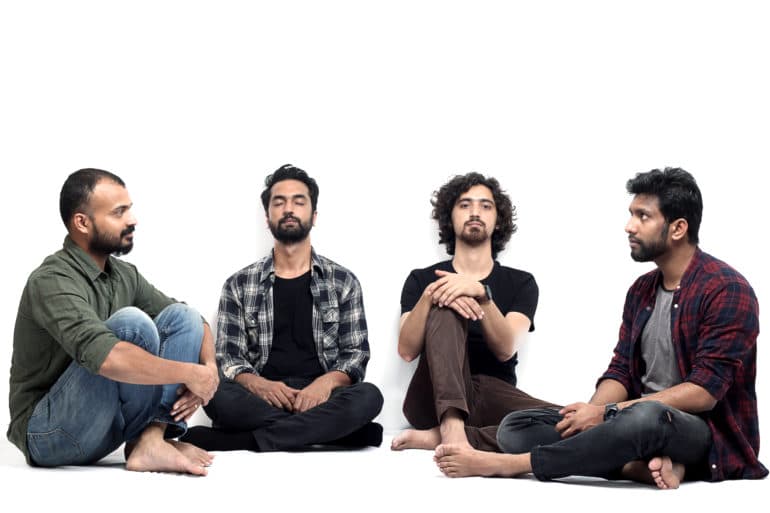 Photo | Courtesy of the Artist

Parvaaz on working on their new album, playing live gigs and Bollywood

It’s a fascinating sight to see close to 50 people standing shoulder-to-shoulder, singing along to Kashmiri rock songs in a pub in Mumbai. But anyone who has ever attended a Parvaaz concert can attest to the fact that the band can captivate an audience like no other Indian band.

“Last year this time, we were in Varanasi,” says vocalist Khalid Ahmed. “It feels really good to play in different parts [of the country]. Every musician wants to spread his music, but there aren’t many mediums apart from YouTube or TV to publish it. So the only way to grow is to play live music everywhere.”

In Mumbai to record their second full-length studio album, Parvaaz was formed in 2011 in Bangalore, when Ahmed and Kashif Iqbal (guitar) were joined by Fidel D’souza (bass) and Sachin Banandur (drums) to complete the band, leading to their debut EP Behosh in 2012. They followed it up with their first studio album Baran in 2014, which was met with widespread critical acclaim.

The band spent over two weeks recording at the Yash Raj Studio in Mumbai, often working late hours – snippets of which can be found on their Instagram stories. “You can probably call it our first proper studio album,” quips Banandur. “We’ve always been in smaller spaces, so it’s out of our comfort zone,” adding that they have never recorded outside Bangalore. “It was a really good experience equipment-wise, as well as working environment-wise,” adds Ahmed.

Scheduled to release in last quarter of this year, Parvaaz’s new album will be having eight songs, which might seem less at first. But people acquainted with their previous works will be quick to point out that their songs are often beyond the standard runtime – ‘Baran’ runs just over 13 minutes.

Amongst these eight songs, one was initially composed back in 2009 but never made it to Behosh or Baran. “We’ve added a few parts to that, and have been experimenting with them in the studio,” said Ahmed. “It’s probably going to be a fresher blend of all things that the band is actively trying to put together,” adds D’souza.

But how does Parvaaz produce such ingenious songs? “For some songs, Khalid has a melody in his head and we would come to a jam room and we’d build up on that,” says Banandur, as the other members nodded in agreement. “The other process, which is longer, is that we come into the jam room and jam for hours together. We have a small tape recorder where we record the whole thing. These sessions last about three hours, after which we go back home and listen to it.”

“We figure out which parts work, which don’t. You find something interesting, you come back the next day and build up on that. We usually focus on our individual parts,” says D’souza.

Ahmed also usually makes a vocal melody first, while making the tune of the entire song. Lyrics usually come in the latter part, which often includes a personal story or an experience, according to D’souza.

“For this album, we did pre-production, we recorded rough demos. We saw the bars and the sections of songs, and then we came here. We had a clearer idea of the album once we came and worked in the studio. Sometimes, Shantanu (Hudlikar, sound engineer at the Yash Raj Studios) would give us some advice while mixing the tracks,” says Ahmed.

The band wanted to release a second album as soon as 2015. However, with busy schedules full of tours across the country, they never found the time to record new material. Thus came two singles – ‘Shaad’ and ‘Colour White’ in 2017, which would have been part of a new album.

“But we’re finally in a space to go to the studio and record new stuff. Management and everyone else gives you deadlines, but even for us, the idea of making a new album was always there, but now we feel is the right time to release a new album,” says Ahmed.

Choosing the eight songs also has an entire process for the quartet. “We let it season at the gigs – we played a lot of them live, and see how we felt about it. Sometimes, if we don’t like the song too much, we even chuck it. However, most of the new songs we haven’t performed live ever,” adds Ahmed.

That would explain the inclusion of two new songs at their Mumbai gig, one of which was ‘Shabaan’. The setlist for these gigs is always decided on the day of the gig. But sometimes, it might change at the last minute. “Some places, we get requests, which normally we wouldn’t play. Perhaps after this album, we’ll have a proper setlist which we’ll stick to,” says Banandur.

In their previous conversation with A Humming Heart, the band stated, “The Bollywood machine obviously exerts an influence over the average person’s listening.” Do they think it’s been that way for them after ‘Beparwah’ was released as a part of the soundtrack for KK Menon’s Vodka Diaries?

“It’s nice to have an experience where your music is in a movie. But until and unless you’re not making a thoroughly composed soundtrack for the film, it’s different. For Vodka Diaries, we just had to re-record a track which had already been released,” says Ahmed.

But would Parvaaz be open to making music for a Bollywood movie in the future? “If the subject of the movie really attracts us, why not?” says Ahmed.