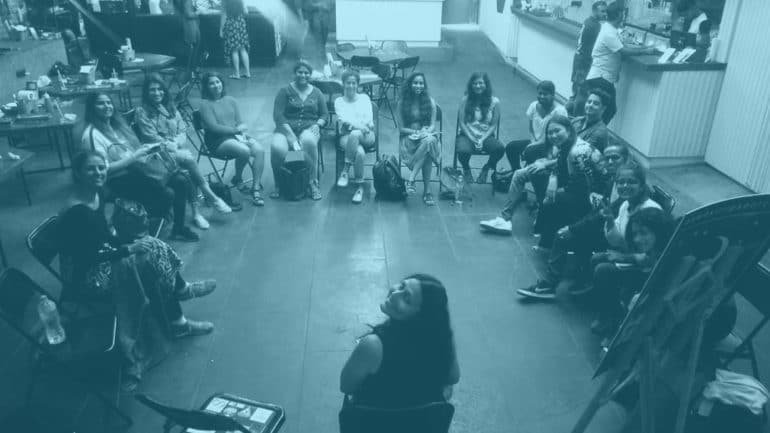 Nush Lewis wears many metaphorical hats. One side of the Mumbai-based singer-songwriter is her harp and piano playing. She has released two EPs under her own name and frequently collaborates with independent musicians in Mumbai. The other side is her experience as a music educator. Lewis’ stints as a piano instructor at the Furtados School of Music and pro course co-ordinator at the True School of Music eventually led her to taking on entrepreneurial duties for her passion project – Offset – which is her music education company.

Lewis started Offset in 2017 with producer Ayan De. The duo observed a rising trend of music workshops and clinics in the country and realized that they could organize constructive workshops if they curated them properly. When asked about how the unconventional name for the company came about, Lewis says, “It’s strange really. You know how musicians say, ‘I’ve come here to do a set, and on my set, I’m going to be doing this’ And then it got me thinking – off your set what would you do? You would then learn.”

The duo organised the company’s first workshop together, focusing on studio drumming featuring Jai Row Kavi, which Lewis says was quite well-received. De left the company soon after due to time constraints and the responsibility of all activities fell solely on Lewis. She has since organised a dozen workshops, ranging from vocal training with Hebe Jones and Vasundhara Vee; fusion of Indian classical and western contemporary with singer Chandana Bala and guitarist Sanjay Divecha; songwriting and arrangement with guitarist Warren Mendonsa; mixing techniques with KJ Singh; and also discussion-based workshops like producer-artist communication with Keshav Dhar and Vishal J Singh; and managing finances with 4/4 Experiences’ Nikhil Udupa and Himanshu Vaswani.

The ideas for new workshops arise organically. Lewis says she sometimes gets ideas when she’s out watching bands or musicians play, and tries to build something around that. She also tries to understand what an artist’s contribution could be to the workshop. “We look at an artist and see what they can bring to the table. That’s how this comes about and how we curate all our workshops,” she says. Artists have approached Lewis with ideas in the past, but apart from Keshav Dhar and Vishal Singh’s workshop, nothing has materialized yet due to timing issues.

Workshops are usually scheduled for a duration of three to four hours, but Lewis mentions that some workshops have run longer in the past, like in the case of Jai Row Kavi’s workshop that ran for almost five hours. The company charges about ₹2000 for workshops that are practical in nature, and discussion-based workshops organized at Levi’s Lounge are through RSVP. Most sessions are limited to between 20-25 attendees. Lewis says it’s mainly because of two reasons. One is the space constraint posed by Mumbai. The venues used by the company can occupy a limited number of people, like the main control room at Island City Studios or the erstwhile Antisocial in Khar. Another reason is they don’t want to dilute the experience for everyone. “I’m okay with restricting the number just so that everyone gets what they came for, and what they paid for,” says Lewis.

Running these workshops comes with a cost. Lewis has to account for space rental, artist fees, and other miscellaneous expenses. When asked if people might gravitate towards free workshops instead of paid ones, Lewis disagrees and says, “The moment you put a price to something, it carries some value. You are paying for an artist’s time and knowledge. You are in a room with them and getting something out of it. We have had attendees from outside the city, and that gives me the confidence to do paid workshops.”

Lewis intends to do longer workshops that extend to multiple days but doesn’t plan on taking on any until she finds a sponsor who is willing to invest some money for certain things like space rental and equipment. “I don’t want to cross that line. I don’t want to increase the cost and make it inaccessible. If I can bring down my admission fee for the students, I could then work it out.”

Lewis has ideas about recording and distributing these workshops and wants to create Offset’s own online portal where people could pay and download videos of these sessions. There is no intention to start live streaming paid workshops as she believes it would be unfair to the people who paid for it. Musicians located in other major cities in the country like Delhi, Bengaluru and Guwahati have posted on Offset’s social media requesting workshops in their cities. She does want to take some specific workshops on a multi-city tour, but wants to first figure out if the same fee structure would work for other cities.

Currently, Lewis is seeking brand collaborations to kickstart an online series in a roundtable discussion format curated by music journalist Amit Gurbaxani. She also had T-shirts designed by graphic design firm Squares & Squiggles that contribute, in part, to raising funds for the company and its operations. For future sessions, Lewis wants Offset to feature artists like singer-songwriter Ankur Tewari on a workshop on lyric writing, and guitarist/producer Randolph Corriea on live guitar performance. She also wants to bring back certain people, like Jai Row Kavi, to do a workshop on new topics. “There are people I would love to work with, and just try to get them more involved in music education. That’s when kids will be interested and be more like, ‘we wanna do this!'”.