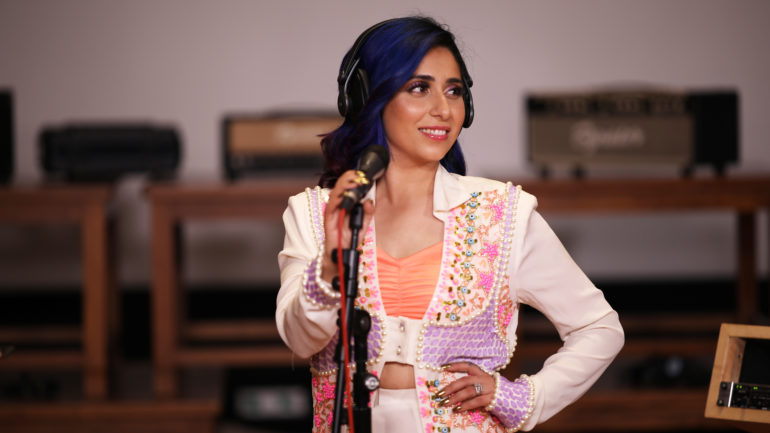 Neha Bhasin’s musical career is a fascinating journey to track. She came into limelight after winning Channel V’s Popstars and continues to stay in it through a successful spell in the Indian film music industry. The multiple award-winning vocalist’s latest independent project focuses on the revival of Punjabi folk songs.

Along with her husband, Indian film music director Sameer Uddin, Neha recently launched the FolkTales project on YouTube, which features live performances of her renditions of Punjabi folk songs.

Talking about how the project came about, Neha says that Season 1 was something that she and Sameer had wanted to do for a very long time. In the past, they had been approached by Coke Studio and MTV Unplugged. But somehow, either due to time constraints or creative differences, things didn’t work out. So, it was always on their minds to create a property wherein they could do “very Punjabi folk kind of music,” their own way. Neha says that fortunately, they are at that point in their lives when they can curate, create and back up projects like this through their company 5AM Audio.

Neha’s journey of Punjabi folk songs started with ‘Lathe Di Chadar’ in 2014. At that point, a lot of digital companies were sprouting up in the country, and people were asking them to do film covers, which didn’t grab their interest. If at all they had to sing music from the past, they would revive folk music. The couple recorded ‘Lathe Di Chadar’ in a casual recording session at their house. They soon began shooting the song’s video in the lanes of Bandra. “The idea is that you don’t want to be tied down in chains to what’s happening and popular,”  says Neha.

With FolkTales, Neha aims to offer a raw live performance with no room for any kind of manipulation. “And it’s very beautiful that we were able to achieve that,” she says. While the primary inspiration behind the project was the yesteryears, Neha says they wanted to experience what it felt like to record four or five songs completely live with everyone in a room. “Even if one person sneezes, you have to do the whole take again. At the end of the day, the engineers, the musicians, me as the singer—we’re all trained to perform live. And yet, due to the technology today, we’re completely missing that. We wanted to take that experience to our listeners and viewers,” she explains.

Talking about plans for FolkTales’ audio launch on streaming platforms, Neha says that the project is also an experiment in the way that they are releasing it. However, with the 21-day nationwide lockdown due to COVID-19, their release plans are in flux.

“We are taking out a song a week on YouTube and two songs every two weeks on audio streaming platforms,” she says. They aim to put out the entire season by the end of May. “It has to be heard in one go—streamed together—that’s the experience that we want to give people,” she says.

Blending the old with new

In the era of remakes and remixes, a well-produced folk rendition can hit chords with a younger audience who may have never stumbled upon it otherwise. ‘Nai Jaana’ is a Punjabi folk song sung at weddings and Neha released a rendition of the same in 2016. It is also a song that is very close to her heart. Her mother performed it at weddings, and Neha sang it at her sister’s wedding. They shot the video in her friend’s office, transforming the entire space into the setup that one sees. “Today, everyone wants to do renditions of ‘Nai Jaana’,” she says.

Last year, Neha released the single, ‘Meri Odhe Naal’, which blends traditional Punjabi folk with new-age Punjabi funk. “Since Sameer and I have both been brought up in modern households and have listened to modern music, our sensibilities are always a little mixed. They’ll never be completely traditional or completely western,” she explains. So, while ‘Meri Odhe Naal’ is bhangra, it’s not traditional bhangra. Its dhols have been played very traditionally—Sameer went to Ludhiana, and recorded with very talented musicians—but the vibe of the song, its soundscape is more global, she explains.

Future plans for the FolkTales project include more seasons. At some point, the project will also be exploring more regional languages. They also plan to collaborate with other artists and invite them to participate and come on board. In the first season, they had guest musicians such as vocalist Romey Gill and violinist Jeetu Thakur.

During the lockdown, Neha says she has a lot on her plate. She says she is spending her time—like everyone else—cleaning and cooking a lot! While she is used to working from home and is meditating and working out as before, she is also doing her riyaz and virtual music lessons with her vocal coach. Moreover, she is busy working on taking FolkTales Live on ground. Once everything is back to normal, she hopes to do two concerts with the project. She also plans to start work on Season 2 soon and says there will also be some original music that she is already writing and composing.