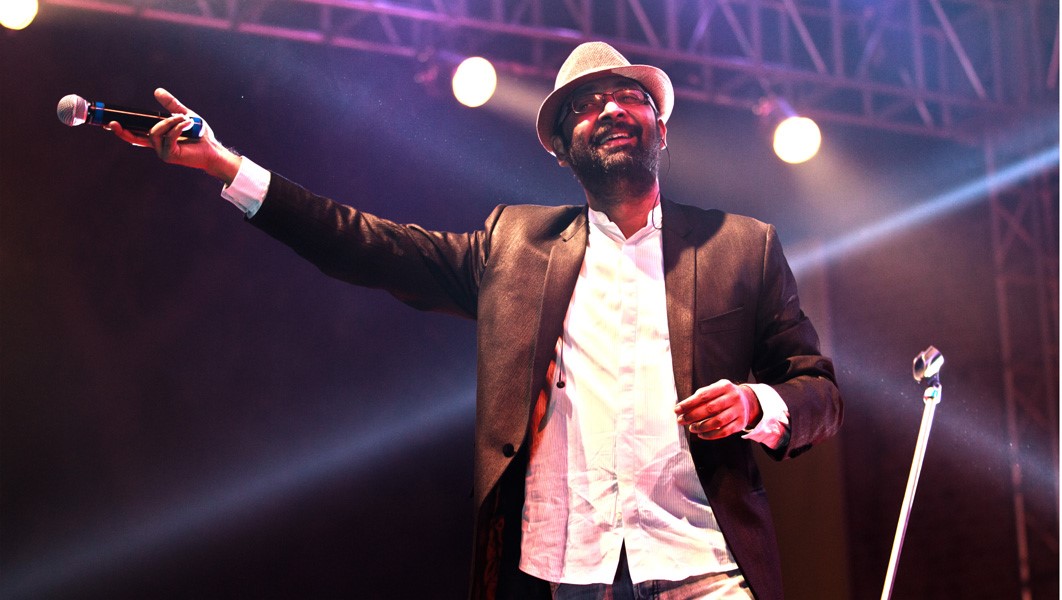 It’s heart-warming to witness the rise of an independent musician. Mohan Kannan is one such musician. From co-founding the Pune-based rock band Agnee, to lending his voice for songs in movies such as Cocktail and Laal Singh Chadha, he has many achieved many accolades over his music career spanning 25 years.

Mohan is now busier than ever. And he is not someone who shies away from experimentation. In fact, there’s a lot to be learned from his willingness to experiment, push personal boundaries and progress in an industry that is all too comfortable with neat boxes and keeping artists in them.

In this conversation, A Humming Heart spoke with Mohan Kannan about his upcoming projects, his newest adventure, The Mohan Kannan Experience, his thoughts on the direction of India’s independent music scene and what drives him to forge new metals.

What is the one difference in the music-making process when it comes to film music versus indie music?

The one main differentiator in the creative process is the fact that, when making film music, the director’s vision for the film is paramount. We as musicians [or] music directors have to justify and cater to that vision in the best way possible. It’s at the very least a two-way process, and we compose/write to a brief that stems from the story of the film and the situation we’re creating the song for. For independent music, we can completely let the song take its own path without any specific direction.

An interesting perspective that you can bring to the conversation is that of experience. You’ve been a consistent part of the Indian independent music scene for many years now. What are your thoughts on the way the scene has grown? Also, maybe, how it needs to grow?

I think there are far more artists in the limelight [who are now] doing commercially well in the independent scene. There’s an ease of creating and releasing music that’s been made possible by multiple platforms being available, and also of being able to practically finish a song from composition to final master at home. Also, there seems to be an upward trend in consumption of non-film music, although I am yet to see anything significant in that regard. I think we have a long way to go to be able to have non-film music and film music on a comparable footing in terms of the ability to promote and also the quality consciousness of the music that’s put out there.

From the time you entered the scene to now, a lot has changed. Do you see a fundamental difference in the way musicians approach their work now?

On stage, I’ve been pleasantly surprised to see bands spending a lot of effort on being tight and delivering impactful performances. However, the basics remain the same—musicality, performance, impact, and the ability to connect with the audience will always be the parameters that will make concerts memorable. It’s just that I think there are a lot more acts now that strive on each of these parameters than they did a few years ago. On the recording side of things, I’m not very sure if there’s much of a difference in the way musicians approach their work. I do assume that access to so much music online will have only helped everyone broaden their thinking with regard to the kind of genres they would explore, as it has helped me.

What do you view as a defining moment in your musical career? Something that completely shifted the way you approach your craft?

I don’t think there’s really been one defining moment that has made me change the way I approach composing or singing or playing music. I have always believed that being honest as a musician is the most important thing in the world. As long as I can convey an emotion honestly, it will connect with a listener. I continue to have that belief today. However, in the sense of success and the things that come with it, the release of ‘Aahatein’ in its lyric-less version was pretty much a turning point for Agnee. We became a household name after that, and we’ve been thankful to that song ever since.

Looking even just at the commercial, film music industry— what are the ways in which independent musicians can become bigger players in that space? And, what is the importance of that happening?

I believe films are the largest platform to release music at this point in India, and they will continue to be for a while.

I think independent artists need to do nothing except be accepting of film offers. Film music is not a genre in itself, and because of the wide variety of films being made today, there is scope for all kinds of music in the industry. Almost every genre finds a place in some film or the other. So, I don’t think that’s really been the issue over the last few years at least.

The artist, however, needs to be open to working on a brief and collaborating with another creative person towards a visual goal. They should be able to take inputs from people who are not necessarily music experts, but are the ones who are the taking the film to its ultimate vision, like the director or the producer of the film. As to the importance of this happening, I believe films are the largest platform to release music at this point in India, and they will continue to be for a while. So, for a musician, getting their song promoted heavily is always a win-win, and it would be great for more and more musicians to be able to contribute to and gain from the film industry.

What is the next musical vision you’re working towards?

There are many exciting projects that are happening simultaneously. Agnee has over 25 releases between now and the end of next year. I have some solo songs of mine coming out in the independent scene. I am working on a couple of films as a music director. We, of course, continue doing shows as Agnee, and we always look forward to those. I’m also launching my solo act, The Mohan Kannan Experience, which is a performance of all my songs in films. It’s going to be a hectic few months, and I can’t wait.