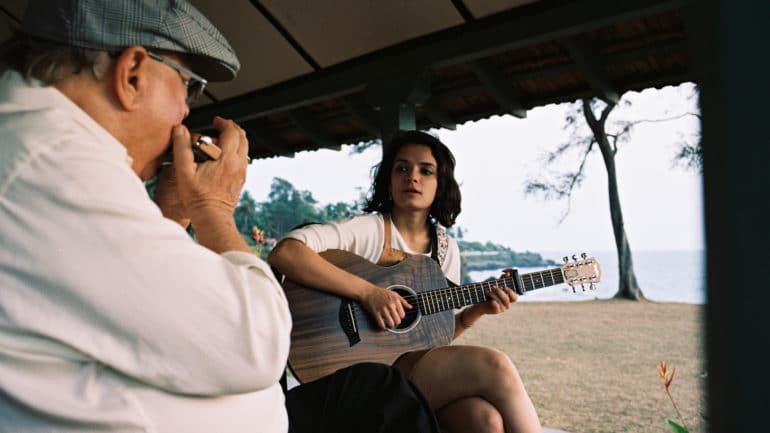 Mali a.k.a Maalavika Manoj is a singer-songwriter based out of Mumbai. After making a mark in the Tamil music industry, Mali joined the independent music industry last year with the release of her solo debut album, Rush. Yesterday, she released her first single of 2018, ‘Play’, a song dedicated to and featuring her grandfather.

She comes from a family of engineers and entrepreneurs, yet she was always encouraged to pursue her passion for music. But for Mali, a profession in music seemed unlikely. “I used to think that music would just be my passion project and I’d be doing a fancy high paying job and making enough money to support my love for it. But after dabbling with a few jobs I realised that I’m not really cut out for a life in the corporate ladder, and all I wanted was to be my own boss and devote my time to doing the one thing I was best at,” she says.

She draws her musical inspiration from her grandfather. “Neither of my parents can play an instrument or have had any musical training, but my grandfather was extremely musical.” Even though he wasn’t formally trained, he had a natural flair for music. He formed a band in college and performed here and there, but subsequently, quit music to ‘get serious’ with his life.

“When I was a kid, the whole family would get together, and my grandfather would have the harmonica thrust at him, and we’d all get him to play for us. He had a unique set of songs he knew and played every time – old Bollywood, Malayalam folk and marching band tunes. Those were the sounds of my childhood,” Mali reminisces. “Please find the strength to play us just one more, we’d love to hear you play,” she sings on ‘Play’.

She goes on to talk about how her childhood memories of her grandfather playing the harmonica inspired her latest track. “Now after having moved far from my family and that life, I miss hearing him play. I wished I could travel back in time and talk to him, and that was what inspired the song,” she says.

She remembers how the song came into being. Her grandmother sent her some old photos of her grandfather which reminded her of a simpler time in her life; she instantly teared up. Talking about her vision of the song, she says, “The song was written in less than an hour, and I remember crying at the end of it. I also thought it would be a great idea to have him play on the song not just because it was about him, but I wanted to document his life and story somehow and this was a good chance to do so.”

Since her grandfather also features on the song, it was an interesting process to record it. “He was really nervous about this at the start. When I got him to record for the song he was really intimidated by the deafening silence of a recording setup and the performance pressure that came with it. But by the time we started shootings the video, he had already loosened up and gotten comfortable with being in front of the camera and spinning out his repertoire of folk songs. It was an emotional and extremely fulfilling journey doing this,” she recounts.

It has been a little over a year since Mali released her debut solo album and since then she has performed at shows all over the country. She observes, “Rush helped me realise a lot of things about my own songwriting and the direction of my sound. I have been working towards bettering myself on various fronts ever since.”

Even though she has gone the independent route, she still keeps in touch with her roots in the Tamil music industry. Among others, she still sings with Anirudh Ravichander on his shows or movie projects.

She has also performed alongside many independent artists over the last few months, which includes pop star on the rise, Tejas. On her experience of playing with various artists, Mali explains, “It helps me to focus more on an instrument and on what’s good for the song and the performance. All the musicians and artists I work with right now are extremely talented, wonderful people, and are a constant source of inspiration and support to me.”

Mali is now collecting songs for her first full-length album but says that she will only start working on it in 2019. “I find my new stuff going into a more indie pop space but I hear the sound being a lot more homogenous than the Rush EP which was fairly diverse in its sound,” she teases.

Listen to her song ‘Play’ below.