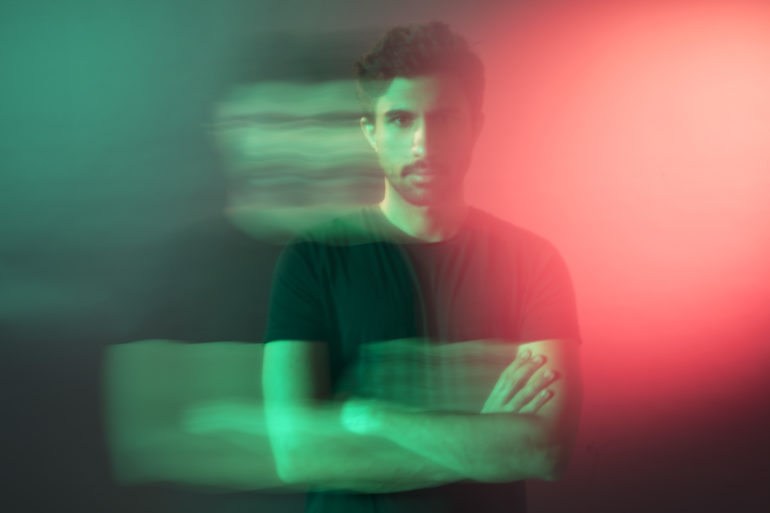 Kabeer Kathpalia aka OAFF finds beauty and power in the grey

There surely is an underlying sense of the inevitable at play when Kabeer Kathpalia, who’s majored in Mathematics and minored in Physics, decides to quit the numbers game and produces music. He then releases a track that registers over a million hits on Spotify. Thanks to its magic algorithms close to five lakh human beings in nearly 80 different countries collectively streamed his music over forty plus hours (equivalent to four years of listening). You can take a guy out of math but can’t take the math out of him. What doesn’t quite add up however is his moniker – OAFF.

Surely that’s not very oaf-like then. Success, not just academia but also the creative field would practically be scoffed at by the oaf council. Although, we hear it hasn’t been formed yet. Digressions apart Kabeer explains that making music helps him deal with his Obsessive Compulsive Disorder (OCD). “There was a point when my OCD patterns and habits were starting to overwhelm me, my mind would want everything to be in structures and clearly compartmentalised, but music reflected the truth that life is not about watertight compartments and a lot of beauty and power lies in the grey.” Being OAFF allows him to be clumsy and foolish and let him make music without submitting to the pressure of some preconceived idea or notion.

Kabeer released his first song, ‘For a While’, in collaboration with an erstwhile classmate and bandmate Savera Metha was put out in September 2018. The instantly calming, laid-back, atmospheric ditty catapulted him to the modest heights of Spotify influenced stardom. It perhaps has to do with how long he’s known Savera now, an association that dates back firmly into chaddi buddy territory. “I love working with him. We’ve got very similar sensibilities and it’s also important for me to be able to hang with the people whom I’m collaborating. How else can one expose the most vulnerable parts of you to each other while creating music?” he ponders.

His second release ‘Frontline’, came two months later. “I tried sleeping in your covers, it don’t smell of you no more” sings Lothika Jha who collaborated with OAFF on this track. Lothika, he says, usually helps him tide over things when he’s stuck. Curiously though, it was his turn to help her out this time around.

“Her grandmother had just passed away and she was over at my place. We were talking about this, about losing someone close to you, and decided to try and write something about that feeling.” Lothika wrote most of the words and a lot of it came from the notes that she had made in her diary. Kabeer praises her songwriting skills, and describes her vocal texture as incredibly evocative. “I sat on a piano and came up with this chord progression that had this really melancholic and nostalgic vibe.” The song also features strings by Yoed Nir who has collaborated in the past with Regina Spektor, Rufus Wainwright, Yael Naim, and has featured on nearly seven hundred albums across various genres. “I just sent the track out to Tel Aviv and wanted someone to record live strings for me, which turned out great!”

For the hard to impress few who are turning their noses up still, there is more to OAFF than just the Maths and Physics degrees or his original music. He also moonlights as a jingle maker and has composed for brands such as Maruti, Nissan and H&M as well Amazon Prime web-series Inside Edge. But a glimpse into his social feeds also reflects a passion for something more creatively inclined and all-encompassing in the sense that it involves music and visuals – shorts. These comprise of videos spanning under a minute, having taken inspiration from Bill Evans to Raag Hamshadvani, with the track stretched to create ‘floating pads like texture’ with soothing piano and visuals of the wings of an aircraft slicing its way through layers of clouds.

This seemingly indulgent yet worthwhile exercise, the results of which he puts out at fairly frequent junctures also feature themes such as symmetry in lines, nostalgia captured in distorted lo-fi sounds, visuals of ink dissolving in water, melancholy, contemplation and even an Emily Dickinson poem. One of these shorts titled ‘Descent’, featuring some superimposed rhythms might just develop into something more as he’s working upon it with an album release slated for sometime late in March. It also makes one wonder if the inspiration comes from composing music for ads. “It had nothing to do with the ad world. I love creating these sound atmospheres, sort of these sonic environments which evoke a certain feeling without really telling you too much. These kinds of things work well with visuals, because it becomes this one being piece of audio visual art that you can be immersed in.”

‘Heavy Headed’ is the latest single in collaboration with Ambika Nayak aka Kayan.a. Its quirky video which got featured on VH1, carries forward his penchant for infusing the every day with just a tinge of the surreal. The upbeat mood of the track belies its sombre lyrical layers that speak of lost love. The video features OAFF, Aisha Ahmed and Kayan.a taking in the sights and sounds of South Bombay on an evening while gorging on street food, hopping onto a Ferris wheel, biting into cotton candy and goofing around with a rather large Michael Jackson clay mask.

“Another interesting part of this story is that my amazing engineer for this song, Prathamesh Dudhane, was selected for a ‘Mix with the Masters’ workshop in France, which was being conducted by eight-time grammy-winning engineer Tom Elmhirst. Prathamesh played this song to him, and apparently, he fell in love with it. He played it for everyone and even got on a con-call with Ambika and I telling us how much he liked it. That was really encouraging for everyone.”

There is a debut album on the way, and plans are afoot to also put together a live set that retains the essence of the music that has been produced. When one tries to piece together a narrative that has gone into making OAFF, there is certain synchronicity to everything that’s on offer despite his conscious desire to keep structures at arm’s length and make his peace with vagueness. Perhaps a blend of reverse-engineered orderliness, and ingenious bedlam is what makes it all possible. And what about the math? Does it still feature in his thinking?

Kabeer says that he still spend a fair amount of time reading up or listening to talks on physics. “The mathematics of rhythms and the mathematics of harmony are super fascinating and when I initially started getting really into music theory years back, I totally geeked out on these things.” He says his brain always starts converting the music he likes into these mathematical structures to understand it in an abstract form and then compare it to other things he has learnt. “When I was much younger, I was at an Indian classical concert and I started listening to the connections between different western modes (scales) and the notes used in raags. Of course, later on, I learnt more about the Indian raags and how they are way more complex and nuanced, but this helps me codify and remember things, sometimes finding links between things that might not be apparent.”

And now the moniker fits.