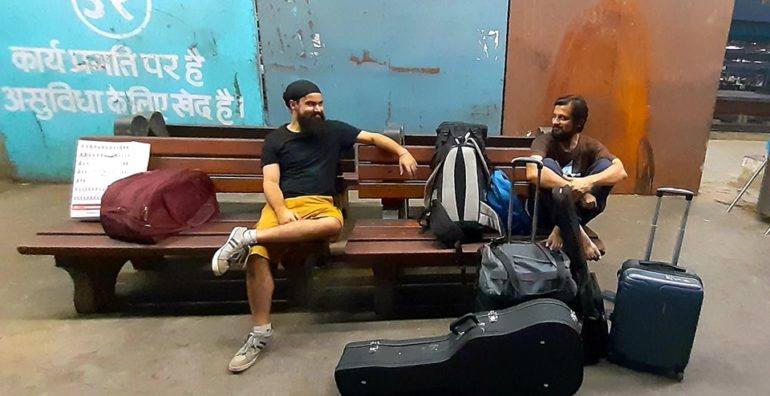 The ‘Hai Khabar’ tour featuring musicians Samar Mehdi and Saby Singh is nothing less than a case study for aspiring musicians, especially singer-songwriters. The 22-city-tour began on June 7 and concluded on July 25. They played a total of 25 shows at venues ranging from dedicated live music spaces to drawing rooms and were supported by a Chandigarh-based artist management and programming company, Worker Bee.

Two months and another EP release later, Mehdi shared with A Humming Heart how they conceived the tour and what went into preparing for it.

To begin with, although Worker Bee helped the musicians shortlist the cities and venues and the respective deals, the two musicians were on their own through this experience taking care of each other’s tech, logistic and artistic needs. And the fans were receiving updates on every little detail of each show as the tour progressed, beginning with Singh’s hometown – Jammu.

“The cities chose themselves,” begins Mehdi, answering a questionnaire that revolved around the nature and outcome of the tour. When the tour was announced, some of the cities felt like forced inclusions. But as Mehdi clarifies, these cities added more value to the tour and further validated the decision.

After performing in Jammu, Solan (Mehdi’s second home) and Chandigarh, the tour reached Lucknow. It was a new city and experience for both Singh and Mehdi. Therefore, the fourth stop of the tour turned out to be the real litmus test for Hai Khabar. Mehdi confirms, in his detailed reply, that Lucknow, in fact, amazed them. “It was the first sold-out gig of the tour,” says Mehdi. “And the way it unfurled the enthusiasm of everyone involved took us by a surprise. This is where we knew that we had truly breached and reached, and were making the right kind of noise.”

And they, truly, were making the right kind of noise by now. A sophisticated and sensible usage of social media channels followed. Daily updates and properly timed posts provided the on-ground activities more and direct impact.

Mehdi and Singh were not alien to the idea of performing in tier-two and tier-three cities. They already had experience of performing such audiences which helped them tailor their approach and expectations. “We know how enthusiastic the people from these cities are and, to be honest, this was one of the biggest reasons behind calling our tour ‘Hai Khabar’ – We already knew these cities have potential in terms of audiences waiting to be won over, and through this tour, we kinda told everyone else that. And now it’s for everyone to explore! It’s already happening – so many musicians are now doing elaborate tours and making these cities parts of their tours, which is heart-warming to see,” informs Mehdi.

Mehdi had personal and professional ambitions with the tour. The Bhopal-based musician wanted to announce that he is “here to stay” and “deserved our attention”. For Singh, his music demanded finality and a series of gigs would allow him to finalise his sound before hitting the studio again.

Owing to their popularity in these cities, the musicians performed twice in Mumbai and thrice in Bengaluru. The tour went mostly as planned, except some issues which led to of the gig in Noida. When asked about the outcome, Mehdi emphasises that he would not change a thing if he had to plan it again. “We grew more in those one-and-a-half months than we did in possibly years and above all, we came home reassured about our music on such a level that cannot be described in words.”

So what are the essential dos for a DIY tour like this?

Planning: Have a management that can take care of planning and execution.

Packaging: Tie up with enthusiastic venues and promoters who will allow your artistic experiments and ambitions.

Preparation: Be educated about the tech challenges that may arrive at the last moment.

Purpose: Have a defined purpose. Ask yourself this, “What purpose will the tour serve?” and then devote all efforts to that cause.

Pre-tour awareness: The most important part is knowing that you’re up for it, and not just in spirit, but in terms of where you are in your career.

Precision: When it is timed right, it becomes larger than life.

Partners: Find another act(s) that compliments your passion and purpose.

Patience: Put your music out and wait for it to grow before going on the road on an elaborate tour can serve the purpose of elevating it to the next level.

Packing: Basics are everything. Pack as light as possible.

Performance: Focusing on health, rest and sleep can prove to be decisive. What you eat (and what you blacklist from eating) can make or break your tour.

Psychology: Warming up before each performance and cooling down after it, especially when there are shows on consecutive days, will save you.

Post-gig analysis: Follow up the tour with an EP or single release to observe if the exercise has led to a newer fanbase. This acts as a full-proof survey of sorts.

Promotion: Update every show with as many details as possible. This not only adds to the hype but provides you with real-time feedback from the fans.

Mehdi challenges the newly emerged argument that “everybody can be a singer-songwriter” with “everyone should try to become a singer-songwriter.” Mehdi provides his own example to defend the statement. “If you succeed at creating something worthwhile, for starters, it will change your life and it will affect, if not change, the lives of others. If you fail, you will realize just how unfair the original statement was and you can hopefully stop going around saying stuff like that from behind a virtual wall. And if you die trying, which you’ll soon realize is the likeliest possibility in the singer-songwriter space, you’d at least do it with the knowledge of how it different it actually is from how it might appear. So, win-win(-win),”

There are obvious pros and cons for a solo act on a DIY tour when compared to an entire band. The journey would virtually spiral into solitude or lack of emotional support, but as Mehdi points out, “I have complete creative control. There’s nothing anyone can say that will take any of this away from me. Those who get it, get it. Those who don’t, won’t.”

So what’s the advice for any creative mind willing to live on the edge? “It’s truly a different world when you allow yourself to experience it and all it needs for you is to get out, no matter which field of work you may be indulged in. Take an opportunity or make an excuse – Get out and put yourself about, and you will see what you’ve been missing out on,” concludes Mehdi.