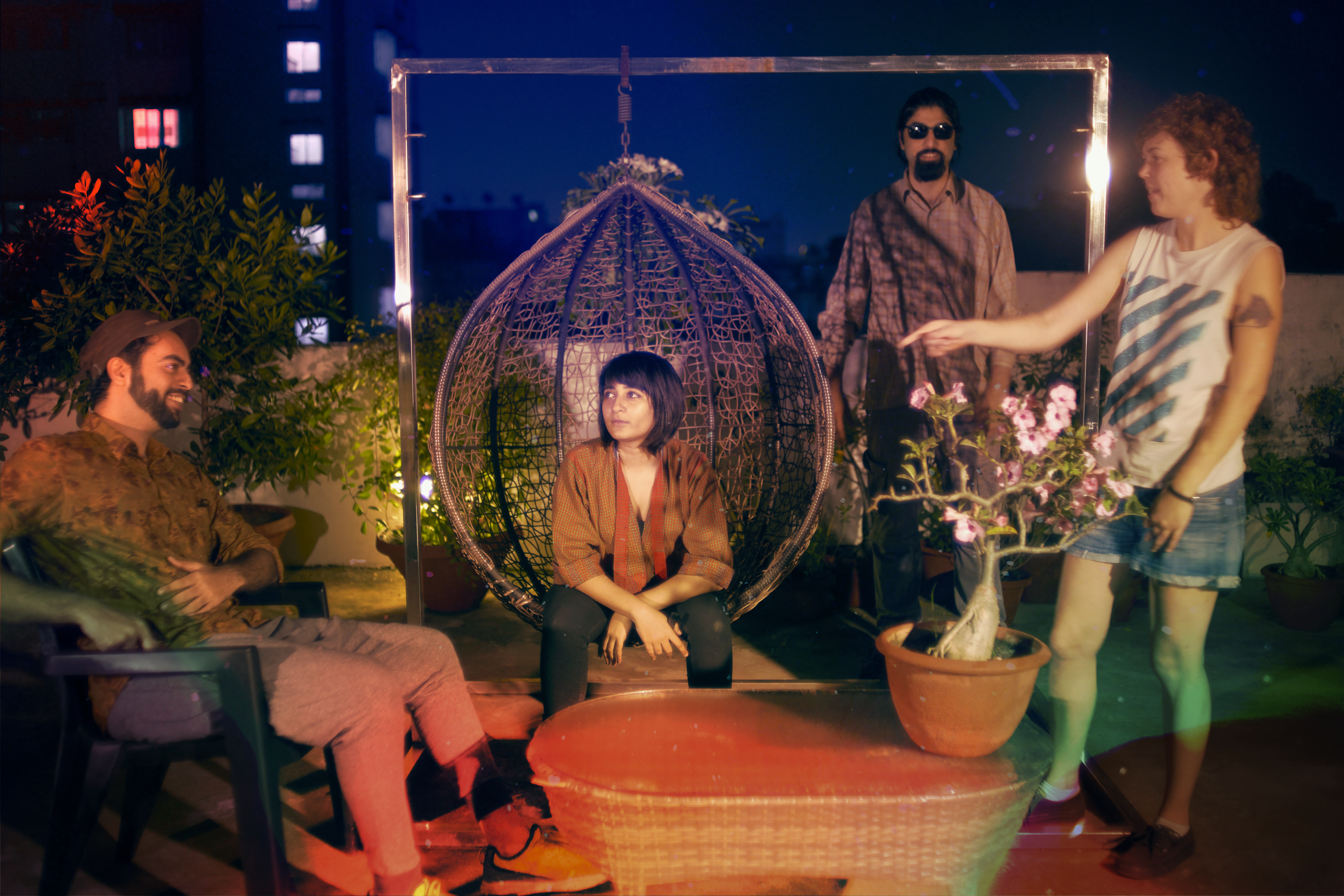 In November 2018, the Berlin-based guitarist Theresa Stroetges aka Golden Diskó Ship, was in Kolkata for the two-month Border Movement Residency at the Goethe-Institut and was looking to work with local musicians. She happened to meet electronic music producer Varun Desai. Desai brought songwriter Suyasha Sengupta aka Plastic Parvati and double-bassist Debjit Mahalanobis and Hotel Kali was ready to jam.

The band which tests the bounds of experimentation with its music, will be releasing its eponymous debut album next month.

“When people from different musical, geographical and cultural backgrounds work together and not think they have to create something that fits into a trend, they come up with something unique that’s more than just the sum of their parts,” says Desai about what this project represents.

Besides being inspired by the Hindu goddess Kali, the band name is also a reference to the most famous Eagles’ song which is a favoured song of the city’s sound technicians during soundcheck. The thought-provoking album artwork has been designed by Opashona Ghosh.

On how the music came to be Stroetges says, “Everything happened with the four of us in the same room. We usually played until someone came up with something we all liked. Then we stuck to that element, kept adding stuff and developing it further.”

With Sengupta and Desai both being electronic artists, one would assume the sound to lean in that direction. Synth-geek Desai, however, went to town with a bunch of instruments including vintage analogue synthesizers and a drum machine to create the rhythmic basis of the songs.

“My drum machine played a big part in how I approached each track. Most drum machine-driven songs are associated with techno and house but because we had all these instruments thrown into the mix, the sound went into a different territory. I like to compare it to the motorik beat driven kosmische music that came out of Germany in the ‘60s-70s,” he says.

Combined with this machinist approach is a love for humanising melodies that is the central nerve of some songs like ‘Say When’ and ‘Disco Shobar’. Primarily played on the warm tones of Stroetges’ guitar, they are complemented by electronic fillers. Contrarily, the synthesizers paint the background with ambient sounds, intelligently placed tinkling sounds and spacey sound effects on most tracks. As a result, Hotel Kali’s futuristic-leaning sound is a cross between cosmic rock and uncharted ambient explorations.

“The experimental electro-acoustic nature of our sound was secondary to the process of creation. For me, there was no conscious choice of genre. It was all in the flow,” says Mahalanobis, who hooked up his double bass to a delay pedal for the project.

This penchant for experimentation finds a heavy presence on the album opener ‘Intro’ and the obscure ‘Viola Rave’. The former seems like a science experiment where several knobs are being turned on a musical machine which emits atonal sounds. The central rhythm of the human heartbeat is almost eerie in this context.

On the other hand, ‘Viola Rave’ dances outside the realm of human imagination. Starting out on a generic electronic dance music beat, it goes into a completely avant-garde zone when Stroetges introduces the maniacal viola.

Talking about the album’s concept as a whole, he says, “From the heart beat in the first track to the chaos at the end, it is a musical journey starting from nothingness and ending into nothingness.”

The bulk of the seven tracks are instrumental. Interestingly, even the vocals, mostly of Sengupta and Stroetges, have been treated as another instrument. It comes to the foremost prominently on the Stroetges’ composition ‘Fake Horse’.

On the album ender ‘Calm-Strong’, the vocals is the human bridge to the ephemeral question of identity as the music floats between the subconscious and the unconscious. Hovering guitar lines, melancholic high-pitched sounds and slides on the bowed bass give way to a disturbing chaos that one wishes will end soon.

The songs are written in Bengali and English and songs have no overt German or Indian elements. This is in line with their conscious decision of staying away from the clichés of “global” or “fusion” music, where particular cultural features are highlighted.

“Instead of restricting ourselves to a familiar sound, we chose to let our hair down and see what we could come up with,” says Sengupta.

The album will be out on June 4.