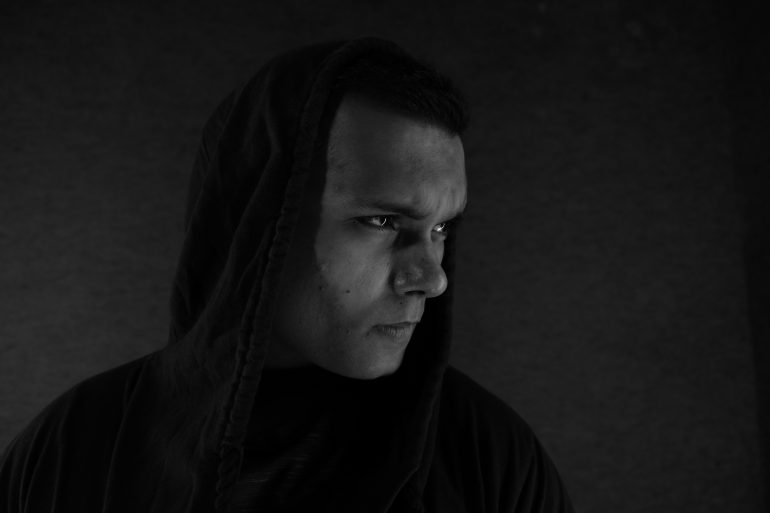 Hautewulf on creating an audio-visual franchise

Delhi-based DJ-Producer Mohan Kumar aka Hautewulf has been active in the independent music scene for well over 10 years, having played for metal outfits like Pyramid and Alien Sky Cult. However, it was a hiatus from playing metal that sparked the beginnings of his new solo venture.

And the result is now out for us to hear in his debut EP, Addicted, a heady audio-visual concept package. Set in a futuristic universe and drawn from sci-fi and cyberpunk, it documents the aftermath of a human android consuming a psychedelic drug.

Turns out, following his instinct to step away when playing metal began feeling “robotic” paid off big creative dividends. It took the artist only a few hours to prep the base script of his universe and characters he had begun imagining. Flash-forward a few months, and he has written an EP based on the storyline, with more to come.

The producer’s diverse set of influences come together in this 3-track EP. Tenets of cyberpunk and synthwave are punctuated with industrial textures and skittering percussion. With ‘Cravings’, he invites the listener in with lush atmospherics, mournful piano lines and a sheath of melodic synths. Next up, ‘Different Realities’’ meandering basslines float atop percussive strums as the protagonist traverses paranoia. All hell breaks loose on ‘Consequences’, a slice of chaos stuffed with Kumar’s glitchy frenetic take on drill n bass. This one will send you straight out of your body, no psychedelics required.

That said, Addicted is just the first instalment in the cyberpunk and adjacent themes he plans to explore. An extended visual version of the EP featuring hand-drawn illustrations and 2D/3D animation is on the way.

The producer realized early on that giving free rein to his creative sensibilities required dabbling into different forms of expression. “I realized a few years ago that my music was missing something and it had some boundaries which we label as ‘genres’ in a universal sense. My goal is to polish the art of storytelling through music.”

His inclination towards crafting immersive narratives came from video games, sci-fi/cyberpunk films, and watching old cartoons as a child. “My vision is to build a universe like the ones in these video games and movies which provide the audience with a chance to explore as much as they want and predict as much as they can”, he says.

The cinematic quality in this EP is hard to miss. It’s not surprising either, since Kumar credits discovering film score icon Hans Zimmer’s work as a turning point in his journey. “I see myself as one of those concept background music composers and my ultimate goal is to become one.”

It is clear that he thinks in terms of the big picture, and has already got ideas churning for what’s next. “I’ll be working more towards concepts like futurism, Modern/Cyberpunk lifestyle, machine rights, human androids, time travel, singularity, and uploaded consciousness. The plan is to establish these releases as The Hautewulf Universe Original series.”

Having put all his savings into this project, he is candid about the stakes underlying his big-picture thinking. “I come from a lower-middle-class family with absolutely no scope for choosing music as a full-time career. As an independent artist, you need to have a stable source of income to invest in such projects. Music is such an expensive hobby and in my case, I have to provide for the family as well.”

Self-financing projects is one of the harsh realities of being an independent artist. With huge monetary costs involved, particularly in large-scale efforts like this, supporting independent artists by purchasing their releases becomes all the more important.

For now, the beatmaker has already begun brainstorming an improvised performance of the EP. In fact, he’s already in talks with Sonic Shori, the jazz bassist featured on ‘Different Realities’, about live set ideas. “I am interested in creating a live hardware setup with a midi guitar and more musicians around me to perform the kind of music I’ve been trying to produce–with absolutely no boundaries.”