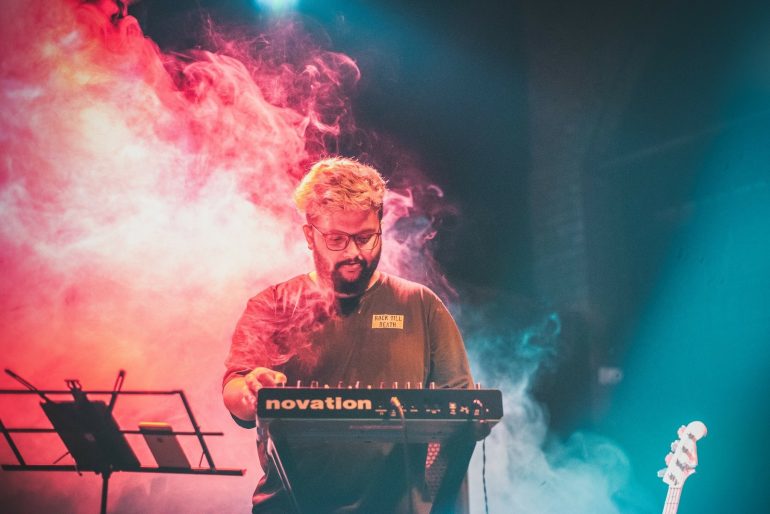 “Every mother is a legend. Mine just was this coach that believed I could be the MVP even when I was sitting on the bench”, recalls Hashbass aka Harshit Misra, one of the country’s most prolific bassists. Now, a year after his mother’s passing, he recruits some of his most talented colleagues and friends to honour her memory on the soul-stirring, ‘For Anita’. The track is an ode to Anita and mothers everywhere. “It represents the love, care, affection, strength, fight, and pain that she went through”, he adds.

In collaboration with Shubha Mudgal, Warren Mendonsa of Blackstratblues and Grammy-winning engineer John Davis, the song kicks off Misra’s first release as a solo artist and producer. The slow-burning fusion track penned by Mudgal comes with an incredible interlude by Mendonsa in the second half.

A lot of careful deliberation went into choosing the right collaborators. “I am blessed to have colleagues who are also good friends; who believe in my way of working with music, and are equally dedicated”, he says. Drummer Nikhil Mawkin, a former bandmate, was picked for his innovative technique. Ranbeer Sidhu, a frequent sounding board for the bassist, was then roped in as sound engineer.

Shubha Mudgal had always been his mother’s favourite, and coincidentally, the artist Harshit had been performing with right before her demise. He knew only Mudgal could infuse the song with the rich emotive tones he hoped to convey. “She bought recording equipment, learned ways to record, and sent me her takes which made me cry”, he tells A Humming Heart.

The ideas for solo material were planted on tour, where he would floor everyone from artists to sound engineers with impromptu basslines and off-the-cuff arrangements. When asked about his own music, he would struggle to answer, but knew it was a long time coming. “My responsibilities for the past six years were totally different and demanded a different me altogether. Hence, when the lockdown happened, boom! I just had to do it.”

‘For Anita’ also marks Misra’s first release under Pagal Haina Records. “Three weeks before my mother passed away, I was in such a mess professionally”, he explains. He reached out to founder Dhruv Singh and a month later, was signed onto the label’s roster. “It’s been one of my biggest blessings that he sees what I do not see in myself.”

He says the same thing about his mother. She pushed him to pursue music and supported his decision to drop out of college to do so. In fact, the artist’s earliest musical memories were shaped by her love for Western music. “The first few sounds I ever heard were from ABBA, Boney M, Stevie Wonder, Michael Jackson, George Michael”, he reveals. Misra also picked up his robust work ethic and warm demeanour from her.

When asked about his favourite memory together, he discusses their daily walks from his Granny’s house to the family home. “These walks would be just me and her talking, me telling her how bad I was at school and what fascinated me, while she told me how things would be good even though we saw a lot of problems. We walked all seasons, even the rain”, he recalls.

Celebrating his mother’s legacy through the Anita Misra Memorial Trust helped the artist work through the loss. “Closure is something that one can never get when you lose someone very close”, he states. The track’s proceeds will go towards a Trust which aims to support underprivileged families with pre and post-surgery medical relief.

Hashbass accepts that he is now past survival mode and has begun thriving. He’s got big plans, which include smiling more and running a 5K. “The vision is, and has been, to be honest with what I make even if it’s one bar of music, just gotta own it.” While waiting for session work, the artist is focusing on building his solo repertoire, experimenting wildly, and pushing the boundaries of what he can create. Collabs with Bangalore rapper Hanumankind and singer Benny Dayal are also in progress.

Misra surely does remind us that hope is a powerful force, sounding more level-headed than ever. “I do know the future is gonna be bright, humbling, and every day I will give thanks to God and to my Mom.”