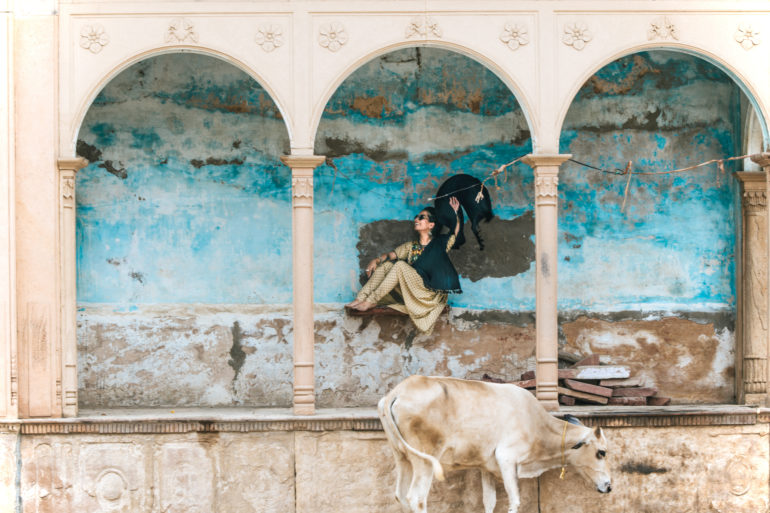 Delhi-based musician Mahima Dayal Mathur, aka Bawari Basanti, just released the first single, ‘Chale Kahin’ from her EP Underwater in June along with a music video on YouTube (self-shot in her bathroom, for which she probably took a bath a dozen times to finally get it right).

She says the song is the reason why she loves what she does. “A, because everything about it is homegrown; and B, because I am finally able to express my feelings accurately with my music,” she elucidates.

“The track’s beauty lies in its imperfection, and the lyrics speak about the feeling of being incomplete, giving it a haunting yet inspiring vibe,” she adds. Bawar Basanti’s work is known to concern itself mostly with ideas of identity, doubt and dreams in a dystopian state. “I try and write about stuff that affects me, and makes me feel things that I am not able to express otherwise,” she elaborates. “It’s like therapy…The words are just a release, from the reality I live in,” she adds.

It was her grandmother, Late Smt Lalita Dayal, who taught the 9-year-old Bawari Basanti classical music. Understandably, she owes most of her earliest musical influences to that precious time. Her grandmother would play the Bhatktimala almost all the time in her bedroom. “These cassettes comprised bhajans and songs by so many amazing artists like Shruti Sadolikar, Bhimsen Joshi, Pandit Rajan and Sajan Mishra, Gundecha Brothers, Kishori Amonkar and Veena Sahasrabuddhe to name a few,” she reminisces. Their voices, always at the back of Bawari’s head, have played a significant role in shaping her vocal delivery techniques. Apart from this, she was also greatly influenced by Shubha Mudgal’s Ab Ke Sawan, when it released and gained popularity in the early 2000s.

In 2013, when she was studying journalism at the Asian College of Journalism in Chennai, Bawari received a perplexing call from her hospitalised grandmother. “Just focus on your education; there is no need to worry about your radio recordings and music career. There is no future there.” That was the last time she heard her voice. Things changed after that. All her life, Bawari had taken her grandmother’s music classes for granted. After she was gone, she struggled to find a guru and was confused about how to go about learning. She even questioned if she wanted to learn at all.

I wanted to learn how to express myself more freely using my voice and words.

Fortunately, at the time there used to be a Mr Sheetal who believed that she had potential. He kept pushing Bawari to clear her exams and get a degree in Hindustani classical music while also working as a journalist at The Sunday Guardian.

A year later, Bawari realised that she wasn’t able to express herself the way she wanted to as a writer. “I wanted to learn how to express myself more freely using my voice and words,” she recalls. Just then, she got a scholarship for the Swarnabhoomi Academy of Music in Chennai to learn performing arts. It was here that she genuinely freed up as a musician and was exposed to new music and ideas. She also worked as the academy’s marketing and administration head while studying. The conducive environment allowed Bawari to figure what she wanted to sound like as well as practice the basics in an organised way.

Back in Delhi after the stint, Bawari wanted to hone her knowledge of classical music further, so she went to Bhopal to learn from the Gundecha Brothers at the Dhrupad Sansthan. “I continue to go to them in times of doubt and to break away from the city’s extremities,” she says. During this time, she also learnt from her aunt, Jyotika Paust, who used to teach Hindustani Classical at the capital’s Shri Ram Bhartiya Kala Kendra. This was when she formed her first act with Azhar Anwar on guitars, and they called it Basanti aur Woah! “The experience taught me how bandmates become family, and how our music is majorly a reflection of who we are as individuals,” she says.

Which begs the question, many might be curious to ask her, “Why Bawari Basanti?” She explains that Bawari Basanti was a pen name that she used to write for publications outside the newspaper that she was reporting for in 2013. The company’s policy did not allow the employees to write for multiple publications, but money was tight, and she wanted to do as much as possible. As a result, she would do other jobs under this pseudonym. A few years and a couple of jobs later, the name stuck. It gradually became like an alter ego for when she needed to perform on stage and not be affected by her work personally.

Apart from Azhar Anwar, has collaborated in the past with notable artists such as Zion Train (Neil Perch), which she believes has been a great way of learning for her. “Just to see how they work on their music and the way sound can be treated differently by so many musicians has always amazed me,” she explains.

Her track, ‘Storm’, along with Akshay Johar (Mojojojo) was nominated for the Global Indian Music Academy Awards in 2016 for Best Non-Film Song. Further, working with her French band, Spicy Frog, was “incredibly fun.” “It was also an unforgettable experience performing in various cities in France, with a sound that was so unique and energetic!” she exclaims.

The scope of the independent music scene in India, according to her, is massive. “People want to hear honest new music. The more music you make, the more you perform and be vulnerable to your audience, the growth will be proportional,” she says.

When asked about her favourite artists, genres of music and songs, she says, “Right now, I have a ‘Room Cleaning Playlist’ on iTunes with artists and bands such as Masego, Ali Sethi, Nicholas Jar, Peter Cat & Recording Company, Shubha Mudgal, Tierra Whack, The Black Keys, Snarky Puppy, and Vulfpeck.” She constantly collects LPs by her favourite singers. The most recent one she purchased from Pagal Records, is a rare collection of all the thumris sung by Begum Akhtar.

Currently, she is working on collecting sounds and making experiential music. “I am learning to take from what comes to me naturally. So I am usually recording sounds from my everyday life and incorporating them in my tracks,” she says. Bawari will be going on tour from the 9th of August, starting with Lucknow, then Mumbai, then Goa and then back to Delhi and then Jaipur.