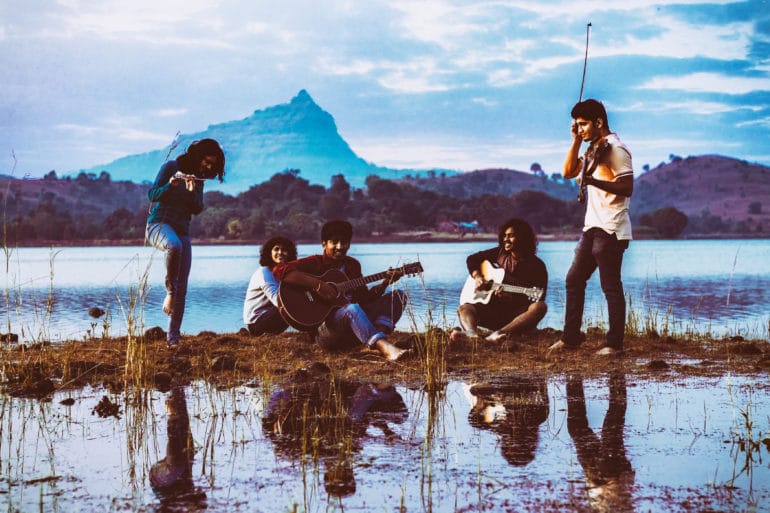 When their debut album As Written in the Stars released in August 2017, Easy Wanderlings were both nervous and excited to see how it would be released. “As a band, we were and still are extremely happy with the product that we created,” says 22-year old violinist Shardul Bapat. The ensemble, which was found in 2015, consists of nine members playing various instruments such as the western flute, keyboard, guitar, and the violin.

However, the soft rock/indie pop band’s work had just begun. “After the release, there was this pressure of making as many people listen to this and how people would perceive it,” says bassist Malay Vadalkar, who is the band’s oldest member at 29.

They started the work for the debut album in March 2017, and production was on the floors by April. The most challenging aspect of making the album was to accommodate each band member’s creative opinions and to fuse their respective influences and styles into the tracks. “What worked for some, did not necessarily work for others,” adds Sharad Rao, who plays the electric guitar in the band.

According to the band, their experiences are what set them apart from most other Indian artists. “Our songs are basically the experiences you’ve had or didn’t have or stuff you crave to feel”, says Sanyanth Naroth, who plays the acoustic guitar. “The various interpretations of your experiences is what makes one’s music stand out and makes people relate to your music and immerse in it,” adds vocalist Pratika Gopinath.

The most important apps on his phone are Notes and Voice Recorder, according to Naroth. “I often get into awkward situations where I get a good tune in my head in a crowded bus for instance and I have to keep my phone close to me and hum the tune and make sure no one notices me,” he says. “Since most of us are not technically trained, we spend a good deal of time to really craft our parts in the song, note by note and when we feel like ‘whoa that feels good’, we then go to the jam room to try it out,” he adds, talking about the process behind making an Easy Wanderlings song.

The band members agree on the fact that As Written in the Stars was the product of a lot of hard work, mixed with incredible fate. “This project has been a culmination of extremely unlikely but favourable events taking place consecutively leading to the birth of this album,” Bapat says, with Rao concurring, “We didn’t even have guitars to record with, but out of the blue on the day of recording we managed two incredibly high-end guitars, as well as a bass which contributed more than you know to the sound quality of the final product – many similar weirdly magical acts of kindness brought this album together.”

The Pune-based band often uses their everyday conversations to fuel the inspiration for their emotion-heavy and positive songs. “Positivity is always around, you just need to hold on, be patient through hard times and look out for the light,” quips Naroth.

Talking about the Indian independent scene Naroth says, “We need to build a culture where Indian Independent is given importance and appreciated. More radio and TV networks should show interests to feature indie artists- this would help a great deal.” He feels that the radio stations should do away with dedicated segments for independent music, and instead play it with regular Bollywood and international music. “Lessen the gap, and more people will listen,” he adds.

However, Rao does not share his optimism. “In my opinion, it’ll be a much longer time before their “reception” amounts substantially to a bands income, for example,” he says. “This is mostly considering the market; if you’re an independent band playing English music automatically your market shrinks down to a small pocket of people.”

Most of the band seems to agree on the fact that in a country like India, where the number of people willing to pay for music is still drastically low, making original music is the only way to go. Vadalkar says, “Well everything zeroes down to making original music. You’ve got to make original music, or else there is no point of being in this industry.”

“We make music because we want to, we feel it, we want to share it with the world,” Naroth adds. “At the same time for us artists we have to be smart to find other ways to make money through music while the music scene slowly takes a new shape.” Bapat agrees with his bandmates, concluding, “For the most dedication musicians, money is never the driving force.”

The band, which lists Prabh Deep, Ape Echoes, and Second Sight as its top three acts of 2017, is planning a huge tour throughout India to introduce its music to a larger audience. “I think the band’s main focus at this point is to increase awareness of our music and gain as much international acclaim as possible,” says Rao. “We have a lot of unreleased music in the pipelines, but releasing them has to be strategic to receive the most attention from them,” he adds while saying that there may be another record in 2019.

However, fans should expect various sounds in their sophomore endeavour. “The fact that every band member comes from a different musical background and is influenced by different sounds makes us experiment in the songs that we compose and perform. We are open to any kind of genre and we like to try different things. The only criterion is for it to be ‘easy’- however that maybe interpreted,” says Gopinath.

“As per the sound of Easy Wanderlings, you never know, while some aspects of our music are taking new shapes, some will remain the same,” concludes Naroth.