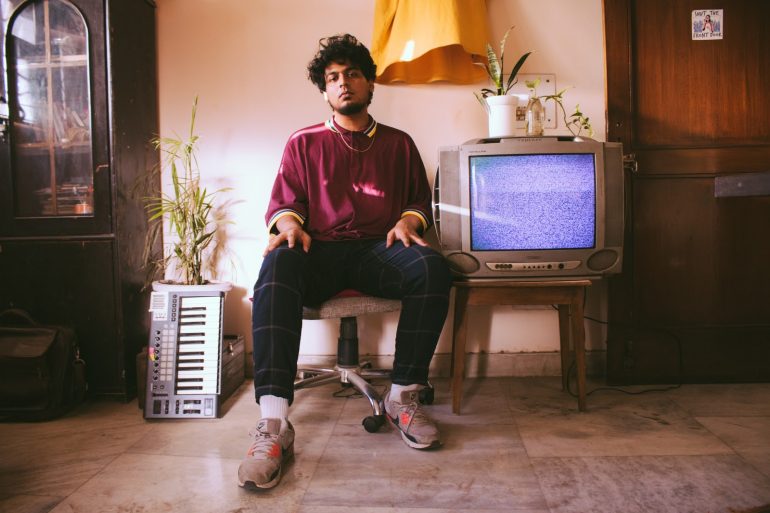 Dolorblind plays to his strengths in quicksilver EP Forbidden Fruit

A part-time visual artist and full-time music producer and also, a member of the Jwala Collective, Sinha has been serving fresh cuts intermittently on Jwala’s mixes these past couple of years, while posting unfinished snippets on his socials. His association with indie record label TAABIIR, dating even further back (when he joined the crew as a design consultant in 2017), a new record was only a matter of time. “Communication has always been a strong point, there was no pressure… it’s liberating to have more control over my art,” Sinha tells A Humming Heart, excited about the launch.

At an online set for WILD CITY’s fundraiser for COVID-19 relief efforts, Sinha played some of his unreleased music including a few cuts off the upcoming EP. It was only in November that he teased the new project with a short prelude titled ‘END/BEGINNING’, to the tune of overwhelming support and a shout-out on Boxout’s Motellacast show last week.

“To me, Forbidden Fruit isn’t what it means to others,” he explains. “It is about being gradually cut off from the freedom that defines our childhood – in its purest form. The experiences of growing up taint it and it becomes a forbidden fruit. I wanted to capture and immortalize those memories and be able to revisit them through this EP.”

The record flows beautifully and quickly from the demure ‘Free Fall’ to the quicksilver ‘Hue Island’, preceded and followed respectively by more avant-garde tracks like ‘Control Your Anxiety’ and ‘Bloom’. As Sinha reveals, there are songs written in recovery from a panic attack, and in the languor that college libraries afford; tracks penned down “when I was visiting my parents in Patna, or at my house back in Delhi,” he adds. “Whenever, and wherever I found a moment to preserve an emotion or feeling, I would do it – by recording sounds, or by coming up with a hook and ultimately, writing the music.”

In Forbidden Fruit, Sinha manages to bring his best and most successful sounds together with a sharpened sensibility, backed by graceful manoeuvring of various sounds, including some very unconventional ones. Like a non-diegetic soundtrack of a movie, bursts of TV static, the clickety-clack of typewriters and the dawn chorus of birds add to the atmosphere in Dolorblind’s world, enhancing the finesse in rhythm and production.

A connoisseur of ambient noise, Sinha says, “When I make music, daydreaming is my way of imagining. I use these sounds to emulate the space or moment that I had experienced, to replay time in a way.” Being a lover of the arts and a keen observer of life, Sinha seldom restricts his influences to the realm of music. “I take inspiration from people and the events that shape their varied personalities and tastes. I try to bring together this diversity to life through my music,” he elaborated.

For some tracks, Sinha sets tranquil melodies to drill ‘n’ bass à la Aphex Twin (on ‘Control Your Anxiety’) or gets down to Apparat-esque “elegiac techno” (on ‘Bloom’ and ‘QQ’), even tracing early-Mogwai-style post-rock (in ‘Free Fall’ and ‘Wind to the Moon’). Then ‘Hue Island’ comes along, with its breakneck synth line forming out of an echoey intro sampling an Adventure Time-tune, giving it both the dreaminess of Wuhanese folk-rock outfit Hua Lun and the left-field folktronica of Mid-Air Thief.

What these genre-melting sounds create is impressive. Right from the moment the needle drops, Forbidden Fruit gears you up for an immersive, sensory journey across the mood board, in just a little over 30 minutes. Needless to say, there is a lot of drama in between the beats.

If Dolores proclaimed Sinha as one of India’s budding producers, Forbidden Fruit consolidates his footing more firmly in the burgeoning electronic space. And for a city that eagerly awaits a revival of its nightlife, it’s easy to hope this is the first of many Dolorblind records we get to catch live in the coming years.

Forbidden Fruit releases on all streaming platforms today. Listen to it below.