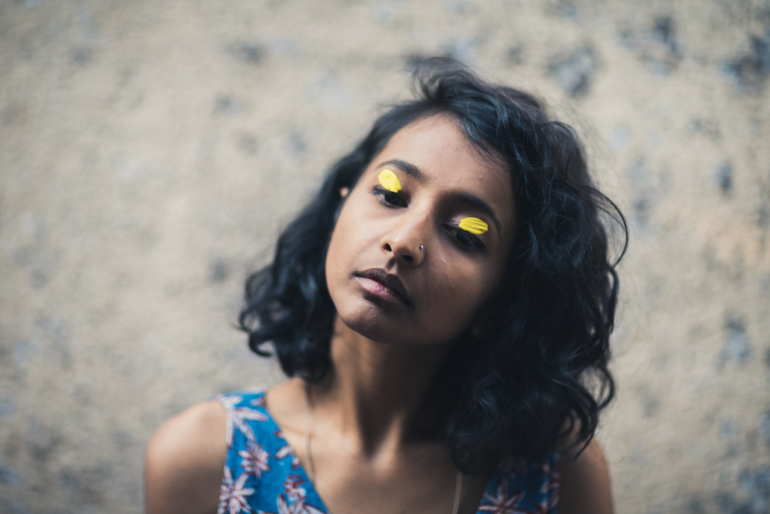 Ditty on using her music for the preservation of planet Earth

In theory, the combination of an ecologist and a musician should not make sense. But it does, in Aditi Veena aka Ditty’s case. Perhaps, the oddity is just a fault of our one-dimensional brains that have not yet been conditioned to musicians that try to evoke and provoke real change in our comfortable lifestyles. Ditty not only uses her voice and platform to bring to light the various issues plaguing the Earth, but also acknowledges and highlights the beauty of this planet.

Aditi Veena adopted the moniker Ditty before she started making studio releases. Similar to how she uses her guitar as protective shield while she stands behind it to sing, the alias also serves the function of an armour. The influence of music on Ditty goes back to her earliest days, when her mother would sing her to sleep. “I especially remember the one that went, ‘Papa Jaldi Aajana.’ since my dad used to travel a lot for work,” she muses.

It is only obvious that someone who grew up in and around nature is so highly influenced by it. Ditty spends a lot of time outdoors, teaching people how to grow their own food or designing natural buildings. Juggling between her two professions, she spent a long time trying to merge the two disciplines. “But now I know they are two sides of the same coin – me. They are expressions of how I think and feel about the world. They intersect in unexpected ways. Like my EP Launch and the Album launch were planned in gardens. Also like the birds, oceans and trees found their way into the album,” she adds.

Every so often, she lays under the trees and makes compost. Her teacher, Clea Chandmal, who is a pioneering soil expert, says that anything that once lived can be composted. Ditty takes the advice seriously and feels a sense of achievement when she finds a way to tackle all her waste. In fact, she and her partner strive for a zero waste life. She explains some of the practices she has adopted in her daily life – “It’s possible to do even in cities. I believe every action we take through the day has an impact on the planet. Whether we use climate control at home, the mode of transport we take, the food we buy, the gadgets we use, the waste we produce from everything and the time we take off, to ourselves. It’s not enough to use a bamboo toothbrush or an eco-friendly detergent anymore. We have to come together and make conscious decisions and really make some drastic changes to the way we live because the system makes it really hard for us to do so. Also, we can all plant trees!”

Ditty finds music in everything. “The universe functions in patterns over space and time. That’s how we make sense of the world. That’s how we listen to music. The flowers make music by blooming at a particular time of the year. The Earth makes music as it zips around the sun at 60,000 miles an hour. The bees, as they buzz through the fields. The rivers make music as they flow out into the sea. And we, we’re making music all the time by just breathing in, breathing out in synergy with the trees,” she reflects.

Love is the dominant theme in music, as it is in other forms of art. Ditty’s music too talks about love – her love for nature and life. Her thoughts, informed by her background in ecology, seep into her music. She hopes to make more records about the wonderful planet and work with more artists or people working around similar themes. She hopes with everything she has got, “there will be a lovely planet left for our children to witness.”

On Poetry Ceylon, her “experimental” new album as she describes it, she hopes to get as many people as she can together as a species to take a stand for the Earth. She says, “I am hopeful about the Earth, however, life continues to shrink at an unprecedented pace. We’re losing evolutionary resources that evolved over millions of years, every day to human greed. We’re losing the beautiful expression of life as we know it. And we’re continuing to torment and oppress nature (including humans too).”

This album, set to release on 3rd June 2019 with two singles already out, was also recorded by bringing many (talented) musicians together. Dhruv Bhola (PCRC + Bowls) arranged the record, and Shantanu Pandit (Morning Mourning + Run it’s the kid) recorded it in Ditty’s bedroom. Mathias Durand (France) mixed it, and François Lê Xuân mastered it. Karthik (PCRC + Begum) helped record while Nikhil Vasudevan (Ska Vengers + Syncopation) appears on drums. Michael Ketigian (inverse K) wrote some poetry with her. She also worked with Ishaan Gandhi (Okiedo), Jayant Manchanda (Kitchensink) and Alex Gower (Little Switzerland) in the early stages of the album that helped shape the ideas for the record.

As the name Poetry Ceylon suggests, the album is heavily inspired by Sri Lanka and the time Ditty spent there. Unfortunately, in the wake of the recent multiple suicide bombings in the country, this has been a difficult time for Ditty. When asked for her comments on the same, she solemnly says, “It’s been disastrous news in Sri Lanka. However, I am deeply grateful that my friends are unharmed. During my few years there, I only experienced uninterrupted peace from the various communities. It’s been a difficult time, and I feel there’s no better time to celebrate the spirit of the beautiful island and its people. There’s no better time to celebrate peace, love, kindness, joy, diversity and unity– all the things that Sri Lanka stands for. Darkness cannot drive away darkness. Only love can.”

By urging us to step out of the city bubbles and look beyond, Ditty directs us to the beauty of the world. In a ragbag of threatening issues and powerful bystanders, Ditty stands out as a lonesome blooming flower.

You can find Ditty on streaming platforms here – https://fanlink.to/deathcab